The Found Schedule Of A Found Footage Film Festival

Thirty days ago, Nathan Mueller decided to organize a festival for fans and creators of found footage films.

Over the following weeks Nathan's behavior became erratic. He kept odd hours, alienated friends, and engaged in increasingly irrational behavior. Thirty days after beginning the project, he disappeared without a trace, leaving behind a closet full of clothes, his wallet, and cell phone. He was never seen again.

The following has been pieced together from the scattered piles of paperwork in his home office. It seems to be a work-in-progress schedule for the festival that never occurred, along with clues as to his state of mind and eventual fate.

The Untapped Potential Of The Genre (Lecture) - Found footage films tend to be horror films, with occasional forays into the worlds of monsters or superheroes. Why haven't we seen a found footage romantic comedy, or a found footage western? This will be a lecture on all the possibilities that have yet to be explored.

Huh. As I was typing that, I realized that something had been pressed against my office window for quite a few minutes. When I glanced up it disappeared. For just a moment, though, I could have sworn that it was a nightmare hell face. Oh well. Probably just my nerves! 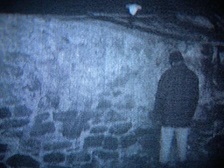 veryone meets in the park, then looks for reels of film and memory cards. The person who finds the most footage gets a cheap digital video camera and a brand new de-stabilizer, which can turn even the most perfectly smooth camera work into a shaky, out of focus, distortion-filled mess.

There was a knock just now. Without looking up from my desk I yelled to let the knocker know that the front door was unlocked but no one came in. After a few moments I opened the door myself, slowly looking left, right, then scanning the dark woods across the street. No one. Yet somehow I felt... watched. As I squinted, the knock came again. It was from the office closet. Cautiously approaching, my heart practically beating out of my chest, I pressed my ear to the door. Faintly, as if from a great distance echoed through a cave, I heard a child's voice urge someone to "go away". Licking my lips, I flung the door open. Nothing. Nothing, that is, save for a Newton's cradle clacking as though it had just been set in motion. Must have been nothing.

Creating An Evil Force (Discussion Panel) - How to take ideas from the internet and rename them for use in your found footage project. For example, every detail of the Slender Man mythos can be copied as long as you call him something new, like Scary Man.

I'm starting to feel pretty darn irrational. My friends came over today and asked if I wanted to go to the park and play a few games of Rational with them, and I refused. What's gotten into me? I've never turned them down before. Sometimes I wonder if that cursed book I bought on vacation was really cursed. How I laughed when the shopkeeper urged me to pick another book - any other book - but now I don't feel like laughing at all. Have I made a terrible mistake? Some part of me thinks I should throw the book away or burn it, but if I do that I'll just be giving in to superstitious mumbo jumbo, and I'm a man so that simply can't happen.

The Ideal Framing Device (Q&A Session) - How should a found footage film open up? The answer: Text. Always text, always explaining the mysterious events that led to the discovery of the footage.

Last night the basement door was open. Without hesitating, I went in. Followed the trail of blood to a crawlspace. Discovered hundreds of old timey dolls hanging from the rafters. Didn't seem too strange, until I realized that no matter where I crawled, every single doll in the room just happened to twist on their twine to face me. I'm beginning to think that something weird is going on. Maybe I should talk to someone about this. I'll give it another week.

Fish Fry (Fish) - We cook fish up and eat 'em. Not sure how this will tie into found footage films yet. MUST think of a way to make this work because I like fish very much.

I woke up with the code in my head. My eyes are sunken and red, the mysterious cut on my neck is inflamed. This has to end tonight. I'm taking the book into the woods to do what must be done. If I could have done one thing differently, I would have had fried fish more often. I'm so sorry. Don't follow me.