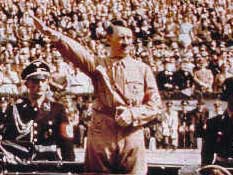 Oh look, it's Zack's boyfriend, they're going to the ice cream social together!

Greetings Something Awful readers! Today I, Rich "Lowtax" Kyanka, will continue with Zack "Head Exciter" Parsons' hourly articles detailing his mental masturbation over every single vehicle ever potentially touched by a Nazi! In this update I will cover the Straussenhagan GBS402 Heavy Pants-Shitting Laser Beam, the Fritzstchtrubluben Mobile Infantry Baby Carriage, and the highly wacky Heinfaustunguntutzifanzenwurst Lumber Mill which gave the Nazis the ability to upgrade the damage of their spears and thrown weapons. Ha ha, I am of course kidding, Zack "WWII Obsessor" Parsons would undoubtedly tear my throat out, pay to give me a throat transplant, and then force feed me my own throat if I attempted to encroach on his precious World War II monopoly. Besides, there are much more exciting and evil things happening in the world today, many of which involve America possibly being blown up by irate foreign people who despise us simply because we fly spy planes over their homes every other hour.

While the war on terror seems like it's so far from home, mainly because it is in fact so far from home, each of us has to face our own personal war on terror in our backyards, kitchens, and haunted barns. We live every day as if it could be our last, and in my case, it very well could be. I arrived at my apartment last night to see a ominous piece of paper neatly folded in half and taped to my door. This stormy petrel (dictionary.com's word of the day for March 3rd) was in fact a message from the management of my apartment complex, the people who are in charge of ignoring me when I ask them to fix various things. This letter hit me with a horrible sense of dread and raw terror, much like the time I found out "Galaxy High School" was canceled. Check this shit out, yo:

Did you read that? People in my apartment complex are getting knocked unconscious UNTIL THEY ARE DEAD! I'm living in some kind of bizarre suburban battlefield where each step is fraught with danger and the possibility that I may become unconscious and ultimately un-living if I somehow locate and walk into the "pool area" which I did not even know existed until this letter. I can imagine this mystical "pool area" as being a veritable paradise full of wine and roses, but like in any Dean Koontz or John Saul novel, it holds a terrible secret in its heart; some bad street brawler is secretly slipping people mickeys and suckering them into games of chance, leading to their untimely demise! To live in this apartment complex through the current firestorm of danger and menace is truly a testament to my personal character, as it proves I am not somebody afraid to "walk on the wild side" or "dive face-first into danger" or "become less lazy and actually move." I become a bit more tough each day I inhabit this deceitful deathtrap, and I can literally feel the skin on my arms (and most notably my palms for some reason) thicken as I grow into a grizzled war veteran whose entire life has been surrounded by heated conflict. Now I may not have any official credentials proclaiming my knowledge of guerrilla warfare, particularly in the field of pool areas, but let me assure you that I know a hell of a lot more about safety than my laughingstock apartment complex. For example, look at this ridiculous list of half-assed "safety guidelines" they included with the complimentary "oops, somebody done fucked up and died in the apartment complex" notice: 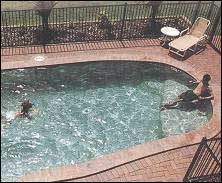 How do these two SIMPLETONS so foolishly pussyfoot around the pool area without fearing for their very lives? Simple: they pray for death.

"Periodically check your smoke detectors for dead batteries or malfunctions." At the risk of exposing my ignorance, I cannot remember a single time in history when the failure of dead batteries led directly to somebody being knocked unconscious to death in an outdoor pool area. I took the additional step of calling the apartment complex and I asked them about this, just to make sure (I place my journalistic integrity as the highest priority in my life):

As you can see, the halfwits in my apartment complex are clearly trying to skate around the truth like some kind of ballerina who entered a roller-skating contest despite the fact that she's never roller-skated before in her life, but she assumed she would be a natural in it because she has incredible balance and form, or at least that's what her instructors tell her because they receive monthly checks from her parents who struck it rich in the lucrative textiles industry. Luckily I am able to think on my feet and keep my concentration razor-sharp, thereby allowing me to bypass their twisted little dog and pony mind games. I've got enough crap in my life to worry about, so unless I find myself surrounded by voracious smoke detectors who have somehow escaped the pool area and are lusting for my blood as compensation for their fallen brethren I previously drained and murdered with my wireless mouse, I'll disregard this.

"Leave a radio playing very softly while you are gone." This is simply ridiculous. First of all, my neighbors have been leaving their stereo system playing very, very, very softly nonstop for the past nine months or so. In fact, they have been playing it so very softly that you people on the east coast could probably hear it if you stuck your head out the window and listened for thumping bass beats belted from "The Best of Gangsta Rap: Volume 28." I'm convinced they inhabit a two bedroom apartment with one room solely dedicated to housing a subwoofer the size of a pregnant SUV. Despite the fact that they routinely provide enough "softly playing music" for at least half of this hemisphere, that still didn't prevent The Great Pool Area Knockout Massacre from taking place. Honestly, what kind of dunce criminal would decide to not burglarize some place just because the radio is on and playing some light jazz?

Perhaps the soft music would deter criminals if it's playing something along the lines of Kenny G. or John Tesh, two artists who have the uncanny, superhuman ability to render entire cities unconscious by making everybody think they're trapped in a very large elevator with a speaker that refuses to die under any circumstances. If I suspected Mr. Tesh lived in the area, I would be on the lookout for him dragging bodies and disposing of them in the sacred pool area, wherever that may be.