An Open Letter to My Upstairs Neighbor

Tuesday, Feb 26, 2013 by Jon "@fart" Hendren (@fart)
Hey dickhead, it's the guy from the unit below you. I'm moving out, but before I go I wanted to share with you some thoughts about your living habits, your love life, and some ideas for the future that could have the potential to make you a less-than-deplorable human being for the next person to inhabit downstairs unit 2. I hear everything that goes on. You might not realize that I hear it all, but I do, and every time you walk past my window going to your car you look at me with guilty eyes, perhaps caused by your own internal fear of being so intimately known, or as a reaction to the mean mug given to the asshole keeping me up at night. Let's start from the top, cowboy.
Your unit is the exact same size as mine. It's not big, it's pretty much a personal pizza but as a room. There's space for a bed, a small desk or a couch, and that's about it, so where the FUCK are you walking to all night long? And why the hell are you wearing boots? 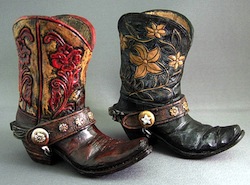 Also, buy a nightstand. Please, please buy a nightstand. You rest your iPhone on the hard floor at night and every single one of its vibrations sounds exactly like the phone charging 6 feet away on my desk because your furniture-non-havin' phone is vibrating madly on wood 6 feet above my head. (I once tried to retaliate by taping my iPhone to the ceiling and sending myself emails to make it buzz, but I don't think it worked as well as I wanted because I didn't hear a fat idiot screaming into his floor.)
Once you get a text, just hold on to the phone. Put it on your chest or leave it in your hand or something, don't put it back down. Whoever you text on the reg at 1:30 AM isn't going to stop at just one or two. Do you really put the phone back down on the floor and pick it up again every 30 seconds? What's the matter with you?
Since you use your floorphone as an alarm clock, it sounds exactly like mine and I get a full-room alarm going off every morning at 7 that I'm unable to turn off. This is some fucked up Guantanamo PsyOps shit you're pulling, but at least I know that without fail you hit the snooze about twice, put your boots back on, shuffle around, and jump in the tub for a bath-- seriously, a grown-ass man's bath-- every morning.
Speaking of your bath, I haven't the faintest concept of why you scoot your ass around in the bathtub. I hear it a lot, the rubbing sounds of lots of flesh on porcelain, back and forth and back and forth. You're scooting your nude ass around in a wet tub, there's no other explanation. Why would anyone do that? Are you cleaning your ass this way? Messed up.
I can usually tell when your girlfriend's coming over when you start rummaging around in the closet a lot. I'm not quite sure if you're hiding stuff or trying on every single shirt you own or what, but the closet is the key. Your girlfriend, by the way, is millions of miles ahead of you in the decency department. For one, she takes her shoes off. Maybe she's lived below someone with hardwood floors, who knows. Second, she seems to like you enough to phone in some boilerplate moaning once or twice a week, which brings me to one of my more important points:
You really suck at having sex. You're so bad at it. The sound coming through the ceiling is so detailed that I can hear every lethargic thrust, every dutiful rearrangement of bodies, and every time you straight-up gurgle near the end. Yeah man, it sounds like a gurgle. Mad gross. I have no idea how you live with yourself. It sounds like when a baby vomits but they're not old enough to make the puking sound so it's just sort of some bad breath and some fluid. You do that, coming out of your face, and it's awful.
I also have no idea what you eat, but it comes through my furnace duct somehow and it smells like someone peed on a burning corn husk.
These aren't the only reasons I'm moving, pal, but they'd be enough to justify it on their own. My new place has a lousy Nirvana cover band that practices next door, no kidding, and I'm happy to go take my chances. Smell me later.
Sincerely,
The Downstairs Guy That Blasted Kenny Loggins Tonight For Seven Hours