FUTURETALK: The Bard & The Genius

[The curtain opens. There are two chairs and a table. There is a man sitting at one of the chairs. There are very futuristic things all around the stage, which are called "future furnishings." The Man is reading a newspaper and the headline on the newspaper says, visibly: LAST NEWSPAPER EVER, PRINTED TODAY. He turns the page, and the next reads: ALSO, FUTURE NOW ALLOWS US TO RESURRECT DEAD FAMOUS PEOPLE FROM A LONG TIME AGO.]

[The Man lowers the newspaper. He is revealed to be WILLIAM SHAKESPEARE, the famous word person, and he isn't dead anymore. He places the paper on the desk and begins pacing slowly across the stage. There is palpable excitement in the audience watching it. The playwright's ex-gf is there, and she is extremely regretful that she broke up with him and knocked over his new drums right after he bought them.]

[Shakespeare returns to his seat, awash in good thought as a doorbell rings.] 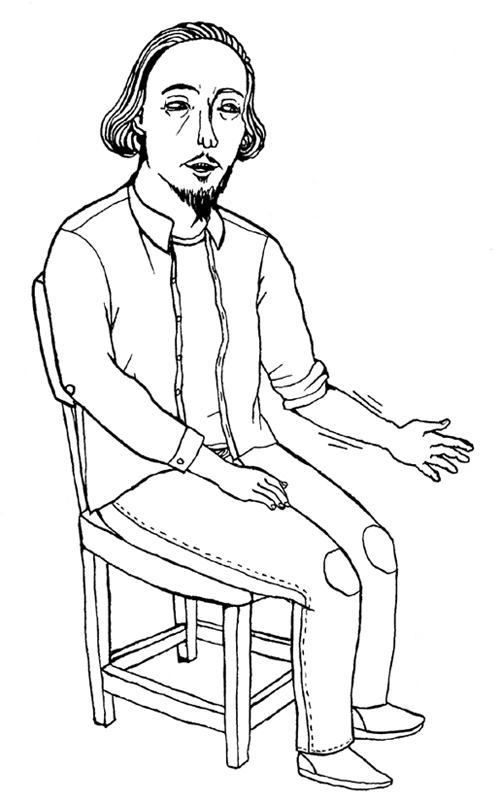 [Another person enters the stage. It is ALBERT EINSTEIN, the science man.]

[Einstein surveys the room scientifically. He bows to Shakespeare, and Shakespeare nods in deepest respect. Einstein sits beside Shakespeare. DJ TIESTO is the playwright's friend in real life.]

ALBERT EINSTEIN: It is good to finally meet you, my friend, here in the future. I have read through all of your plays a lot. I used some of them to help me invent science, electricity, physic, and all that other good stuff.

WILLIAM SHAKESPEARE: [laughing] My friend, you flatter me too much. I have caught up on some of your work myself, since arriving here, in the future. I have learned all the science, and also that God is not real, from reading online web pages that feature wise gamers.

ALBERT EINSTEIN: Oh, my science is nothing. We must discuss your plays. I have so many favorites: The Hamlet; Romeo Man; McDonalds; King Guys ... (kissing his fingers abrasively] The writing! The characters! The meter! Magnifique! How do you do such meter?

WILLIAM SHAKESPEARE: Meter is no problem at all. The secret to meter is to do this thing all the time: [he rolls up his sleeve and makes an awkward slight jerking motion with his left arm]. This is how I keep my meter. [amidst continued arrhythmic movements] That's how it's done.

WILLIAM SHAKESPEARE: That's how it's done. I could fancy a verse right now. [with rising pitches on each syllable] An ode to the season of ice! [in an exalted tone, while motioning strangely]

"Contumelies and dreams lay splintered:
Wear my cool shorts all through winter.
Walk along, the lakes lay frozen,
Wrestling isn't fake-- I'll show them,
All my moves, in shorts ever limber,
Doing wrestles all through winter.
Throughout these blizzards, I shall
not hide;
Break on through to the other side."

[Throughout all of this, Einstein clumsily imitates Shakespeare's stupid arm movements. The playwright is not gay or bisexual.]

ALBERT EINSTEIN: Incredible! I sense a great strength and power in you. [focusing on the awkward movements of his forearm] [in a dumb voice] I'm a champion. I'm a big huge champion.