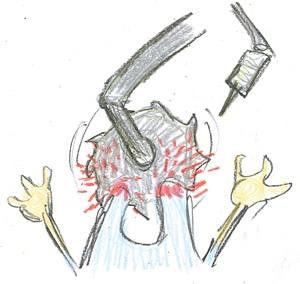 Using Monster.com, the Internet's premier search tool for bad jobs, I performed a search for the most horrible, dehumanizing factory job on Earth. My plan was simple: I'd work there for one week and keep a journal of my thoughts, documenting the job's effect on my mood and will to live. If I was lucky, I would survive the week, and possibly stir up some hilarious workplace antics a la The Office, proving that the mindset of factory labor alone doesn't promote suicide. If I wasn't, like so many Foxconn workers who discovered too late the disconnect between watching The Office and soldering together digital devices used to display The Office, I'd be dead.

Monster.com, per its penchant for disappointment, returned a job that only fit three of the four parameters I'd specified: While it was indeed a horrible, dehumanizing factory job, it wasn't on Earth. Rather, it was an entry-level position in a cyborg factory on the planet Stroggos, homeworld of Quake 2's cybernetic villains, the Strogg. Still, given the limited timetable I had to complete this article, I had no choice but to apply. After a brief application, interview, and stroggification process, I was hired.

Let me tell you about the Strogg. They're made mostly out of skin and wires and metal. They shoot grenades and bullets from every orifice of their bodies, including their ass, which is probably the first one you thought of. Science-fiction shows about biomechanical aliens (excepting the frankly sublime "Best of Both Worlds" Star Trek TNG episode) can't prepare you for how scary they really are in person. My manager, Sergeant Lieutenant Former Human Deathmarine Jim Welker, is a seven-foot-tall agglomeration of reclaimed limbs sewn together in no particular order, then ripped apart and sewn together in a slightly better order, so he can at least walk around and periodically punch me in the kidneys. He says that if I don't work faster, he's going to start ironically calling me "Greased Lightning."

The assembly line I work at is roughly the length of a football field, assuming you found a football field the length of the New Jersey Turnpike. My job is to line up a circuit board under a machine that stamps a chip on it. I know the board is lined up when a bell sounds and the machine comes down and I have to move my hands really fast or they'll get crushed. I have to stop writing this now because Jim is coming to punch me again. 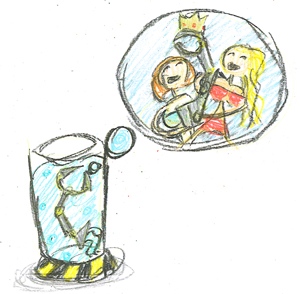 It's my second day on the job and I've already made several enemies, mostly the robot arms on the assembly line. They're all mad at me because my incompetence has reduced the number of breaks they get. Breaks are a pretty big deal around here: If you're a robot arm, you get lowered into a vat of hallucinogenic stroyent that lets your A.I. chip live out its wildest fantasies. If you're a regular worker like me, you can go to the Designated Leisure Activity Room (or as most of my coworkers call it, simply "The Room"), where you can toss around a football and talk about your relationship problems:

Bitterman: Has anyone ever thought about cheating on their girlfriend? (tosses football)

Me: (catches football) Let me put it this way: all the time!

Ranger: Do you even have a girlfriend?

Me: (tosses football) Does Jim smell like a slaughterhouse?

Ranger: No, seriously though, do you have a girlfriend?

The purpose of this journal is to document any changes in my mental state, but so far there's not a lot to report. Despite the overall oppressiveness of this job, I haven't had the urge to cut myself yet, or jump off a high ledge. The latter is probably helped by the fact there are no high ledges in the factory, except the one with the Quad Damage on it. But to get to that, you need to make some tricky leaps across floating platforms, and despite having the legs and spleen of a basketball player after the stroggification process, I'm definitely no Shaq. Another curious side effect of being stroggified: I'm not positive, but I think I have a vagina on my chest now.

Man, I'm getting sick of Jim. I'm apparently the only worker on the line who doesn't openly despise him, so he mostly hangs around me all day, telling dirty jokes involving sex processes that humans haven't invented yet. I think he understands that I don't get most of them, so he makes sure to elbow me at the parts where I'm supposed to laugh. He's broken a few ribs so far, and my vagina. I think this job might be getting to me, so as an outlet for my malaise, I've started writing poems. Here's my most recent one:

In a radical departure from the metaphor-laden verse of Whitman, Ginsberg and Reznor, all of the above lines are completely literal, with only the infectious rhythm and euphony to make their grim message palatable. I might attempt to publish some of these when I get back to Earth.