Lost Word of Jenny: Gamer Girls in the Making 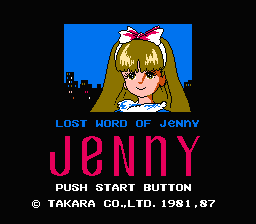 At a glance: Heather! HEATHER!! Ohmigawd I haven't seen you since, like, yesterday!! Did you go to the toy store like I did??? What did you get??? I wanna seeeeeeeeeee!! ...Oh... My Little Pony... No, no it's okay Heather. I totally don't hate you for getting something so incredibly lame. Well, not forever, anyway. But look what MY daddy got me to play on my brother's Nintendo! I bet you've never seen one of these before, it's called a "video game!" ...wait, you have your own Nintendo? Aren't there, like, rules against that or something?

I don't know who this guy is but I'm sure he just wants to be my friend just like everyone else! ..or like everyone else WILL anyway. Or should. Heather give me another Fruit Roll Up okay??Story: Okay so in this game you're a princess who's also, like, a fashion model, which is totally what I'm gonna be when I grow up. Oh don't be stupid Heather, I can too! Daddy says I'm SUPER smart so I'm gonna go to college and be WHATEVER. I. WANT, and I wanna be a Fashion Model Princess so THERE! Ugh stop ARGUING with me.

What do you mean,"why do random buildings take you to places like Outer Space and Ghost Castles when you walk into buildings?" DUH you can do it because Jenny is a PRINCESS in a magical princess town where everything is happy and nice and magical even though this weird guy in a trench coat comes and touches her and then there are people with guns and even the adorable little puppies want to kill you.

But I'm sure they're just trying to be nice and are really shy about it, like when Joey McSimmons calls me names in class. Oh yeah, hey Heather, what does "vapid" mean? 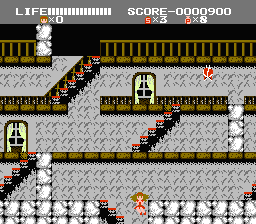 Well yeah... So you can't tell the difference between stairs and death pits. So what? Heather, noticing junk like that is the reason YOU've never touched a boy that isn't also a hamster.Gameplay: Okay so you, like, you run around in these magic places and you're trying to collect all of these magical things or whatever, I guess. I dunno it doesn't really maatter 'cuz Jenny is cute AND strong because she totally fights with like hair spray and her long, sensuous legs! (I learned that word from the back of one of my brother's VHS tapes. Because I'm smart and smart people read junk.) She kills bad guys SUPER fast so she's cool--

Well, uh.. of course they come back right away and knock her over even if she kills them a hundred million times--

Graphics: Anyway, isn't it so totally awesome how like, there are little guys on the TV and we can make them hop around with a little remote control and junk?? ...gawd Heather, I really don't care that you have a game about some stupid fish that "looks better." Seriously, all that's important is if Jenny looks SO CUTE and she totally does! Look, I don't talk shit about your stupid blue rat okay?

Sound: Gawd, Heather calm down stop crying! Okay I'm sorry I made fun of your rat-pig in pointy red shoes or whatever lameness you're into! No no please don't go home nobody else 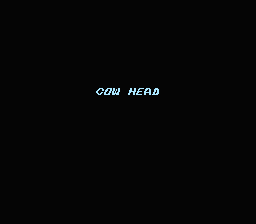 !!!! WHAT did you just call me???????will play with me you're the only friend I have even though you smell sort've like stale potato salad-- I mean, uhm, like coolness! Very unique coolness. Look, doesn't Jenny just put you in a good mood? All the music is so happy, it reminds me of like, licking a sugary sweet lollipop really really slowly! Maybe flicking it with your tongue a little bit. Even when you die it's just so cute!

What do you mean, you "wanna die" every time you talk to me? I don't get it. Heather, stop being so dumb.

Fun: So isn't this the BEST game???? Ugh, whaddya mean you want to play Mario AGAIN? But Jenny is SO much cuter than Mario! Who'd want to be a plumber, for Gawd's sake?? ...Jesus I bet you would, you dumb slut.

Defining moment: Okay fine, leave! See if I care! You'll be sorry though when I'm super popular because I'm going to get good at all of the video games and boys like video games and then they'll like me! And maybe just to help them into liking me even faster I'll totally show them my boobs because boys like that too and they'll totally respect and love me for the awesome super video machine wondergirl I am!!

Wh-- You're going to Joey's?? WHAT?? NO WAIT COME BACK HEATHER PLEASE.

...I wish there was some way to make, like, movies of myself playing video games with my boobs...