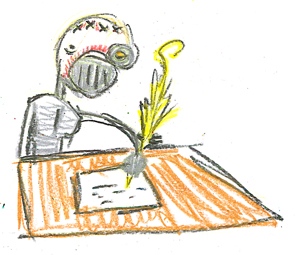 There's an old expression called "Art From Adversity," which in addition to being an example of alliteration (one of the many new techniques I'm learning as my poetry-writing skills achieve stupid levels of perfection) has become my daily maxim. Today during a power outage a group of mutant rats attacked my sector, culling many of the older, more infirm workers from the line. Bitterman? Happy trails, buddy. Ranger? See you in the break room in heaven. Sniper? I hope you promised your soul to Jesus in those last choked gasps. Jim? I hope you're in a better place, or at least somewhere where you can hear me say fuck you and your mom. Oh, and I won dibs on most of the porn in your locker.

Per the "art" half of my new maxim, I'm continuing to seek artistic avenues to express my daily torment. In addition to poetry, I've also found that I excel at found art. Today, for example, my new manager Jorg got mad at a worker, ate his skin and threw him down an elevator conduit. I pointed at the falling corpse and shouted "Look! Nude Descending an Elevator Shaft!" My coworkers, lacking a stomach for the avant-garde, failed to appreciate my compelling piece, but the dead worker would be happy to know that in a split-second burst of inspiration I lifted his demise from meaningless brutality to high art. 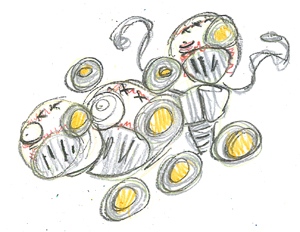 Tragedy stuck today. While I was writing a poem destined to become my generation's "Howl," the pressure gauge I was supposed to be monitoring exceeded nominal levels, causing an explosion that severed my left arm and lower torso. I was rushed to the infirmary, where, in the kind of accident that normally only happens on Sesame Street, I was mistakenly injected with hallucinogenic drugs. The next 17 hours were a nightmarish pendulum arc between unanaesthetized surgery and drug-addled vistas I can't begin to describe, unless I use something audacious like a metaphor: Basically, they looked like a persistent 3-D version of Pink Floyd's music, which might sound kind of cool, until I tell you I mean the Syd Barrett Pink Floyd when they were some sort of hippy-dippy jam band.

My journal ends here. After the surgery, I was not-surprisingly deemed unsuitable for work and terminated. Not literally, of course - although strangely enough, such morbid thoughts remained fresh in my mind. During the surgery, I'd felt overwhelming sensations of existential dread, crushing despair and (briefly) space-rock guitar solos. These feelings stayed with me after my return to earth. Even after I received a small accident settlement and COBRA benefits, they still remained. Had I felt, during my ordeal, the same torment that drove the Foxconn workers to suicide? Had I proven that depression is symptomatic of factory labor? Had I begun the first step in what will eventually be a global humanistic revolution in industry?

To be honest, I don't know. I'm mostly just happy that I survived this mess with my life and some of my vagina intact. I think the data I gathered, while revelatory at times, is too fragmented and inconclusive to draw any definite conclusions. On a personal level, though, I did learn several things from this experiment:

Conclusion: The Foxconn suicides are a multifaceted issue demanding nuanced, methodical ... blah blah blah. If I sound bitter at this point, it's not just because I'm forced to agree with The Wall Street Journal. I just opened my credit card bill, and apparently I owe $600 to various phone sex numbers. So I guess another thing I learned is that it doesn't take a soul-numbing factory job to make you feel depressed. Sometimes it can be something as simple as not having a girlfriend.

Thanks to Ian @ Fused Muse for spending his own 12-hour overnight shift on the crayon-drawing assembly line.