This is an emergency newsletter, but before I begin with the unpleasantness, I must tell you that our meeting held on July 17 was a huge success! While we haven't yet solidified the recruitment process and accompanying multiple-choice quiz and essay questions, we got the word out and had several hundred walk-in visitors who could have potentially asked us questions, or even joined the club!. Steven: Great idea to hold the meeting in the lobby of a hotel! Though next time, let's make arrangements with the hotel staff so we can stay longer than 25 minutes or so.

Steven and Greg quietly considering the merits of the anime on screen. Photo: Jeff

Now, onto business: A great terror has befallen our peaceful high school anime club. Our High Chancellor of Manga, Lieutenant of Giant Mech Suits, Female Android Specialist, Master Sergeant of Cosplay, and Designated Keeper of All Original Copies, Greg, has forcibly lost possession of approximately 85% of the club's anime holdings. Friends of Anime-- this is a call to arms!

Due to circumstances beyond our control, the modest Greg must currently reside with his mother and new bullshit stepdad, Jeff, for approximately the next 3 to 4 years. Greg's mother has no opinion of anime, but his stepfather does not approve. On the evening of July 20, whilst out amongst the local Hogwarts elite, Greg's room was invaded by a certain stepfather's bulldog, which found the stock of anime and destroyed a great deal of it. The humble collection of mainly VHS tapes was inside a wicker storage box and placed under Greg's bed, yet suspiciously, the bullshit stepdog was able to find and chew up many titles. My friends, this was no accident.

In light of this injustice, we, the administrative body of Friends of Anime, have felt it necessary to draft a proclamation which is to be presented without prior announcement at Greg's mom and Jeff's do-over wedding ceremony in September.

TODAY, September 4, 2007, I stand before you as a representative of the Friends of Anime to deliver this proclamation.

WHEREAS, Jeff has taught his bulldog, King, to actively seek out and destroy our anime; and

WHEREAS, Jeff has been a total buttlord to us basically every time we walked past the den, even on times we weren't making Gundam noises; and

WHEREAS, Friends of Anime is, by its very nature, made up of friends, meaning Jeff has obviously told a falsehood every time he told us we don't have any; and

WHEREAS, King is usually instructed to make potty in the garden directly under Greg's window, especially on the day of a club screening; and

WHEREAS, Jeff once removed the power cord from Greg's computer as he finished an approximately 800-word message board post analyzing (admittedly roughly) the personality of Haruhi Suzumiya and whether they would get along in real life; and

WHEREAS, Jeff suggested that the power cord would be put to better use as a belt, as Greg's sweatpants had inevitably lost elasticity around the waist over the years; and 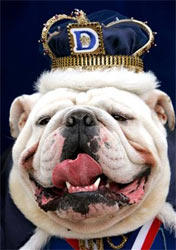 WHEREAS, Jeff once fed King the last can of Chef Boyardee, forcing Greg to subsist on a can of cream of celery soup until dinner; and

WHEREAS, Jeff made unsavory jokes while the canine ate, such as, "Boyardees some interesting comic books!" as he looked down upon Greg's mangas, which had been spread out in concentric circles on the kitchen table based on overall attractiveness of the lead female character; and

WHEREAS, it was inappropriate for Jeff to suggest Greg was "about to whip it out" as soon as Jeff left the room; and

WHEREAS, the NCAA Final Four is not more important than Adult Swim, and we even outvoted Jeff 2-1 but we still had to watch it; and

WHEREAS, psoriasis isn't Steven's fault; and

WHEREAS, it was unfair for Jeff to refuse to take us to the public pool because he believed Steven would "all infect-up the car seats;" and

WHEREAS, we felt it was humiliating when Jeff pretended to call Santa Claus on us for watching so-called "cartoons" at our age; and

WHEREAS, when Steven was thought by Jeff to say "Oh, Asuka!" in his sleep, he swears he was actually saying "Oh, arooga!" and dreaming that he was a very old car; and

WHEREAS, Jeff can't trick us into joining the army by saying they show animes during dinner; and

WHEREAS, our mustaches aren't anyone's business but our own; and

WHEREAS, while we understand it may be difficult for outsiders to remember all of the titles given to our club's members, calling Greg simply "The Fart Boss" is unacceptable; and

NOW, LET IT BE RESOLVED that Jeff is not right for Greg's mom, and that if they're still going to do-over their marriage ceremony, that myself and Steven-- Mage of Manga, Secretary of Sci-Fi, and King of Kawaii-- fundamentally disagree with this wedding and refuse to recognize it unless the anime is replaced and Jeff moves back to Fresno.

IN TESTIMONY THEREOF, I, Greg, have hereunto set my hand upon and distributed this commemorative fanart of Gregory fending off an anime attack by his stepfather on the fourth day of September in the year two thousand seven. (The girl is Brandi, on whom Greg has a crush.) 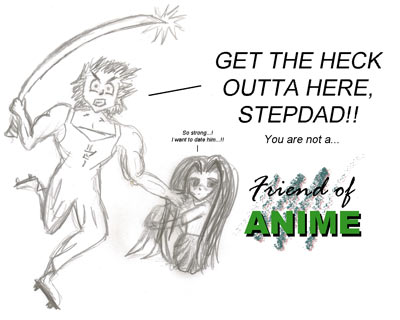