Crucifun: The Wide World of Crosses 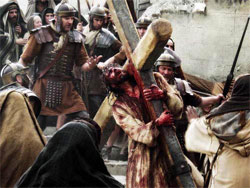 "Remember, Jesus, your safe word is 'marmalade'."By my estimation, our readers here at Something Awful are about 90% atheists, which might indicate that an article about crosses and their meaning is not really an appropriate topic. Lecture me about logic all you want, Dr. Spock, it's not going to change the fact that you were probably raised Christian.

These are the icons and symbols that have surrounded your life. They terrified you as a child, they symbolized your boredom as a teenager, and they have driven you back from the threshold ever since you received the crimson kiss of eternal life.

"But," you may ask, "what is there to be said about the cross? It's just two perpendicular lines, that is mega boring!"

Whoa, whoa, whoa there, King of Mathmagic Land, that's just one type of cross. There are all kinds of crosses in use by the many branches of the great tree of Christianity. If you think you can live without this information, fine, go on and bury your head in the evolutions, Ostrich Darwin. For those of you with a sense of intellectual curiosity, I bring you the Wide World of Crosses! 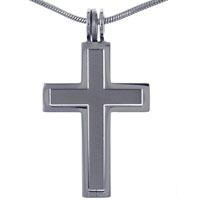 Probably the most popular form of the cross is the simple and unadorned cross, referred to here as "The Basic Cross." A silver or gold cross is frequently seen dangling in the cleavage of teenage girls and is effective at repelling vampires and speed-dating atheists. It is the cross of choice among Christians who want to demonstrate their Christianity, but don't want to over think it or get too showy. Be warned! Magically animated Pharaohs are immune to its effects and may attempt lethal frottage, as proven by the titular character in The Mummy. 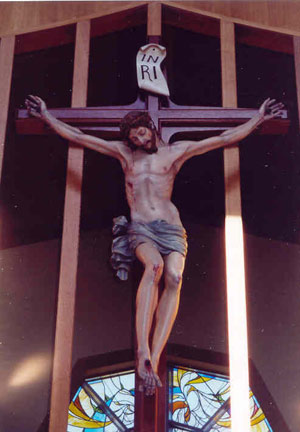 Gore-worshipping Catholics, apparently incapable of extrapolating the function of a device from its appearance, are in love with Jesus being graphically brutalized on their crosses. Even their version of The Basic Cross features a tiny silver or gold Jesus slowly bleeding out into the soil of Calvary as his emaciated frame bakes under the hot sun. If the stained glass, Latin, giant ceilings, robes, chanting, and burning incense weren't enough to convince you that Catholicism is serious as fuck, then maybe that giant statue of Jesus covered in blood will get the point across.

Still not there yet? Well, get ready, they're about to make you cannibalize his flesh and blood! The next time Christmas rolls around put on your Space Marine costume and head to the midnight mass, because Catholicism is just like you're living in Warhammer 40,000, only there are a few less flying skulls.