Stranglehold is the upcoming sequel to John Woo's 1992 action masterpiece Hard Boiled, with Chow Yun Fat reprising his role as a badass inspector that eschews the magnifying glass and notepad in favor of a gun in each hand and maybe a gun on each foot if he can get his big toes inside the trigger guards. Sounds like the movie we've all been hoping for after Woo's lackluster Hollywood outings, right? Well, no. It's a video game. I downloaded the newly-released demo from Xbox Live and stepped into the shoes of Inspector "Tequila" Yuen to see how the game is shaping up.

Four men walk through a door in a vaguely menacing manner. This has nothing to do with - 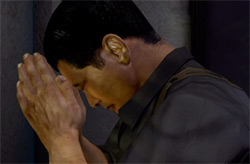 In the chief's office, I light a ceremonial candle and pray for a fellow cop who has been kidnapped, making a mental note to pick up more "Kidnapped Cop" prayer candles along with a few packs of "Someone In The Department Has Been Stealing Supplies" candles while I'm at it. Where do these things go?

As far as the kidnapping case goes, there's not much to work with. All we know is that the suspects are Asian. There's a lot of those guys in China. Hell, I'm one of them. This could get tricky.

A call comes in from one of the punks involved with the kidnapping, instructing us to send one police officer into the farmer's market - alone - to find a "golden rabbit". The chief hangs up the phone and threatens to send an entire SWAT team into the market, but I talk him into letting me go instead. I'm way better than the SWAT team. Those guys are all colorblind, and I can spot a golden rabbit from a foot away.

Entering an alley on the outskirts of the marketplace, I squint my eyes and chew on a matchstick as I wait for the trap that's about to spring. Matchsticks aren't the tastiest things in the world, but I'm trying to kick the nasty habit of walking around with a lollipop in my mouth, which in turn was a surrogate for my original habit of walking around with lollipops in my pockets. When one of those bastards melts, you get a grape-flavored bikini wax with every step you take.

A group of men emerge from the back doors of seedy apartment buildings and restaurants on either side of me. My experience as a hardened cop tells me that they're bad guys. It's all in their wolf-like expressions, the way they carry themselves, and the guns they're using to shoot at me. 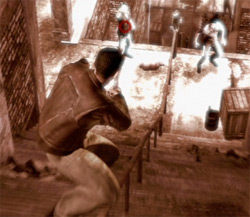 Instinct takes over. Before I know it, my trusty guns are out and time seems to slow down. The first thing they teach you in the academy is to shoot an object in the general vicinity of your enemy and hope it falls with enough force and precision to kill or incapacitate him. Thankfully, each one of the thugs I'm facing is standing directly below a heavy neon sign that hasn't been properly bolted in place. The fight's over before the first scumbag's lifeless body hits the ground.

I descend and ascend a few flights of stairs by running on inch-wide handrails (it's way easier to shoot while doing this than to simply walk on the stairs themselves), taking out a few more rounds of baddies with the help of gravity and conveniently placed neon signs. Thank goodness the businesses in this neighborhood blew their advertising budgets on the garbage-strewn back alleys behind their stores.

Finally I reach the market, a large alley bustling with activity and watermelons. Everywhere I look there are watermelons being bought, sold, and forced to brutalize each other in watermelon fighting pits. An elderly woman selling lemons is escorted from the market amidst a roar of boos. I can barely contain my excitement in the presence of so much watermelon.

Something catches my eye. A smug doofus in a chauffeur cap is leaning against a corkboard beneath a golden sign with a picture of a rabbit on it. Can that be the "golden rabbit" I'm looking for? It's a longshot, but I approach the man, pushing my way through the crowd and resisting the urge to shoot the sign.