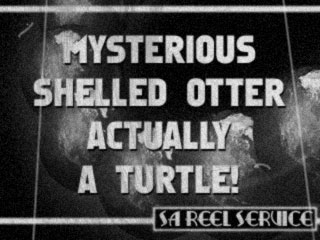 The darling discovery of the year was turned on its back by one plucky little boy born out of wedlock! Timmy McAlister, upon seeing Rocky, the famed shelled otter of Florida, quickly declared it a turtle.

"A turtle!" the illegitimate boy shouted before a packed crowd.

Surrounding visitors were left aghast, staring at a lie as bold and striking as anything the Devil could muster! Many women fainted and concerned parents covered their children's eyes with improvised rags and scarves to protect them from the hungry nightmare's ravenous maw!

The shelled otter lacked hair and bore an uncanny resemblance to the many other turtles kept at the Florida Gallery of Aquatic Afreets and Wonders. Could it be that it was just a turtle?

"We made a mistake," lamented a shamed biologist, who was ceremoniously laminated and filed in a warehouse as per biologist traditions.

After hearing of the outrage, a shocked Governor was quick to react. "This house of lies shall never again bear false witness! By my hand shall come a storm of bulldozers and wrecking balls!"

Through the timely government edict, the traitorous gallery was reduced to rubble and debris! The great mound of ruin, which included Timmy McAlister and all the falsities of science, was quickly gulped up by an angry sea! 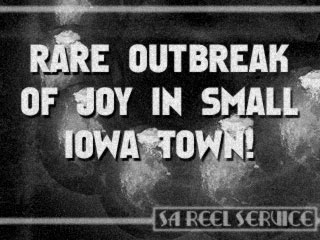 "We're happy to be happy" say delighted residents of Marshalltown, Iowa, stricken with a strange and unexplainable form of happiness.

The world is gasping in horror, unable to put rhyme or reason to the mysterious joy infecting these simple American people! "They shouldn't be happy! They absolutely shouldn't be happy at all!" yelled one frantic mother of three from Wisconsin after hearing the news from the town crier, who collapsed and died upon delivering it.

Neighboring communities are nervous, fearful that the mirth might spread. One nearby farmer crooned, "I have been farming this land for 47 years. I don't need happiness, just rain."

"We've never seen anything like it!" cries this head-scratching scientist, at a loss as to what is going on or why!

But town spinster C. Eva Koop is just tickled pink to be happy. "Ever since our mayor returned safely from the ancient caves we have been as happy as ever." 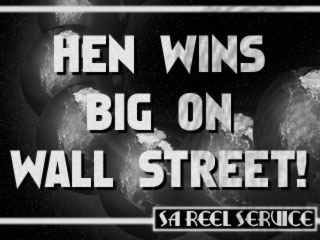 Wall Street has found the next big thing: Henrietta the Hen! This spry little chicken has been the belle of the stock market ball, picking winning stocks day after day and making rich men richer and poor men rich!

What's her secret, Farmer Dan? "This old gal lays an egg on the stock pages, always on a winner! You see?"

Wall Street brokers, big wigs, and would-be penny barons have been lining up outside Farmer Dan's property for days, offering anything for a chance to cash in on Henrietta's strange and unnatural gift. One greedy night bandit tried to abscond with the feathery dynamo, only to be shot in the hind quarters by an angry Farmer Dan.

Billionaire Hugo Reeves even arrived by autogyro to offer Farmer Dan a million dollars for Henrietta. Farmer Dan's reply? "Sorry, but I like eggs for breakfast!" Looks like Henrietta's future is sunny side up!