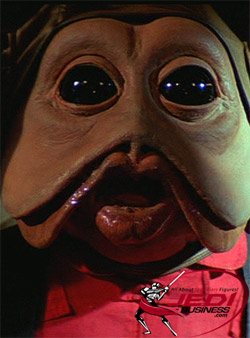 J.J., let me tell you something, hot stuff, you have opportunity now to reinvent 1980s acceptable racism for new generation of moviegoers. Remember when that was okay? Long Duc Dong have no time for love Doctor Jones. Monkeyman Nien Nunb is at your service ready to flap gibberish at heroes.

I have two thing go for me: recognizable and no dignity. I literally do anything for part. You want sex? I give it up easy. You want odd jobs? My friend, Nien Nunb is the oddest. I wax your dog. I put glitter on your walls. I clean out your lazy susan.

Or should I say RAZY susan! You like that? See what I did?

You notice maybe I no speak English in Return of Jedi? This perfect opportunity to make franchise yours by giving large dialogues to me. I am recognizable but no character! Here idea: I speak fluent English after learn from droid and go on many adventures with Rando Carlissian. I main character. China rising. Big box office success in world marketplace. Nothing Chinese people love more than to see cartoonish racism of themself from America.

Another idea: Hear of computer graphics? Render my foldy, gross wet mouth head in 3D popping from screen. Rig up big top Andy Serkis for Nien Nunb locomotions, maybe I have signature dance I do in cantina. Take off shirt. Take off bottom. I do it for you J.J. You like to see me no top no bottom? Nien Nunb will go all the way for you, hero.

Third idea: Benedict Cumberbatch or Danny McBride. Take pick. You want serious Nien Nunb or you want drunk jerk who does not give crap? I act and they do lines. Maybe I am inscrutable, good at math and love computer. Hilarious joke for you, J.J. Whatever you need. You want me to live in a hut and wear kimono, whatever, make no sense, but I am game.

Maybe we go Mexican route. I am Nien Nunb in pancho with space sombrero. Works both ways. Give me mustache I say "Ariba!" I be first pan-racist character offending all race.

Let me set scene for you, J.J. Alternate dimension Han Solo walk into bar where a frog lady is singing. Lots of puppets and lens flares all over. Han Solo has to find Luke Skywalker but he no have idea where he is in this time line. He see me and remember me from his reality.

Ohhhh Han Solo twenty credits I put anything in my gross mouth. No, it's okay Nien Nunb, just need help. Where is Luke Skywalker? Ohhhhh I don't know, but if you got a ship I show you.

Then rest of movie is me with Han Solo and I show him where to go and have adventures. And Chewbacca is dead from dog disease parvo so he need me full time.

I cook and clean and keep that sailor warm at night. You like Lars von Trier? Dogme 95 style I will show full penetration. Whatever you have in mind. You want me to hop around and use abacus. Cook up burrito for hero? Dance in background. Get blasted by anything, anywhere. I do it.

Think about it J.J. Not a lot of work out there for me. Need some help here. I got car repair bills to pay and children need to feed chop suey.