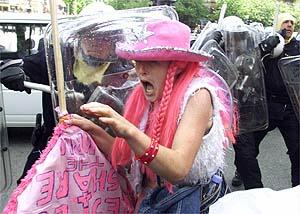 Hello, I find your site to usually be more interesting than certain prime numbers on my graphing calculator. However, I was wondering why you link to guestbooks? Usually your readers go there and put image after image of some poor man exposing the insides of his rectum along with witty commentary such as "UR SITE SUX U FAG!!! SOEMTHING AWEFUL RULZ!!!". If they are feeling particularly clever, they also include a broken image tag, which they copy and paste a few million times. I don't think you should link to guestbooks anymore.

I'd like to take this moment to make my feelings regarding guestbooks clear:

2. The only reason I link to guestbooks is because the author chose to create a guestbook for their site, make it public, and usually placed a link that says "please sign my guestbook, I have nothing else to live for in my shallow, pathetic life!" I'm simply relaying the information. If the webpage author didn't want people to sign their guestbook, they would not have made a guestbook.

3. If I don't link to their guestbook, I get flooded with emails say "HEY LOWTAX, THAT GUY WITH THE WEBPAGE ABOUT CARTOON ANIMAL GAY SEX HAS A GUESTBOOK!"

4. The people who sign guestbooks are clearly in the minority of SA viewers. We usually send about 2,000 to 3,000 hits a day to the ALoD. Of these hits, there are about 50-200 guestbook entries. Of these entries, about 70% are just some moron retard copying and pasting the same stupid message over and over. That means there's around 40 hopeless idiots from this site. Since we get over 50,000 unique IPs a day, that means the offending idiots make up less than .08% of SA's audience. That's a pretty good ratio.

Make no mistake; I think the people who fill guestbooks with spam, offensive pictures, and other brainless trash are the biggest morons on the planet. They're uncreative, untalented mountains of flesh. However, these are the same people who go out of their way to do this lame crap. If I didn't link to their guestbook... guess what? They'd find it and flood it anyway. It's like if somebody really, really wanted to murder you (but guns are illegal and can't be obtained), they'd end up stabbing you to death or running you over with their car or stabbing you with their car. These people don't have anything better to do with their lives than post shit in a guestbook, so they're going to do it regardless if I post the link or not.

So what I'm trying to say is if I post a link to a guestbook and you feel that you're committed to signing it, at least do something amusing. Be creative. Be witty. Just don't be a brainless prick and flood it with stupid shit.