Your Guide to Holiday Binge Eating 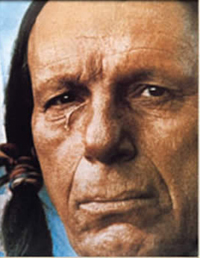 My so-called ancestry.Ever since that Indian on TV cried a tear that eventually became the raging Colorado River, Americans have regarded Thanksgiving as a holiday worth celebrating. Containing all of the selfishness of Christmas but without a trace of the imposed morality, on Thanksgiving you can stuff your face and at the same time not be nice to your racist grandpa who refuses to watch a channel that lets a "colored lady read the news." On Christmas, things would be different; but today, feel free to take away his whiskey and tell him to stop wiping his greasy, gnarled turkey fingers on the recliner. Brave men fought and died for you to have this right. And your grandpappy might be one of them!

But for now, forget about your family. They are just obstacles in your way to obtaining plate after plate of baked meats and starches. This food would have carried no implications on any other day, but on Thanksgiving, just by joining a meal you have tacitly entered an eating contest. Do you want to join the ranks of so many losers who have lost this game and suffered the purgatorial fate of being stranded on a couch, bloated with food and forced to watch one of Charlie Brown's depressing holiday adventures? Or do you want to be the winner who gets a free trip to the hospital and a chance to tell everyone at work what a stomach pump feels like?

I am here to help you. 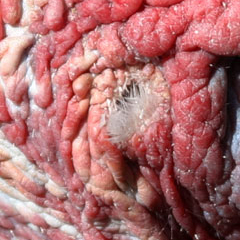 This is a picture of a turkey's ear. Happy Thanksgiving!Welcome to the turkey, otherwise known as nature's baseball player. The average turkey is pumped full of experimental drugs until its limbs and body weight grow to freakish proportions--all for a short performance on your dinner plate. Why, to a turkey, Thanksgiving is just like a World Series game for Mark McGwire! If you've never seen a turkey, check your work e-mail right now. I bet Debbie in accounting sent you that oh-so-famous picture of what looks like a turkey sucking our President's dick. Turkeys!

Unfortunately for you, in the game of Thanksgiving, turkeys are the bishops -- which I assume are just as useless due to how ridiculous they look. When you're loading up your plate, take one piece of turkey at max; and if you can, take it only for show. Find a nearby dog's mouth to sneak your turkey into, but don't go overboard. Your family may be suspicious if Scruffy starts farting or is dead.

Those who think Thanksgiving is about the turkey are often found asleep on the couch or rolled out into a snowy driveway after plate one. The turkey, though it may be the centerpiece of a Thanksgiving meal, is a trap engineered by your pink, doughy elders who know all of the rules of the consumption game. While you anxiously bite down on a thick piece of juicy, white meat, these wise men know that the powerful barbiturates coursing through the blood of turkeys will leave you unconscious and them the winners. Go ahead and search the abandoned corners and crevices of your house right now. If you find hidden piles of dried, rotting turkey, you'll know why you've been such a sucker for all of these years. 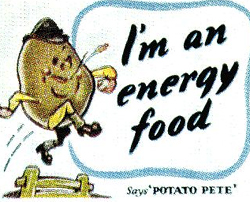 Potato Pete, seen here running from the FDA.As delicious as they may seem, mashed potatoes serve a rather utilitarian purpose during Thanksgiving dinner. Any competitive eater knows that to avoid bowel rupture and the inconvenient trip to the hospital/lifetime with a colostomy bag which follows, it's important to establish a thick foundation at the base of your stomach. Mashed potatoes do just that, because this is how the human digestive system works. But make sure you know that establishing this foundation isn't the only purpose of mashed potatoes; a great quantity of this side dish must be consumed between each helping in order to tamp down the layers of food accumulating inside of your body. If done properly, your insides will look like the casseroles of madmen! And just remember: the malleable nature of potatoes will let you pack every square inch of your body with food, all the way up to the top of your esophagus! You'll find that most Thanksgiving meals are best finished off with a plate of mashed potatoes and a trowel. Yum!