Turning Twenty-Two and the Quarterlife Crisis

I am turning twenty-two on the twentieth. How horrible. I think this is the last milestone in my life for a while, let me check the chart. 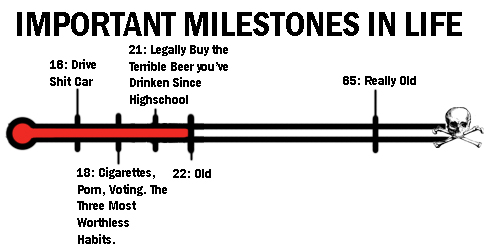 I'm about to start a journey (completely against my will) where the next stop is in forty-five years, twice my current age. Needless to say, I'm fucked. I can't walk down a block without stumbling. When I turned twenty-one, the day was filled with festive drinking, but like the swinging pendulum of time, my twenty-second will be nothing but a week long binge of miserable drunken mourning. Apparently, I'm an adult. But what's that mean?

So here I sit, trying to answer that question, having a quarterlife crisis. Unlike the midlife crisis, where the victim looks back at half of his or her life with disappointment and regret, I'm able to look ahead and see all the disappointment and regret of my future decisions. At twenty-two, I am between two opposite poles of life, but I have no idea where I am on the scale. Most people are able to flow comfortably through time, constantly adapting and changing their perspectives. Hell, there are twelve-year-olds on the stock market and forty-year-old Pokémasters, but because of a recent discovery, I am stuck, no, constipated with my life. The past has become lodged in my head, and I need to take a Pepto-Bismol and reevaluate my current situation.

As an ambitious child, I used to write down goals on pieces of scrap paper and save them inside a Halloween bucket. The goals were as simple as the handwriting, but they all seemed possible. I came across the collection earlier this year while moving. Those who forget the past are forced to repeat it, but when it comes to goals, forgetting can be comforting. Now I'm forced to remember what I wanted to be, instead of adopting new goals.

I'm forced to adapt my childish dreams of the future to the dreamless present world. I categorized the goals between impossible and possible. Any dream labeled impossible had to have a good reason, and any feasible dream had to be started before it's too late. The next time I look at this list I'll be fifty, and no Miata can replace a lost childhood.

Be an Astronaut: Bad vision, too tall, hate the cold. There are a million reasons why I'm not allowed to be an astronaut, but only reason why I don't want to be one. I met John Glenn in the sixth grade, what a boring mother fucker. I wonder if John Glenn has ever been called a mother fucker? Maybe some Russians wearing spacesuits in Saint Petersburg during the 1950's space race. 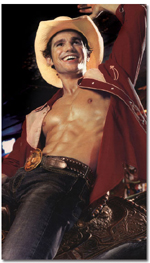 Be a Firefighter: This decision came out of my childhood's hero obsession. I thought saving people from disasters was the greatest accomplishment in life, and I was right. But I never considered how unbelievably frightening fire is. I also am indifferent to California burning away.

Be a Cowboy: A psychologist would label this a homoerotic dream

Be an Actor/Musician: Considering I only watched Ernest movies and listened to Weird Al Yankovic cassette tapes, I'm surprised I ever aspired to do anything creative.

Be a Marine Biologist: Fuck dolphins.

Be an Egyptologist: Fuck mummies.

Solve World Hunger: This signifies my first global realization. Unfortunately, I can hardly solve my own hunger, so unless Broccoli Cheddar and Four Cheese Hotpockets count, I got nothing.

Make a Million Dollars: Okay, lets check this out.