Hello, "boys" and "ghouls!" Welcome to Spooky Steve's Halloween Sound Effects Album Reviews: the Internet's definitive source on Halloween sound effects albums since 1996! Spooky Steve has been on hiatus for a few months due to his unsuccessful attempts to win a workers' compensation lawsuit, but now he's back and ready to return to his "scarify-ing" (terrifying) hobby since Sears unexpectedly reduced his hours to part-time! 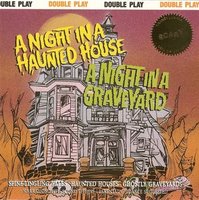 When you get Jim "No Bones" McCullough--the Phil Spector of Halloween SFX albums--on a project you know you're in for a treat. And A Night in a Haunted House is just that: a treat. It's got the creaky floorboards, squeaky footsteps, and otherworldly moaning that makes any McCullough album strictly lights-on territory for me! But A Night in a Graveyard? ...Not so much. Spooky Steve isn't sure if old "No Bones" passed this b-side down to his protégé, Scott "Bones" Anderson, but "Graveyard" needs to be sent back to the graveyard, if you catch my drift. This second track features a common problem of the genre: too many monsters! You clearly can't have zombies and werewolves in a same scene without a fight inevitably breaking out. Ignoring the racial tensions between monsters does not make them go away. Truly amateur stuff here. Spooky Steve is disgusted, and not in a good way! 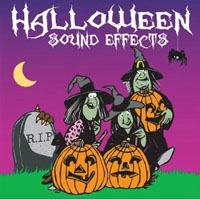 With such a bland name and cartoony cover, Spooky Steve thought twice about investing the 99 cents Walgreen's was asking for Halloween Sound Effects. After all, Spooky Steve loves Mallomars, and could get a pack of Mallomars for the exact same price! [Note to fans: Do not send Spooky Steve Mallomars. They will not make it through the postal system intact, no matter what you write on the envelope.] But Spooky Steve decided to bite the bullet, and was pleasantly surprised. Despite being a little witch-heavy (because witches can be reasoned with, they are not scary), Halloween Sound Effects is surprisingly good, and perhaps a recommended buy for the younger fans at your listening parties. Spooky Steve also has to give Halloween Sound Effects credit for not using the same, tired "haunting wind" sound from the public domain libraries that we've all been bored with since the late 70s. Not the scariest of albums, but innovative. Spooky Steve suggests running down to your local Walgreen's before this little treasure disappears for good! Spooky Steve bought the last 32 copies they had, just to be safe.