Here is Where Someone You Don't Know Died in His Civic 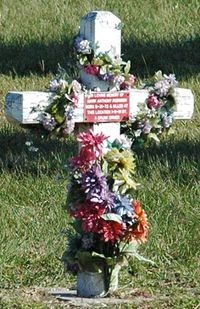 Remembering the dead is a major part of our culture. Gravestones mark where we can find them, and obituaries describe them in 500 words or less. These rituals honor the dead while comforting the living. Placing a little cross on the side of the highway, however, does neither.

I just returned from a trip that required driving straight south for thirteen hours. I half expected Virgil to appear in my passenger seat and guide me through the ever-worsening environment, but it wasn't so bad. As I drove deeper and deeper south, I noticed a growing number of ornaments stuck near the side of the road.

They were roadside deathcrosses, and they litter the highways, state routes, and cul-de-sacs of the world, marking where some sucker was destroyed, and I, not knowing the person or the circumstance, couldn't care less. If a tombstone in a cemetery is like a book in the library, then the roadside deathcross is the blog of remembrance-they are everywhere, they are unavoidable, and they are left by forgettable, stupid people in forgettable, stupid places.

A tombstone marks where someone is buried, the deathcross, on the other hand points out where the action went down. It's like a plaque at a civil war battlefield, except instead of showing where thousands of soldiers met their demise, the deathcross can do little more than remind the few citizens of whatever hillbilly town where Ol' Peterson ran into the guardrail at 95mph after he drank that handle of whisky.

In all seriousness, why does the location of where someone wrecked and died matter? Should a cross be set outside the low-income housing center whenever some diabetic old lady dies on her couch? Are ambulances filled with wilted bouquets? Are road deaths somehow more honorable? Are they honorable at all? Lets check the official list of causes of road casualties:

Slim picking. I mean, the best you can hope for is "struck by drunk driver," because at least someone will end up in jail. Maybe heart attack might give you some fame if your dying breath is spent steering into a bus of children, that way you could give the class of fieldtripping fifth graders the elusive "freak accident" as their bus careens off the road. But, chances are your death will be just as uneventful as your life. Despite the fact that 99% of deaths occur from fucking with the radio or something equally pathetic, people still insist on putting those white deathcrosses out there by an exit sign or a bridge support.