I know what you're thinking -- "Why are you writing a letter on paper, like some crusty old George Washington faggot?" It's because when I tried to Tweet, I'd type something like "I JUST SAW A FUCKIN DRAGON," and the message would turn out like "Brandon has gained 2 EXP" or "By Jove, Brandon has suffered poison!" It's like this whole island uses some fucked-up wi-fi translation service that makes all their technology retarded.

Anyway, bro, I figure you spent spring break doing the usual shit: getting wasted, throwing it in some skanks, smoking some weed. Pretty fucking sweet. I'll never know why I thought I had to mess with success. This year, the Brandog was all "I wanna do something different!" I heard this nerd in the computer lab talking about this tropical island with all these volcanoes. It sounded cool as shit. He didn't look like he'd know about anything worth my time, but then I thought, I never see fat dudes like this on the beach, maybe he knows some places I don't. Cancun gets so fucking crowded that I end up brushing against dong whenever I try to move. And if everyone who goes to this place is a lard-ass like him, I'll have easy access to the native babes!

So I had a bro-down with the geek, got the info hook-up, then I fucked around on the Internet for a long time until somebody fucking showed up in my room and said they'd get me to the place I asked about. It was some old hag and she started blabbing about "Are you prepared to face the minions of death?" so I said "I'm a big boy, just give me the damn ticket." Then she laughed and there was smoke, and I was here, without a plane or anything. That's how I remember it, man, but I was pretty fucked up so I might have forgot.

However I got to this goddamn place, let me tell you, it's a fucking joke. This is worse than when I spent my whole Spring Break building houses for bums or whatever because I was trying to plow that hippie chick.

At first I was pretty stoked because all these people came up and asked me if they could join my party, and I was like "Hell yeah!," even though most of them were dudes who were dressed up all fruity. I just thought, 'maybe it's like Mardi Gras all the fucking time here!' But all these assholes wanted to do was walk behind me in a single-file line, no matter where I went or what I did. I went to a bar, and they were all like "would you like for me to wait for you here?" and I said "whatever." That was days ago, and they're all still fucking sitting there!

So, the people are freaks, but the island looks pretty awesome, so I thought, I'll take the cooler and chill out for a while. There weren't a lot of people on the beach, which was nice at first, but then I found out that's because the water is filled with GODDAMN DRAGONS AND SNAKES AND SWIMMING HORSES. What the fuck, man? 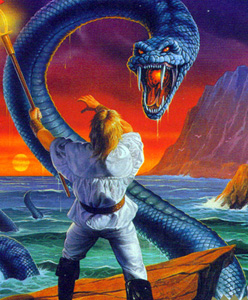 Look, it gets cold here at night, and this is the only kind of clothes they sell. So quit giggling like a little bitch and check out the fact that I'm FIGHTING A FUCKING SERPENT.

I gave up on that shit and went hiking near the volcanoes, where I found this skull. Strange thing, man, it was like I heard this Muppet voice saying "friend?" and I looked in this pile of rocks and here it was. I picked it up, because at least I'd have a bad-ass souvenir to bring home. They have gift shops, but they mostly sell weird shit like battle axes and leather shields, and they're always trying to talk you into upgrading, total tourist scam.

I made it down the mountain with the skull, when I got surrounded by a bunch of crazy fuckers. One of them wore an ugly cyclops mask, and one looked like he had two heads, and another was dressed up like he didn't have a face. They all started moving toward me really slowly and groaning like they were hung the fuck over. I think they were like the local gang or something. I didn't have any cash with me, so I held up the skull to see if they would take it and leave me the fuck alone, and suddenly the eyes started glowing red and they all passed out or fell over dead or something. It sounded like they dropped a lot of coins, but I didn't stick around to check.

I wish I would've picked up that change or stolen their fucking wallets, because when I started asking people how to get off this floating shit loaf, they told me some cock-and-balls story about how I didn't have enough "virshu" (that's what these homos use instead of dollars) to complete my quest. The only transportation I've heard about is some airline called Moongate, and its flight schedule is just a bunch of STUPID FUCKING SYMBOLS. You won't believe what I do to make money, virshu, whatever -- I stab piles of slime with a sword. It's like putting toothpicks in Jell-O shots, except people give you coins and act like you're a big fucking hero.

Everything here is a complete rip-off, man. This dude asked me if I wanted some "herbs" and I was like "light it up, bro," but all he had was like moss and ash and SPIDERWEBS. I asked him if he had any of the good shit, and he said "Manroot cannot be found in shops. Legend says it's only found at night." I was like, "fuck you, fag."

It seems like everyone's testing me, man. Like, there was this blind dude behind the counter at this store, and he was all "count the money out for me please, I can't see,'" and I totally gypped his ass, because his shit was way too expensive anyway. And this fucking hobo was all "I have sleeping sickness... sknxxx...," but I didn't give him shit, because that sounds like a bullshit disease. But people started looking at me like I was a dick, like this whole thing is some fucking Truman Show and everyone on this island is watching me and judging me.

Anyway, I need some virshu fast, so I could use your help putting that skull up for sale on eBay. For my location, put "Isle of Fire," or whatever the return address says. I don't know, I asked around for a post office, and this GIANT FUCKING BIRD WITH A LION FACE swooped down and snatched this letter in its bird claws. If you're reading this, it must have gotten to you, so I guess the fucking lion bird is like the mailman. Whatever. 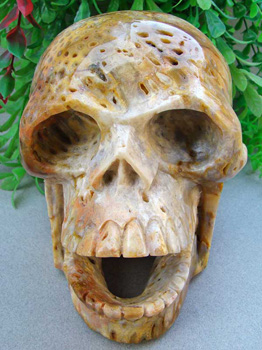 Description: L@@K! (Make sure to do it this way -- trust me, it makes people say 'this is gonna be fuckin' good.') This is a real skull from an exotic paradise! It changes colors and has glowing-eye effects! It even talks sometimes, if that does anything for you. (To be quite honest, it won't shut up about lame shit like wizards and the "gem of immortality." If I could find the batteries, I'd make it shut the fuck up, but I quit looking because the jaws snap shut if you reach into the mouth. Don't include any of this, bro, for your eyes only.) Get this one-of-a-kind artifacts from a land where nothing is what it seems! It will be your friend and protect you with magic!

OK, have a good laugh at the Brandog, you dick. Pass this letter around and you can all fucking laugh your asses off. But seriously, do me a favor and help me sell this skull. I love you, bro. See ya when I get back. 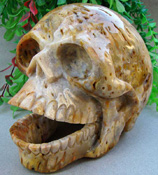