Welcome to Our Halloween Amusement Parks

This update is brought to you by "A Commonplace Book of the Weird" from SA writer Joseph "maxnmona" Fink. This just-released collection of short fiction is inspired by the story seeds contained in H.P. Lovecraft's infamous Commonplace Book. I have a short story in there and so do other people with actual talent. Some of the stories are funny, some are scary, and some are incredibly cool and weird. Please check it out and write a review for the New York Times and submit it to the New York Times and get published in the New York Times. Or your blog. Whichever is more convenient for you.

As Generation Manchild comes of age the traditions of our collective youth are transformed into new ways to spend money we don't have. It's the reason we have 75-dollar statues of video game characters and the reason, along with resurgent paganism, that Halloween is turning into the biggest holiday of the year. Halloween decorations are now a bigger business than Christmas decorations probably according to my best guess. Sure, a good inflatable Frosty and a couple million strings of icicle lights are fun, but do they spew smoke or have glowing eyes or start screaming about death? Only if you buy them from the one-eyed Mexican in the van. 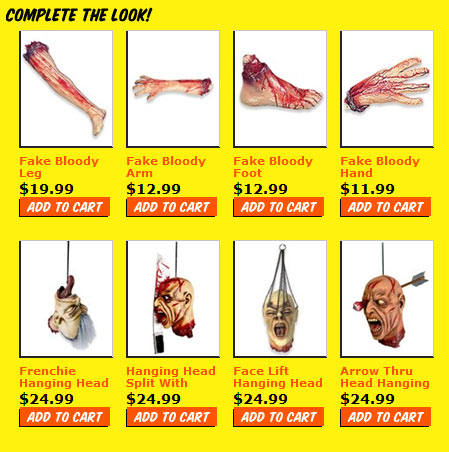 When I was a kid of trick-or-treating age (age seven to age twenty-five) there was a guy on my street who stacked some hay bales in his yard, played a tape of extra-creaky haunted house sounds, and sat in a folding chair disguised as a scarecrow. Whenever a kid came up to ring the doorbell he stood up and yelled and terrified the little kids. The slightly bigger kids acted tough, but we were pretty scared too.

Halloween is now all about recreating that one scary house everywhere. The Internet and those temporary Halloween stores are filled with a Showbiz Pizza's worth of robots and smoke machines and articulated, maggoty skulls for you to run up the tab on your credit cards. America is turning its wasteland of over-mortgaged houses full of toxic Chinese drywall and marble counter tops into amusement parks for a bunch of kids that don't appreciate anything. Add in the competitive nature of suburban decorating and you end up with an arms-race of ridiculous Halloween animatronics.

Last year we bought a headless woman. I'm not proud of it. Yeah, it was an after-Halloween floor model bought cheap and it doesn't work very well, but it's a life-size decapitated woman holding a severed head that talks, complete with moving mouth. Right now it's standing just inside the door of my house, right in front of a banister covered in cobwebs and spiders and Halloween lights that are suspiciously like orange Christmas lights. And no, you can't have sex with the headless woman, it's pretty much made out of telescoping pipes and a cheap costume dress. You'd have to...well, I'll get back to you on that, but I'm guessing the best case scenario will pinch the hell out of your ball bag.

I can hear the doubt creeping into your inner monologue: "Zack, just because you bought some lame dick-pincher of a decapitated lady robot doesn't mean all of America does it."

Maybe not. Maybe this is just some delusional fantasy. Maybe that time when I was a kid and I went under general anesthetic I never woke up and this is all a Jacob's Ladder of death as I search for the light within the recursive Halloween nightmare of my second bardo. Maybe no, buddy. You're wrong. They wouldn't be selling this stuff everywhere if other way-cool and ultra virile studs like me weren't doing it.