Commissioner Reagan: (on the phone in his office, being thoughtful, noble) No thanks are necessary. To cure the disease you needed exactly as much money as I had on my pay check. It is a police man's duty and instinct to always do the right thing.

(there's a hesitant, weak knock on the door, as if it was knocked by a sissy idiot) 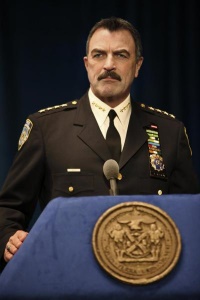 Commissioner Reagan: Are you referring to the justified shootings, beatings, and car compactor murders done as an absolute last resort? The heroic actions performed by the very officers who risk their lives to protect those who criticize them even as scary black hooligans corrupt our country and make us weak against muslim terror?

Simpering Liberal Assistant: Wow, you're right! There's a reporter who wishes to speak with you about all that. Should I let him in? I wish I had half the honor and nobility that you possess, sir!

Commissioner Reagan: (absently stroking a framed portrait of Breitbart.com with one hand while absently stroking his many commendations with the other hand) He'll just twist the facts, as all mainstream reporters do, but yes. I never back down from telling the truth. Send him in.

Evil Press Scumbag: (openly sneering) Hey, pig. I write whatever I want in order to sell papers, with no regard for the truth. I withhold information that could save lives. That's what I do. You got a quote for me about that video that went viral? The one where a cop shoved a coma patient into a pit of poison snakes?

Commissioner Reagan: (shaking head sadly) You know full well that everyone on the internet is overreacting. The beginning of that video was conveniently removed before it was posted online. That missing segment clearly shows the coma patient abruptly sitting up, waking from the coma in a threatening manner before going comatose again.

Evil Press Scumbag: That doesn't fit my senseless anti-police narrative so I'm not going to write it down. So tell me, are you going to speak at that event tonight? The one where the audience is young impressionable people who bought into the #BlackLivesMatterMoreThanAllOthers conspiracy created by myself and others like me?

Commissioner Reagan: Of course. Their concerns may be erroneous, but I will stand in the face of their irrational cruelty.

Evil Press Scumbag: (his jaw drops) You're an incredible man. Incredible. I'd never admit it to the world, but you clearly have the moral high ground.

Commissioner Reagan: (backstage) What has our fine country come to?

Simpering Liberal Assistant: Sir, you can't go out there! They'll yell real loud! They might not even hear you calmly explain how wrong they are!

Commissioner Reagan: I will bear this. For the good of all mankind, I will accept this burden. If there must be a target for their misplaced anger, let it be an impossibly strong man.

Commissioner Reagan: (stepping on to the stage) Good evening. I'm here to- (overwhelmed by loud yelling)

Commissioner Reagan: (tries to talk, but he's drowned out)

Crowd Member: (literally frothing at the mouth) Police shouldn't hurt people! They are public servants, we shouldn't deify them and be at their mercy!

Commissioner Reagan: (to himself) Forgive them, for they do not know what they are doing.

Needlessly Angry Crowd: (in unison) BLLLRRRGGGLLE! RRRRRRAAAARRR! We haven't even thought any of this through! We're just gullible and eager to victimize people who are better than us in every way!