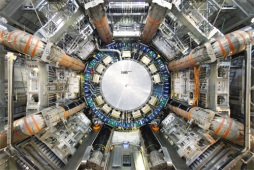 Somewhere, someone is making a life-sized replica for a computer case mod.Scientists at the Large Hadron Collider have officially declared "It's particle clobberin' time!" Of course, they didn't exactly use those words. Being an international assembly of brilliant minds, I can only assume that they shouted the phrase in Esperanto.

This week, the LHC set a world record by colliding two particle beams at 3.5 tera electrical volts each. What does this mean? Observations that have never been made before, shedding light on questions and concepts that the scientific community had previously only been able to theorize about.

The vast amounts of data yielded from a project of this scale can't be parsed overnight. Thankfully, three nights have passed so now we pretty much know everything.

Time travel is indeed possible. The method: Think about that Superman movie, the part where he flies around the world backwards until time rewinds. Boom. That reference is more than twenty years old. Welcome to the past, asshole.

String Theory was totally wrong. There's no such thing as string.

We all know that if you place tin foil in a microwave, it will erupt in a shower of sparks. If, however, you wrap a microwave in several layers of tin foil, it will be pretty much impossible to work the buttons.

There is an afterlife. It is rectangular. There's an olympic-sized swimming pool, and not much else. The only seating comes in the form of backless stools that are just a little too tall with footrests that are just out of reach. The music is every Billy Joel song that you found tolerable, but never admitted to enjoying.

The last digit of pi isn't actually a number, but one of those little infinity loop things.

In a battle of the wits, Batman would defeat Einstein. The advantage would go to Einstein in the early rounds, but Batman would outsmart him with a devastating punch to the throat.

The briefcase in Pulp Fiction? Full of orange juice. The awed expressions were reactions to the fact that it hadn't leaked.

Scientifically speaking, the best baked good is the funnel cake.

About the origin of the universe - the Big Bang theory was right, up to a point. The massive explosion of all known matter scared the bejeezus out of a dinosaur, causing him to drop a beaker full of DNA, which in turn created the first single-celled organisms. Life always finds a way.

Lee Harvey Oswald did it. By "it" I mean "picked the worst possible day to take a break, walk to the sixth floor of the book depository, and fire a rifle four times out the window with his eyes closed".

There has been a lot of debate about what constitutes art. Now we have conclusive proof. Art is any movie that has been seen by ten million people or more on the opening weekend. Nothing else is art.

Electricity isn't exactly what we thought it was. Turns out, it's a harmless mineral that goes by the name of Sammy. Everyone that died of electrocution? Hypochondria.

Since we first discovered them, black holes have fascinated us. What the heck are they? Why are they so loud? Can't someone go tell them to keep it down? What do they taste like? Do you think he was looking at me? Do you think he likes me? We switched bodies? And we're identical twins? What sort of hijinx will result from our unlikely situation?

Science says: Just as black isn't the opposite of white, but the absence of it, black holes are the absence of other holes such as the one that encompasses the observable universe.

Parallel universes do, in fact, exist. In them, parking is way harder.

There have been more than a few questions surrounding the lowly quark. After analyzing the data, the Large Hadron Collider has revealed that "quark" is kind of a funny name. Case closed.

It is absolutely possible to travel faster than the speed of light, just not at your weight. Do some pushups and we'll talk.

The disbelievers were right about global warming. It is just a theory, and it is way more fun to fantasize about people in ivory towers trying to control your life than it is to conserve.

Although we have long understood the importance of the human brain (since a Greek medicinal pioneer cut off his own head and observed that he couldn't move around in quite the same way), we really had no clue how it all worked or what it was capable of.

According to these LHC results, the brain is essentially a second appendix. It's capable of bursting at any time.

Ghosts are real, just not human ones.

When someone on one of those ghost hunting shows asks for a spirit to reveal itself and in return they hear tapping, it is a dead horse. A smart one, the kind that stamps its hoof when you give it a math problem. When the ghost hunter asks for something to move in front of their handheld scanning device and the thing lights up, it's because the spirit of an electric eel passes by. When you sleep, the a ghost tarantula vomits in your mouth.

Why do so many strange things happen in the Bermuda Triangle? Because it's actually a square. People keep misjudging its borders so just when they think they're safe - *poof* - they vanish.

Given the number of long-standing questions that have finally been answered by the Large Hadron Collider, it will take some time for the scientific community to take all of this in and re-evaluate their wasted lives. With any luck, they should be ready for more next year when the LHC plans to double the collision energy that was used this week. As I learned in high school, double the energy equals almost ten times the output.