Happy Birthday! There is No Reason to Live Anymore!

As I sit here before you today, on the historical monument of my 25th birthday, I must admit that my life has taken a sudden turn for the worse. Now I'm sure that many of you out there are highly skeptical of this, as my life must seem pretty goddamn miserable to begin with, but let me assure you that I have now lost all reason to live. Why? Simple: THEY CANCELED THE XFL!

WWF drops XFL - World Wrestling Federation Entertainment and NBC are discontinuing their professional football league, the XFL, after only a year of operation."The numbers actually didn't play out for us," said Vince McMahon, WWFE chairman, in a conference call Thursday. "Despite where our heart was ... we just couldn't make it work from a financial standpoint." 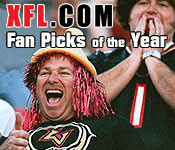 After I composed myself and choked back the tears, vomit, and tingly sensation in my groinal area, the reality of the situation finally slammed into me like a busload full of Chris Farly corpses. The XFL was no more. There would be no more pre-Los Angeles Extreme tailgating parties with the homeless guys on the corner of 4th Street. There would be no more chances to buy authentic fake XFL sports jerseys featuring names of players that sound like Italian food processing devices. There would be no more play-by-play commentary by announcers who gained their fame from repeatedly throwing fat, bald men into folding tables. The XFL is gone and it won't be coming back.

Instead of wallowing in my own personal hell and attempting to drown my sorrows in a pool of vodka and Sunny Delight, I began thinking about how we, as the (somewhat) human race, could salvage this (somewhat) professional league of Bed, Bath, and Beyond cashiers and parolees. Now that the league has been shitcanned, society will undoubtedly see a rise in the number of large, stinky, chubby guys whose vocabularies lack an acceptable number of adjectives. I couldn't think of a way to keep these semi-legit members of society off the streets and inside a fully-enclosed stadium, where they belong. Then it hit me: this week on Something Awful has been "Kind of Robot Week," celebrating the triumphs and downfalls of our custom-built battling 'bots. If I could combine the exciting and pointless entertainment of robot fighting with the not-so-exciting and pointless entertainment of XFL football, then perhaps I could kill two birds with one stone! Of course, the "two birds" that I'm referring to are "filling up empty space on the front of my website" and "finding an excuse to justify not going out and getting laid for yet another night." But yeah, I'm also quite concerned about the welfare of these valuable members of society and blah blah blah XFL players were a talented group of individuals who never once got caught masturbating on their webcams and blah blah blah.

So anyway, I came up with the grand idea of pitting the members of an XFL All-Star team against the members of the Something Awful Non-Sissy Robot Demolition Rally, creating what would undoubtedly be a competition that would both humiliate AND critically injure human beings while racking up incredible ratings! Once again, two birds with one goddamn stone, motherbitches! The good thing about the XFL was that somebody could have their leg torn off by an opposing defensive end and hardly anybody would even notice. This was because nobody attended or watched any of the games except Art Bell, and he was too busy communicating with the implant in the back of his neck to pay attention to the game. Just like the horribly nefarious Pod People, you could kill one and another will instantly take their place, probably sporting an even stupider last name. This works out quite well for our Non-Sissy Robot Demolition Derby league, as many of the 'bots have grown accustomed to the taste of human flesh, and will tear through titanium in order to satiate their unholy urge to destroy all lifeforms.

Using State Og's Horribly Dangerous Simulation Device, I was able to create and simulate one game of what I refer to as the SALOFAWLAR or the "Something Awful League of Failure and Wasted Lies. And Robots." SALOFAWLAR will be an exciting new league that will be promptly sweeping the nation, assuming Congress passes those "anti-manslaughter" bills I've been pushing for. It will combine the best of the XFL with the best of the Something Awful Non-Sissy Robot Demolition Derby, resulting in something that's both awful AND contains robots which make things dead. Let's take a brief look at the first SALOFAWLAR game, shall we? (HINT: yes, as you have absolutely no choice)

COMMENTATOR: "Well it's a lovely day here in the abandoned field behind the Von's grocery store in sunny Bakersfield, California. The Birmingham Bolts will square off against the Something Awful Skull Displacers today in the first game of the newly-formed SALOFAWLAR League. John Madden, what do we have to look forward to today?"
JOHN MADDEN: "We've got a classic matchup today with two of the strongest teams in the SALOFAWLAR, and I'm not just saying that because they're the only teams in the league. The Birmingham Bolts, who had the worst record in the XFL and were actually defeated by a Japanese Rowing team, are looking to reclaim their pride and dignity without the use of automatic weapons. However, the Something Awful Skull Displacers are coming off a perfect record of 2,392,182 - 0, which represents the numbers of civilians mowed down by artillery fire during their siege of England. They've got something to prove; mainly, that they won't rest until every human has had their flesh melted off by high intensity laser cannons."
COMMENTATOR: "The Bolts have won the kickoff and have opted to receive. The Skull Displacers are lining up for the kickoff, and punt returner Stepfret Williams is deep near the goal line."
JOHN MADDEN: "That's right, Stepfret must've seen the footage of the Skull Displacer's practice game where the punting bot, SPIKEDHITLERMOBILE, actually kicked a ball sixteen miles out of the stadium, at which point it detonated and showered the surrounding 500-foot radius with nails, shrapnel, and the deadly Anthrax virus. Stepfret seems mighty nervous out there today!"
COMMENTATOR: "What makes you say that, John?"
JOHN MADDEN: "Well, for one, he just passed out and is laying motionless on the field."
COMMENTATOR: "Oh come on, John! We both know that he could be dead from alcohol poisoning or a drug overdose!"
JOHN MADDEN: "A good point! Since the SALOFAWLAR has no fair catch rule or injury timeouts, the Skull Displacers are preparing to kickoff while the Birmingham Bolts appear to be running in the opposite direction of the robots, heading for the exits. What fools! There are no exits in the SALOFAWLAR!"
COMMENTATOR: "SPIKEDHITLERMOBILE is getting ready to kickoff, and - OH MY GOD! Instead of the expected kickoff, the Skull Displacers have opted to pepper the Birmingham Bolts and spectators with a round of high explosive ammunition! I haven't seen this tactic used since, well, the last time the Skull Displacers played!"
JOHN MADDEN: "That's right, people are being mowed down like lambs to the slaughter! Men, women, children - the Skull Displacers are unloading round after round into anything with a pulse!"
COMMENTATOR: "According to league rules, the Birmingham Bolts have conceded defeat and the Skull Displacers have added another 36,000 or so to their already perfect record. How do you feel about - AAAGGGGGH!!!" (glass shatters as bullets rake through the commentators rib cage)
JOHN MADDEN: "Make that 36,001 now!"

So as you can see, this wasn't such a great idea. However, it did succeed in getting the XFL menaces off our city streets, which is a good thing no matter how you look at it. Unfortunately, they will undoubtedly be buried underneath our streets, so I guess we're just dealing with a lesser of two evils kind of situation here. It's my birthday party and I'll cry if I want to.

Knowing full well that my birthday wouldn't be complete without spending hours and hours and hours entertaining people for free on this site, I felt the inexplicable need to create a Something Awful Guide to Instant Messaging. This guide will help introduce everybody out there to the various people who use programs like ICQ and AIM, and will teach you how to interact with these incredible creatures. It's like a dream come true! Or nightmare! Whatever!

Wow! Educational! And Entertaining! Check it out now or I'll stab you with a goddamn screwdriver!