HELLO this is new email from your father the on and only!!!! Today is APRIL 14 2009 the day of our horses birth. You may not remember the horse but it is probably for the best because his destiny was not for him to be at our house, not at all, in fact this horse was a bitter old steed with something to prove and day by day he would show his horse might to your mom and i "Free Me, Free Me From This Hell" i think he was saying but he really didnt know how good he had it. burgers every night a man's paradise !!!!

that horse was Never happy! always a worry wart never a bride. To make him happy we celebrated his horse birthday every year on April 14 beginning at midnight we would start telling him Happy Horse Day and Happy Birth Day Horse and wake him up at all hours and feed him the parts of the neighbors trees i could snag with a lasso. in the later years when you kids were tiny you would come out and we had a game where if you snagged a fruit or a Sports ball you would become the Horse Birthday Usurper and the day would become about you being great instead of hHorse but none of you kids ever won that game you were too small to wield the ropes power. I won it a lot though 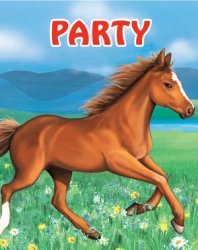 Some years we had a Festival for our forgotten friend the horse and invited people over and in 1990 there was a Horse Hat Contest where the neighborhood was asked to make a hat for the horse and run him around like a fashion show and whoever made the best hat would win a horses kiss. I was not eligible to win (i could get a horse kiss when ever i pleased) but i made one just in case just one person showed up and became embarrassed or thought they would win by default. Not A Chance. My hat was based on Dracula The Dark Vampire Price and when he would put it on his head would transform into a huge vampire head i was the favorite for sure. Naturally though our neigbors with the sunglasses tans and gym equipment came over with a big stupid frilly hat that looked like a floppy ufo. Oh Thanks For Giving Us One Of Your Husbands Dumb Hats, Deb. I said as the hatted horse trotted next to the woman.

Now it was my turn to shine!!! With some help i slid the big paper mache dracula head onto the horse head and it started going nuts jumping around and screaming (i think it was screaming it was definitely a horse noise but i can only describe it as screaming) and by this time most of the kids had cleared out or collapsed from crying too much and i was left chasing the jumping horse around the yard trying to knock the vamp. head off with a rake and nothing was going right at all and then a little sweating wheezing pig man ran into my back yard shouting "Hey There wheeze wheez Look At That wheeze Horse Is Havin A Fit !!! wheez wheez" and now im hoolding on to the horses neck and looking at this guy and finally the paper mache breaks or something probably from the horse biting it and the horse runs out through the gate that guy came in from and then he realizes whats going on and runs out too. Worst day i had in a long time

Listen up and listen good. Go get a horse because There is no trick more tough to teach a man than to love a horse for all its flaws and superstitions. a horse wont run through the woods as easily as they do on tv. a horse doesnt know how to chase a man through the city you have to drive it and tell it it is a good horse even though it goes the wrong way a lot of the time. a horse will not know the difference between right and wrong. It only knows what is HorseRight and HorseWrong which are both wrong. a horse can be thought of as a rival and a friend at the same time. a horse knows how to stack the odds and raise the stakes. you havent lived until you look a horse in the eye and tell it to go back in the house. Life Lessons From Dad!!!!!!!!!!GOODBY!!!!!!!!!!!!!!!