Lowtax Wasn't Hit By A Bus

I Was NOT Hit By a Bus, Goddammit

As hinted to in the subject line, I have most certainly not been hit by a bus. Apparently there was some miscommunication between myself and Zack "Geist Editor" Parsons two days ago when he obviously misinterpreted the phrase "gotta go, talk to you later" to mean "gotta go, talk to you later. Also, I was hit by a bus." This is a common grammatical mistake which dates back all the way to William "Gibson" Shakespeare's time, as seen in his original draft from "Comedy of Errors" (which was later adapted to a USA Up All Night movie featuring sexy coeds working a bikini car wash):

The enmity and discord which of late
Sprung from the rancorous outrage of your duke
To merchants, our well-dealing countrymen,
who were all hit by a goddamn bus driven by a guy who drank too much Nyquil.

Tell it like it is, Mr. Creepy Bus!Then William "Burroughs" Shakespeare went on to detail all his "dead homies" for roughly 80 paragraphs, vowing revenge on the Queen of England or whoever the hell was the current evil inbred royalty of the time. Knowing full well anything even remotely associated with Shakespeare or culture was strictly forbidden on this page, I assumed that Zack would refrain from posting such lies and outright inflammatory rumors. After all, that's MY shtick. However, after receiving a few particularly unsettling phone calls from people who seemed surprised that I still possessed full motor control, I realized something was on the "up and up." Something wasn't "jiggy, baby." Something was in fact quite "wrong" and it "didn't" involve using "quotation" marks where "th"ey were not necessary"." One of my redhot spicy meatball sex kittens from the forums phoned and informed me that I had in fact been hit by a bus, which was startling to hear because I had a hard enough time hauling a microwave up to my fourth-level apartment, much less an entire city bus. I'm no math expert, but I'd imagine a bus would be even more difficult to carry up stairs. It might even be as heavy as two microwaves, I don't know.

Once I got my cable modem service installed, I zipped onto ICQ and had a little talk with Zack "Geist Editor" Parsons, the purveyor of the aforementioned lies and falsehoods. I knew I would have a delicate situation in my hands and would probably have to refrain from using the words "ass" and "fucker" directly next to each other, unless of course I was referring to eFront CEO Sam Jain, who spends his free time masturbating into golfing shoes at K-Mart. However, I couldn't think of a way to sufficiently punish Zack "Geist Editor" Parsons for his update folly, as he's a volunteer worker who is trading his time, energy, and creativity for the chance to get rude email from my viewers claiming that everything he does is wrong and if given the opportunity, he should probably kill himself, resurrect his body, and then commit suicide again. Then it hit me: I could dot-com the guy! The ultimate revenge! The following is an abridged transcript of our conversation.

So, in short, I am now dot-comming Zack "Geist Editor" Parsons' brains out for his blatant falsehoods printed yesterday. I assure you all that if and when I'm eventually hit by a bus, I will get the bus driver to update this website for authenticity. He will probably write about downtown routes and how to get a maximum stench from a minimum area of armpit space. Until then, assume that Zack "Geist Editor" Parsons is a filthy liar and every update of his is crammed to the brim with bullshit. In other words, pretend like I wrote it.

As briefly mentioned last week, UPS thoroughly trashed my two computers and monitors which I shipped to my new apartment in cloudy Seattle, Washington. This is because UPS, in a move to cut labor costs and receive federal grants for reforming convicts, hires prisoners who were jailed for beating their wives. They are then given positions as shippers / handlers and repeatedly told "beat the customers' box, not your wife." After trashing millions of dollars worth of expensive electronics, the convicts eventually let out all their anger and are cured of their spousal abuse, at which point they move onto more advanced and completely different illegal activities such as beating the neighbor's wife. Keep in mind that I'm not inferring that all UPS workers are wife beaters; I'm sure they hire child molesters as well.

Since I needed a new computer in a hurry for my cable modem installation, and I didn't have the time to mail order all the components in a half-assed attempt to glue together enough wires or metal or oil or whatever the hell they make computers with, I headed to Best Buy so I could get the best buy on a computer of my choice. Now before anybody makes any snide comments such as "you shop at Best Buy, you're a fag" or anything equally witty, let me point out the fact that you're all horrible monsters and I hate you all and I pray for your deaths. I plodded into the store with a detailed gameplan in mind: walk in, buy a computer, and walk out. I estimated that this entire ordeal couldn't possibly take longer than 19 seconds, even less if I didn't get stuck in line behind some foreign guy who was trying to purchase $450 worth of Gloria Estefan CDs with a $2.00 gift certificate for Piggly Wiggly that expired in the late 1970's.

Oh how wrong I was. 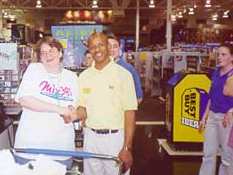 Upon getting within a 500-foot radius of the computer department, a sales employee descended upon me like a vulture trapped in a humiliatingly ugly company shirt manufactured by seventh-world country children with astigmatisms the size of medicine balls. The following is a transcript of the conversation, which I am NOT making up, although I really wish I was.

At that point the salesman vanished and was replaced by another salesman, like when you kill an evil Pod Person and another one springs up to take its place. I was then approached by this magical "Brad" character, who I like to refer to as "The Great Satan." Brad strummed up a conversation with me by picking up where his coworker left off:

THE GREAT SATAN: Hello! Is there anything I can help you with?
ME: (Feeling an intense version of deja vu) Yes, as I was telling that other guy, I want to buy this computer.
THE GREAT SATAN: Why?
ME: (Head beginning to reel) Listen, the other guy just asked me why I want to purchase this computer. We already went through this. Please just allow me to give you my money and leave.
THE GREAT SATAN: What would you say if I told you I could get you a faster computer for a cheaper price?
ME: (Looking around for hidden cameras recording me for "America's Most Annoying Practical Jokes" show) What the hell are you talking about? 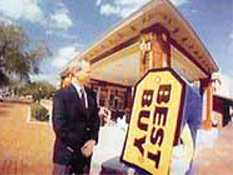 Welcome to your doom!At that point, The Great Satan began to show off the "customize a computer" sales program, which allows users to build and customize their own computer directly from the lawn gnomes and failed janitors at Compaq or wherever. The questioning procedure began to get more intense at that point.

THE GREAT SATAN: So what size hard drive do you need?
ME: 60 gigs is fine.
THE GREAT SATAN: (Outraged despite the fact that a 60 gig drive was the default selection on the menu) 60 gigs?!? What on Earth do you need 60 gigs of storage for?
ME: I systematically catalogue large bitmaps depicting babies being devoured by wild boars.
THE GREAT SATAN: (Choosing to ignore me) Well if I give you a 40 gig hard drive, drop the CPU speed down 200 MHz, and take off the video card, then the total price of this system is $1400!
ME: Uh, that's great and all, but the computer I'm looking at in your store is $300 cheaper and the same speed.
THE GREAT SATAN: Yeah, but the original price of this customized computer was $1850! Look how far I got the price down! I'm saving you $450!

THE GREAT SATAN: Can I interest you in our extended store warranty program? For only $129.99, you can protect your computer from everything! Parts, labor, everything! It's all included for only $129.99!
ME: Listen, I'm really not interested. I just want to buy this computer and leave. Please give me the computer.
THE GREAT SATAN: (Making a facial expression like I just publicly announced my unholy allegiance to Adolf Hitler's army of the undead) Are you for real? (I swear to God he said all of this)
ME: What?!?
THE GREAT SATAN: Are you serious? You're just going to buy this computer without our extended warranty?
ME: Yes. I enjoy living life on the wild side. Please give me the computer so I may buy it.
THE GREAT SATAN: You know, two out of every ten computers we receive are damaged in shipping. You should probably get the extended warranty.
ME: (Utterly incredulous at this point) You're telling me that 20% of the computers you purchase are BROKEN?!?
THE GREAT SATAN: (With a straight face) Yup.
ME: That's the absolute most stupidest and unbelievable thing I've ever heard.
THE GREAT SATAN: So are you going to get the extended warranty?
ME: If you do not get me that computer right now, I'm going to leave and never return to this cursed hellhole again. You're seriously driving me crazy. Please get me the computer.

At that point, I was finally given the computer. As I loaded it into the cart and began to turn around, The Great Satan asked if I was interested in signing up for MSN's Internet service. I didn't respond and never looked back. By the time I paid for my computer and exited the store, I was asked if I wanted to purchase the MSN Internet service or the extended warranty three times by three additional different employees. Unbelievable.

My apologies for the sheer length and painful banality of this news update, but this was single-handedly the most remarkably fucked up capitalistic experience in my entire life. This is coming from a guy who used to go to Fry's Electronics on a weekly basis. If anybody out there is looking to purchase a new computer, cram this true story into the back of your mind before heading off to Best Buy. If you still decide to go there, make sure to arrive with plenty of spare time... and possibly a handgun loaded with silver bullets as well.