I Have No Lawn, Yet I Must Scream 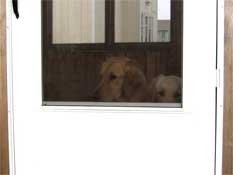 Curse you, Polly and Speedy! I hope you rot in dog jail!

I could've sworn that when I purchased my house a couple years ago, it came with a lawn. No seriously, I truly remember the salesperson explicitly claiming the house came with its very own yard. The realtor was showing me around the kitchen and proudly pointed out the back window. "Do you see all that?" she asked, waving her hand towards the hundreds of millions of tiny, pointy green blades growing from the ground behind the back porch. "Yes I see that," I replied, unsure of what exactly I was supposed to be noticing. "What am I supposed to be looking at here?" A broad smile washed upon her face as she placed her hands triumphantly upon her considerable hips. "That's the lawn," she beamed out with the utmost pride. "It prevents your home from suddenly lifting off the ground and flying into space."

Cut to nearly two years later. Our dogs, Polly and Speedy, have been using the back yard as their own personal playground for quite some time, engaging in the time-honored tradition of "running around like supreme idiots nonstop, consuming mass quantities of their own feces, and generally acting in the fashion of a large hyperactive tornado with access to a vast assortment of demolition equipment."

Like most normal Americans, I have a habit of letting my pet dogs play outside in the fenced-in yard when I leave the house, partly because they need the exercise and partly because if I leave them inside the home unsupervised, there's a good chance they'll make a ton of expensive collect calls and order morally questionable pay-per-view Cinemax movies about lesbian police forces of the future attempting to arrest drug kingpins who have nine penises. What could possibly go wrong with letting two dogs play in the yard? I mean, yards are meant for dogs to play in, right? If dogs weren't meant to go outside, Mother Nature wouldn't have granted them the ability to chew through decks, right? Right? 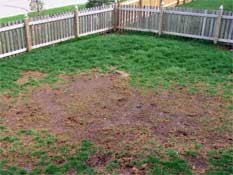 You'll notice there appears to be a large section of ground completely void of any living organisms here in my backyard. That, as you may have guessed, is the area where Polly and Speedy enjoy playing. They don't bother wrestling with each other in the area north of the wasteland, as that's the portion of the lawn dedicated to releasing chunks of waste from one hole in their body and then consuming these chunks of waste through a completely different hole in their body. God forbid they actually wrestle with each other in the bathroom / breakfast buffet section of the yard. That would just be disgusting, a regular doggy faux-pas, ranking up there with refusing to plant your nose in the ass of a passing stray dog. 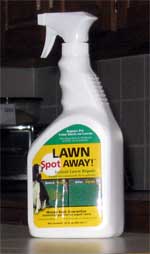 For those of you who lost your eyesight in some sort of freak Internet accident involving stray packets and a very unruly router, my yard is a complete muddy wreck. It looks like an English football team has been using it to bury their trampling victims for the past two decades. There are absolutely no traces of any life form growing from this post-apocalyptic wasteland, which is so torn up that the white plastic sod guide is actually visible from many locations. My lawn is so bad that people frequently pass by and offer to donate cinder blocks and a rusty car frame lacking wheels so the lawn's proper white trash motif will look complete. I tried throwing some grass seed all over the muddy area, but I guess I purchased a bag of defective grass, because the crap has just been resting on top of the dirt for the past two months. Birds don't even bother trying to eat this grass seed, but that's probably because they've been observing my lawn for the past few months and fear they'll instantly be steamrolled by a sentient barking, rolling blur of loose hair, teeth, and poop.

My wife recently brought back a bottle of something called "Lawn Spot AWAY!" which I guess I'm supposed to spray on the dead sections of the lawn to trick people into thinking real grass is there, as opposed to a congealed mass of propylene glycol manufactured by the French in an elaborate scheme to defraud America. I tried using this substance to fix my lawn and restore it back to its original grassy luster, but all it did was make a large patch of my lawn look like something resembling a miniature golf course after a gang of leprechauns used it for group sex.

This spray-on lawn pretty much baffles me, as the color itself is a cancer-causing shade of neon green visible from remote galaxies, and all it does is essentially transform disgusting brown mud into creepy neon green mud which is about as effective as hammering in a giant sign reading "THIS IS ALL REAL GRASS - DO NOT BE FOOLED BY ITS DIRT-LIKE APPEARANCE! I SWEAR IT'S REAL!" I suppose this product wasn't manufactured with such an extreme lawn crisis like mine in mind, but I still fail to understand how a spray bottle full of the Incredible Hulk's saliva can fool any passing idiot into thinking a patch of urine-stained dirt even remotely resembles grass. Maybe I'm supposed to spray it directly into their eyes.

The dirt dilemma is further compounded by the fact that we're currently in the middle of my favorite holiday season, National Shedding Month, so the muddy disaster area in the back yard is covered in a glowing sheen of golden hair which blankets the area like an impenetrable layer of spider silk excreted from the grotesquely swollen sac of Shelob. I suspect evil Russian scientists somehow loaded my dogs up with powerful nanobots which constantly prod their brain into producing an endless stream of yellow follicles that completely cover every square inch of our house. Submitted for your approval: 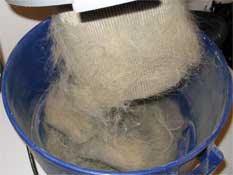 This is the result of vacuuming... FOR ONE DAY. The inside of the vacuum filter looks like those giant wooden paddles colonial women used to scoop out precious cotton candy from the cotton candy mines back when their husbands were bravely fighting to defend America's malls from the Native Americans obsessed with burning them down and erecting pagan teepees in their place. I could place Polly and Speedy inside a giant doggy wind tunnel for the next 24 hours, using it to constantly blow off the copious amounts of renegade hair commandos from them, and they'd still emit a steady stream of shedding for the next year.

The shedding problem has grown so terrible that I can no longer discern the difference between our dogs and the piles of rogue hair that congregates together to form a haystack of horror. I've got this long rod I call "The Dog Stick" which I use to prod suspected mounds of Golden Retriever hair which may or may not be my pets. "Polly? Speedy? Is that one of you?" I'll ask while poking the stick into the center of a bloated hairy mass I suspect to either be an animal or perhaps a giant mutant tumbleweed from hell. This gentle jab naturally causes a fresh new batch of hair to be released, floating into the air and eventually forming yet another questionable furry entity. The cycle never ends, folks.

I'm probably going to end up throwing in the towel, admitting defeat and writing off my lawn for dead. When you've got over 150 pounds of poop-eating claws and paws constantly digging into the ground to gain traction and better allow them the opportunity to shove their teeth into the other's eyes, you quickly realize you're fighting a losing battle. My yard never had a chance, and I assume it's only a matter of time before it completely disappears, causing my entire house to float off into the stratosphere. My next update will probably be from the moon, where I make astutely acerbic remarks about the moon rocks and how they differ from Earth rocks. At least I won't have to worry about monitoring my property from up here; all I'll have to do is stare down upon the Earth and search for the glowing green gob of landscape.