Nu Metal is for Weiners 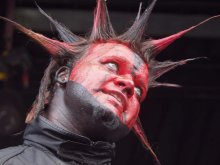 This individual grew his hair like this to prevent birds from landing on his head.Teenaged rebellion isn't a new concept in America. From greasers to grunge rock, teenagers are always willing to go to new and exciting efforts to look stupid. Stupid clothes, stupid slang, and especially stupid haircuts are all ways these young, confused teens show how "shocking" and "rebellious" they are, all in an effort to prove to the world that they are no longer children. People see these teens dressed in clothes that are slightly more or slightly less revealing than what their parents wore when they were young, and hear them using phrases like "radical," "badass," or "totally tubular." This shows them that these teens are certainly not children, and in fact are the opposite of children, like Strom Thurmond, Abe Vigoda, or Queen Elizabeth. Even during the birth of our nation, teenagers would rebel by wearing powdered wigs and writing declarations, practices which were considered both "Badass" and "Totally tubular" by our forefathers when they were young.

Young people have a need to separate themselves from their parents and find new identities, as their old identities become withered and useless, and spend most of the day sitting in a rocking chair being bitter about "those damn Japs" from Pearl Harbor. They find these new identities by looking deep within themselves, putting their childhood behind them and searching their soul. They then quickly give up and turn on MTV, which unveils a number of trends for them to choose from. Every generation has seen its share of embarrassing fads, each one more humiliating than the last. Some were at least amusing, such as the beatniks, so named due to the severe beatings they would receive for their love of poetry and bongos. Others proved to be just plain stupid, like hippies. Hippies believed in the power of love, until they were set straight in Vietcong torture camps. Still, as stupid as any of these trends were, none of them compare in idiocy to the wave of kids turning to the Nu Metal scene today.

For those of you not hip enough to be in the know, Nu Metal is the name of a new type of "extreme" music that the kids are listening to these days. By "extreme," I mean "extremely shitty." This type of music is made by bands of up to and including seven hundred members, ninety percent of whom play garbage cans as drums or some sort of garbage filled Xylophones. The lyrics are about deep and meaningful topics, like this quote from the Mudvayne song cleverly titled "Nothing to Gein"... 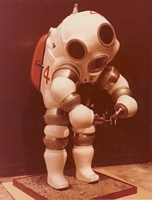 Special equipment is sometimes needed to fully appreciate the depth of this music.Bravo, talented musicians! Even if you fell down a well, or traveled to the bottom of the sea, you would not be able to comprehend how deep those lyrics truly are. Eat your heart out, Afro-man! You can never hope to touch the rich meaning that the singer of Mudvayne was able to accomplish with these two simple lines. It must have taken between fifteen to thirty painstaking seconds to come up with such an adequate description of the life of suburban teenagers, who are the main audience for this type of music. The incredible lyrics are overshadowed only by the stunning talent of the guitarists, whose use such difficult techniques as...

Nu Metal's style evolved from older, better Metal that came before it. The name Nu Metal is derived from the words Nu (meaning "new") and Metal (meaning "wood"). Bands that played Ye Olde Metal, such as Metallica, Iron Maiden, and Black Sabbath (who for some reason made no mention of a metal in their name) began to go stale and produce some really crappy songs. Metallica in particular went bad, releasing album after album of progressively poppy songs until they finally changed their name to N*Sync and became the 25 year old dreamboats they are today. Unsatisfied with the current state of metal, teenagers began to form their own bands with the idea to reshape the music into their own creation. Reshaping the music turned out to be a more difficult task than they thought, and they instead opted to just start punching their guitars and calling the horrible sounds that were made "Nu Metal." Currently, Nu Metal's style has stayed true to its roots, and continues to be an amalgamation of noises that no one in their right mind should consider music.

Nu Metal fans should shorten both their filthy hair, and their lives.Still, as shitty as this music may be, the true reason to hate Nu Metal is the atmosphere it tries to present. The bands insist to the world that they are frightening creatures of the night, like Dracula or rapists. They use names like "Sickie Wifebeater" or "# 7," which is apparently as cool and with-it as you can get these days. Kids see this and want to emulate the bands' vampiric rape-loving behavior, because it sounds so glorious. In reality, the people in these bands are regular people with regular names and regular, non-rapist values. Many people are too stupid to realize this however, and begin to dress and act like their Nu Metal heroes. The kids get piercings all over their filthy, unwashed pizza faces and wear apparel that bare the name of their favorite band 24 hours a day. They would most likely wear these even while showering, if they did in fact shower...which they don't. An unfortunate haircut tops off the ensemble, which is usually long and dyed. These people would be far better off if, instead of dying their hair, they'd consider actually dying. Painfully.

What's next for Nu Metal? As history shows us, this lifestyle is on a downward spiral which is to be followed by years of humiliating reminiscing. Remember hair bands like Poison and Ratt? These bands were once chart-topping superstars with millions of dollars and armies of fans. Then suddenly fate stepped in, and for some reason people decided wearing homoerotically tight clothing and having hair visible from space was uncool. Nu Metal faces a similar end, and one day it will be only a memory on VH1's "Behind the Music." Until then, we should just bare with it. And by that, I mean we should try to make their lives as miserable as we possibly can.