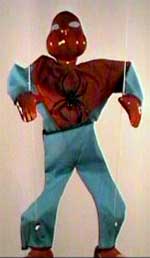 Since Stan Lee would probably sue us if we posted a picture of Spiderman, here is an image of a Spiderman marionette. Let's see your legal team go after us now, you old fuck!

There has been a lot of focus on superheroes lately. The media spotlight has been highlighting such superhero-based films as "Spiderman," "Spiderman," and the blockbuster hit "Spiderman." America is literally caught up in a superhero frenzy, purchasing as many action figures, memorabilia, and "College Superheroes On Spring Break" videos as possible. This might be because Americans believe that only a superhero such as Wonder Woman or the always alert Aquaman can save us from such real-life evils as Osama Bin Laden, that guy who sent out Anthrax envelopes, or an evil bizzarro version of the Harlem Globetrotters. I have my doubts that Wonder Woman could best Osama Bin Laden in combat, mainly because an invisible plane and some retarded lasso is easily outgunned by an army of bearded men with AK-74s and explosives strapped to their chests. Maybe she could just fly around overhead and drop those anti-Osama propaganda pamphlets that the military threw onto Afghanistan citizens back when we were supposed to care about the Afghanistan citizens. However, I am completely sure that Aquaman could kill Osama because Aquaman can do almost anything just as long as its in the water and he has some starfish he can use as throwing stars or a dolphin to knock the Al-Queda guards around. The difficult part would be luring Osama and his cronies out from their caves and into the ocean, which I believe is at least 50,000 miles away. Maybe we could trick him by sending his Hotmail account spoofed email messages like this:

Then, pow, Osama is clobbered by a porpoise. I don't see any potential flaws in this plan, but in the off-chance that it doesn't work, it's not like that's some big deal or anything. The entire world has been trying to hunt down and kill Osama for like the past six months and all they've successfully done is televise John Ashcroft looking concerned while an American flag is shown in the background. USA! USA! Go team! USA #1!

However, what most people don't know is that for every hero such as Superman, Spiderman, and Superspiderman, there are at least 10 minor-league heroes who have yet to make their way up to the ranks of "super." In fact, the superhero world even has a AA-minor league farm team, one where all the lesser heroes congregate and attempt to solve easier crimes, such as "where did my bus token go?", "who just said that?", and "do you smell that?" These hardworking everyday guys and gals are just like you and me except they have decided to wear capes and spandex while attempting to fight crime. Us regular folk don't even bother fighting crime, much less wear capes and spandex. This is because we're generally not stupid. We also don't have the lesser-superpowers that these pseudo-heroes have been endowed with either through birth, futuristic science, or being exposed to some chemical that is green and glows. Today's update will highlight some of the Heroes of the AA-League, and Thursday will feature a few Villains of the AA-League. Sometimes they have picnics together, but there's a lot of uncomfortable silence involved.

Never fear, Captain Logoff is here to disconnect your modem when not in use!

Captain Logoff - Ever find yourself "cruising the Information Superhighway" and "surfing the Interweb" when you suddenly "fall asleep" or "die"? Your dialup modem stays connected to your ISP and you run the risk of surpassing the allocated amount of hours you're permitted to stay online, resulting in outrageous penalty fees and public humiliation. Captain Logoff has the uncanny ability to sense somebody's inactive modem connection, causing him to break into their home (usually through the window) and helpfully log off the person's computer. Needless to say, he's been arrested plenty of times for breaking and entering, but this has not stopped him in his eternal quest for lower ISP bills and more gunshot wounds from overly protective homeowners.

Unzip Wizard - Blessed with the powers of hitting keyboard keys really quickly and the ability to memorize program shortcuts, the Unzip Wizard can breeze through decompressing any zipped up file from any computer. He knows all the secret shortcuts and developer tools, giving him the unbelievable power of an accelerated unzipping procedure. While it would take a normal human about three seconds to unzip a program, the Unzip Wizard can do it in like one second. Are you jealous? Well you should be.

Traffic Man - Traffic Man is the result of a bioengineering program that attempted to merge the DNA of a human being with the DNA of a roadsign. We're not exactly sure who sponsored this program or why, but hey, here he is. As a result, Traffic Man can read street signs and highway overheads even if you're driving really fast. I mean like really fast. If he's sitting in the passenger seat and you're driving through a residential neighborhood at 110 miles an hour because you're drunk or hopped up on goofballs, you can depend on Traffic Man to inform you when you're approaching your target street. He also brings along one of those hanging tree air fresheners because it's a nice gesture and there have been repeated complaints about Traffic Man's body odor.

Suicide Man - When he was a young child of the age of some age that's young, Suicide Man (then called "Bobby") was given a gun by his alcoholic dad who then said, "take this you little shit. One day you'll realize how pointless and worthless your life is and you'll want to blow your head off." These words have resonated within Suicide Man's head ever since then, and his unique crime-fighting tactic of threatening to kill himself (thereby resulting in a massive guilt trip for the criminal in question) demonstrates this. We're not exactly sure if this technique is effective, but only time will tell.

UPDATE: Suicide Man apparently died today while trying to prevent a bank robbery. The cause of death is currently unknown.

UPDATE TO THE UPDATE: The cause of death has been officially declared a suicide. 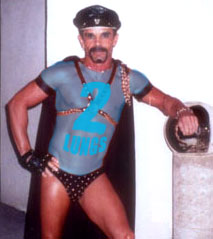 He has two lungs and he's damn proud!

The Man With Two Lungs - Ed Merkowski was blessed with a body that contained two lungs. He doesn't have one lung or three lungs, but he does have two. Chances are pretty good that whenever you hear somebody boast, "Oh yeah? Well I have TWO LUNGS, buddy!" it's probably coming from The Man With Two Lungs. We have heard rumors that he might have a switchblade or a comb that looks like a switchblade, but we're not sure if these rumors are true or he even knows how to use them. All of the Christmas cards he sends out are simply printouts of his lungs with the words "LOOK AT THOSE TWO BEAUTIES!" written below in Magic Marker.

UPDATE: We found out his true identity. It's Reginald D. Combover.

Morbidly Obese Man - It's no surprise that America is getting fatter and fatter with every day. You can't stop at a busy intersection without noticing at least 10 people sitting in their cars and shoveling handfuls of mulch into their drooling maws. Some of us try to exercise and lose weight but hey, it's really kind of hard and it's not worth it because cheese fries taste too good to give up. Morbidly Obese Man makes appearances in public places to show off how incredibly bloated and near death he is, causing people with a low self esteem to realize, "hey, at least I'm not THAT guy!" Each night, after a job well done, Morbidly Obese Man goes home and has at least eight steaks well done. Then he cries himself to sleep, tears the size of water balloons.

Coming up on Thursday: the Villains of the AA-League! Stay tuned, minor-league hero fans!

Win a Date With a Psycho!

The SA Forum Goons, a group of people who occasionally frighten even me, recently went looking for love on Sony's Online Dating Game service. I'm not sure if any of them actually hooked up, but they did end up providing a hilarious series of screencaptures during their mating attempts. 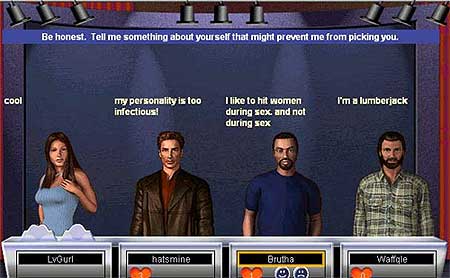 Can you pick out which two contestants are SA Forum Goons? That's a tough one! Head on over and check out an article about love, lust, and a surprising amount of rape.