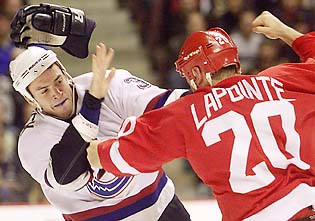 The hockey season being canceled this year has left a puck-sized void in my heart that can only be filled with caulk, peanut shells and roofing tar. It’s a goddamn shame that the sport I have grown up with and love to watch has been destroyed by two men, Gary Bettmen and Bob Goodenow, both of whom have the combined IQ of a ball of bubble wrap. I’m convinced they are really secret golfing agents who want professional athletes to spend their time on the green all year round. These two knuckleheads have singlehandedly taken hockey out to the back of the shed to shoot it and then rape its corpse. The sport has become bloated with expansion teams, spreading out the talent pool and increasing the number of retarded team icons. Face it, most of Americans are not diehard hockey fans and it shouldn't be considered a mainstream sport like football and baseball. The fact that NASCAR is the biggest spectator "sport" in America is indicative of our preoccupation at being total retards when it comes to good taste on any subject whatsoever. I'm not saying there are easy answers for this pickle hockey is in, but this is totally unacceptable. What am I going to do with myself?

With the hockey season now torn away from my loving arms, I am left with nothing. I don't have a very good personality, and quite honestly my life is empty and meaningless. The only thing I have going for me is rooting for my regional hockey team, the Detroit Red Wings, and giving high fives to drunken strangers with face paint. I don't have any friends, so the only unconditional companionship I have is my parrot, Dr. Mindbender, and the people I meet at the games in Joe Louis Arena and the local sports bars. I can't find this kind of comradery with the fans of other popular sports. Football fans are too loud and hairy, basketball fans are far too violent, and baseball fans are mostly Civil War veterans and degenerate alcoholics. With my sense of community and way of life demolished by greed, I am left wondering what to do with myself. How am I to spend those countless hours that I normally dedicate to playoff hockey in the coming months? How will I cope during these troubled times?

Well I’ve got the ol’ brain factory chugging along with a case of Natty Lite and pack of circus peanuts, and I’ve come up with some pretty good ideas for some new time killers, along with a serious case of shingles. I’m hoping that at least some of these will be able to satisfy my need to leave my house and be active in the community. My house is full of ghosts, mice, and ghosts of mice and, quite frankly, I don’t want to stay here. 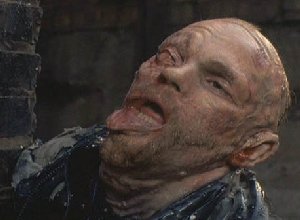 Things to do instead of watching hockey, besides playing with myself:

Vandalism: Like the countless other confused and angsty youths of Detroit, I will take my frustration out on the citizens of the city in a random and destructive fashion. No one shall escape the spray paint holocaust and flaming brick rampage that will ensue this hockey-less spring. The energy that was once spent in a constructive fashion, rooting for teamwork and friendship, will be transformed into a tornado of terror and minor misdemeanors. Actually the vandalism in Detroit, notably on Devil's Night, has dropped significantly since the Wings won the cup in '97. Now that there is no chance of bringing that oversized Holy Grail back to the city, the subjects are clamoring for blood. There will be no rest for Hockeytown until we get our sport back and also get retroactive compensation for losing this year's season. The next season must be twice as long.

Editor's Note: Maybe this wasn't the greatest idea. My spray paint work leaves much to be desired. I tried to spray Homer Simpson on the federal courthouse, but it looks more like a retarded dog. Also I tried doing a skeleton warrior riding a dragon on a school bus, but it kept moving to pick up children and the end result was a collage of mostly colors with no semblance of any form whatsoever. I give up!

MMORPGs: Probably the most notorious and life crippling time killer known to man is the massive multi-player online role playing game. I know this to be true, for I myself have been a serial offender when it comes to this most dangerous of games. It started with Ultima Online, an innocent enough game that involved beating up pigs and mining for ore. But then I became obsessed with making my guy a really good carpenter and started spending all my time building stools to sell at the market and save up for a boat. If I’d spent this time on a real job, I would've made enough money to buy a real boat and maybe some real friends instead of an eight year old Korean boy (who I thought was a girl because he was playing a warrior princess) that I married online with a dowry of six mules and a trunk of dyed pantaloons. 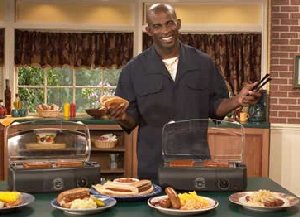 Soon I became disillusioned with the game and started murdering poor low level characters in the forest who were just chopping down trees and trying to make do with their harsh electronic existence. Like an angel of death I would swoop down on the pour souls and attack with no mercy as they futilely tried to hide behind trees and threatened to hunt me down with their tough character. "I was like you once," I explained to my victims before their demise. "Sad, alone, chopping down wood to make my cabinets. I have evolved." Then I would kill them and spread their body parts on the four corners of the map. I was branded a murderer and outcast, and was then turned into a ghost so I stopped playing. I started to go outside again and my interest in real things was renewed, such as my love for hockey.

Now that there is no hockey season and all my friends are playing World of Warcraft, I'm thinking that it might be my time to return to the world of online gaming. I want to make an ork that can use a gun and make leather pants and has blue eyes like sparkly gems, and has a pet spider. I'm sure I'll get tired of it like most online games but maybe, just maybe, it will be enough to get me through these troubling times.

Playing cat and mouse with a local constable: He shan’t ever catch me. This game we play, the local constable and I, is one of trickery and riddles. I have murdered again. The clues I left are subtle and virtually non-existent to the untrained eye. But this constable is no pushover sally. He can be as cunning as a spotted jackal, and twice as nice. He has chased me over seven continents, four oceans, and even the moon. He knows I’m guilty, and I know he knows I’m guilty, but he has no sufficient evidence to charge me with the crimes - only circumstance and hearsay. Our battle continues.

Curling: I guess if I’m really desperate, I can start to watch curling. You know, that thing with the lumpy Canadians throwing rocks down the ice towards a bulls-eye while two other people clean up with a broom. Maybe I can make it a drinking game and have a beer every time they get the rock into the bulls-eye. Or maybe I’ll just shoot myself in the head with a shotgun. Yeah, that sounds good too.