With Codes Safely in Hand 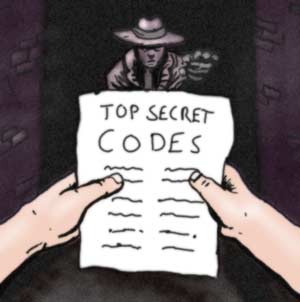 Just as soon as I had quarter-circled my way around the building, a sinister enemy accosted me. This is the sort of danger that lurks at every turn when you're carrying codes. Clutching codes is like making yourself a magnet, as attention shadows you at every turn, provided of course there is a visible light source with which to cast shadows. Eyes spy upon you, always looking for ways to wrestle the codes from the safety of your hands. This man, this sinister agent of an obviously sinister cause was eager to take my codes and enlist them in any number of perversions.

"Excuse me, but what's that in your hands?" he asked with suspiciousness containerizing his every enunciation.

"These?" I asked as I waved the printout of the codes in the man's face. "These are codes, sir. These are my codes."

"Please let me see them."

"No, sorry. These codes are my codes."

"I want those codes," spoke the shadowy man with a voice percolating in disdain. Though he only said four words, his facial expressions, his stance, and his gestures said a lot more. He presented to me in his overall demeanor an entire encyclopedia set dedicated to the topic of impending violence. He wanted my codes – I could tell just by the way he looked at me. And also because that's what he specifically requested from me.

"I cannot part with these codes under any circumstances whatsoever!"

"But those codes belong to me."

"Do you even know what these codes do?"

"Of course not, that's why I want them!"

"You're just greedy. You covet codes you don't have."

"Well, maybe if people didn't hog codes all the time! Did you ever think of that?"

"It didn't cross my mind. I apologize."

"People like you always go around flaunting your codes and it makes me sick," the man said. "As you can well see I have no codes of my own and therefore have a harder time getting through life. So what do you say to a partnership? Fifty-fifty, codes for one and all!"

Having successfully thought about it I responded with a resounding, "Nope."

"You didn’t even think about it!"

"Well, I never! How dare you accuse me not thinking about your proposal of giving you my codes so that I have no codes and you have all the codes!"

"That's not what I proposed, you asshole! Jesus, I've got a mind to smash your face with either one or the other of my two fists! Probably this one. My left one."

"Hey, calm down! What makes you think these codes are even something you want?"

"Fine, we won't discuss this further. I'll be on my way with my codes." Snappy as ever, I showed him who rides up front in this bicycle built for two.

"I'm feeling very threatened so I should be on my way!" I yelped in a defensive voice, as if though my vocal cords were being made to feel uncomfortable by a sexier set of vocal cords trying to seduce them.

He would! Like a man of his word, he proceeded to recklessly hurl his left fist in the direction of my face. As he did this, time slowed to a disabled snail's pace. I watched with terror as his fist approached docking position with my mouth, examining his knuckles in detail along the way. I had to do something. I had to stop him from punching me in the face and thereby leaving me in no condition to safely and adequately protect these codes! In a moment like this a lesser man would buckle under the pressure and transform his face into a catcher's mitt eager to receive the incoming fastball. In less than the infinitesimal amount of time that it takes for a man's fist to depart and arrive at its destination, I was able to devise a plan, a distraction.

"Wait!" I shouted! My intervention came in the nick of time, and tested the very limits of his fistfight brinkmanship. This was it, the moment of profound uncertainty. I had gained clemency, but for how long? He postponed giving my face a savage gift, and I most certainly had his attention, but how long before he fell back on violence?

"What? Are you going to give me the codes?" he impatiently inquired of me.

"I just remembered I have to go to a doctor's appointment."

"What?" he asked in that rare kind of astonishment that only comes from finding out your left arm is actually a turtle named "Mr. Pete." His arm was not a turtle, mind you, but he was very surprised.

"I have a doctor's appointment. I sure better get going!"

"Hold on a minute! Can't you reschedule?"

"No, I already did several times. This is a can't miss appointment."

"Maybe you should leave the codes with me, that way they won't fall into the wrong hands."

"But what if the doctor tries to take them? He could put you to sleep and take the codes."

"I have a good relationship with this doctor. He respects the sovereignty of my codes. He has to, otherwise I would find a better doctor."

"Can I just briefly hold the codes? I'm tempted to get some codes of my own, and I want to see how I would look with codes in hand."

"That's asking a lot of me. Look, I really need to get going. If I show up late they might give my appointment to someone else, and then it's no telling how long I have to wait to reschedule. I'm sure you know how that is."

"I have pretty good health, so no. How about I come along? That way if the doctor tries to steal your codes, I can put a stop to it."

"Look, these are the first codes I've ever had. I really like these codes. Why can't you just get your own codes and let me have my codes?"

"You've made a grave enemy today."

"You already tried to punch me before, remember? Our enemyship has been well established at this point. You're just preaching to the choir, mister. Stop trying to be the suitor of my codes, for I will never allow such a courtship!"

"Why do you need to see the doctor?" the man inquired, breathing yet more life into this unfortunate conversation.

"I'm under a lot of stress lately. Carrying these codes is a burden and it's difficult because people like you won't leave me alone. It's this celebrity status, this new level of fame and stardom I've achieved not by any talent or individual personality trait of my own, but solely due to my possession of codes. It's very frustrating, but I'm working through it."

I felt a great sense of relief sharing my feelings with this strange man. I wanted to tell him everything as I wrapped my arms around him and enjoyed the warmth of convection, but that would be too much to dump on him at this point. He had emotions of his own, and they were quite stirred up.

"I guess I never imagined how hard it was for you all this time. But I still don't see why you can't share some of the burden. You and me, codes in hand, against the whole world!"

"Look, it's just that these codes aren't for you. They wouldn't mean anything to you. You'd probably just use them in all the wrong ways and never get anything out of them. I'm sure you'll get your own codes eventually. They'll be real special codes, too! Some day you'll understand my predicament. Someday soon."

He seemed to accept my answer, which was good because I was about to jab my fingers into his eyes and sail away as fast as my feet could row. This was a one-player game and he didn't even have a controller. There are predators everywhere, waiting to triangulate on the location of anyone with a good set of codes in hand. That's the way the world works.

When I finally made it safely home, I immediately closed the curtains and locked the door. I even added in an extra layer of security in the form of a chair to block any home invaders swift enough to pick the lock. There was no time left for mistakes, not now in this eleventh hour. I carefully clawed at the very foundations of my dwelling, looking for any sign that its security had been compromised. When I was finally satisfied that all was well, I prepared to make sweet use of my even sweeter codes.

Plugging in my special decoder cartridge, I carefully entered the codes and relished a new frontier of excitement. Before I was vulnerable, but now I would reap the rewards of infinite health and ammo. There was just one catch to screw everything up. I was still vulnerable to death if I fell in pits. What good was all the health in the world if you could still die from falling? These codes had let me down.