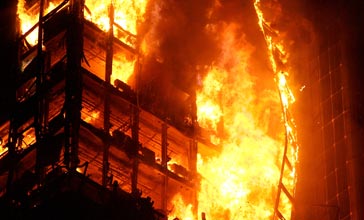 Another wonderful semester at Pendelhurst University Memorial University has begun, and since our old University was burned to the ground due to violent student riots, we've decided to be less disingenuous with our course listings this semester. We have also removed the flamethrowers from the science labs, and replaced them with common street pistols and/or bazookas with acid rounds as a precautionary measure. Please consider these exciting courses, and don't forget to visit our exciting Bursar's Office!

Go on an epic ten-week journey with Dr. Balahadra to discover just what the fuck he is saying! Students should expect a nine-week learning curve to adjust to Dr. Balahadra's unique "spin" on the English language. Until then, some meaning may be discerned by picking out the various curse words the administration taught him as a joke. Experience moments of intense confusion that will prepare you for your life in the job market of the confusion-based future! We honestly have no idea what this course is about because the syllabus is in that crazy "language" he insists on using, so just try to wing it and don't sit in the front row, for the love of God do not sit in the front row. Dr. Balahadra was hired because we assumed people from India were very smart, especially people from India that claimed to travel to America on a magic carpet from Pottery Barn. Wait a minute, I don't think there are Pottery Barns in India! Or magic! Actually, we don't really know if he is Indian. This one time, we saw him eating curry. I guess maybe you should buy the book.

The book has a picture of an elephant on it.

Mannnnn, it's like we're being controlled by The Matrix that in this case are the corporations of Bush's 43rd Reich! Does my hair smell like feet?Yeah, that's right, you get to watch movies! In class! At prices only slightly higher than an actual movie theater! Make sure you tell all of your friends who decided to not go to college that you get to watch movies, and not like in sixth grade on the days when it would rain during recess and you would have to stay in watch the beginning of Mrs. Doubtfire over and over again. I mean, Christ, you didn't even get to the part where the dude turns into a chick! Students will watch and discuss classic films from Citizen Kane to Easy Rider, but The Matrix will probably be shown sometime during the last week so people will actually show up and share their ignorance about philosophy. Expect the white guy with dreadlocks in the Tool shirt to ramble on about "reality" and "the third eye" for about forty minutes. Upon exiting the class, you will have a passing knowledge of film history, or at least why those movie references were so funny on The Simpsons. Remember that episode with Mr. Burns and his lost teddy bear? Boy, that was great. I have no idea what I'm writing about anymore.

I mean, have you seen her? Yeah, I know what you're thinking, "What's she teach?" I have a question for you: "Shut up." Don't blow this. She's got to be, what, 23? You know how often tail rolls around in an environment like this? You know what they call an unmarried woman in her 50s? Doctor. That's the caliber of crap we have to put up with. Don't become what I am. Sign up now, and don't tell anyone. You know, you could be staring at her for fifty minutes three times a week without even carrying any singles on you. The chances for you to score in some sort of Cinemax episodic series-inspired secret tryst are dwindling as you waste your time with this pointless reading! It'll be just like all of those hot teachers who molest their teenage students except it will be much hotter and completely legal. Don't tell you friends about this. They are your enemies. Blind them. She will be yours.

Also, Shelly, if you're reading this, I'm not talking about you and I noticed you never opened my Secret Santa gift. I know I was never your official Secret Santa and you caught me on three consecutive occasions smelling your office chair within the same 5-minute period, but that is just unprofessional. Please love me.