If you grew up in the good old US of A, chances are you might remember watching those crazy Public Service Announcements as a kid. I don't mean the pretty little ten-second blurbs that feature some second-rate soap opera ho telling you that you should stay in school because school is pretty like fluffy kittens and then some charming piano music and a little rainbow graphic. I am talking about the at least three-minute, sometimes painfully more, fear marathons that left you feeling terrified, desolate, and alone but with a vague sense that everything would be ok as long as you listened to the wise flashing light-box.

Maybe people in other countries know what I'm talking about, I have no clue. Being an uncultured swine it is completely alien to think that people in ethnical were exposed to the same sort of thing. Then again, this might be due to the fact that I tend to think of most people living outside of the United States as faceless, monkey-like puppets grubbing about in little pits of mud for food but that might be because I have seen one too many National Geographic specials called "Grubbing in Pits: The Non-USA #1 Story."

When I was in second grade, they showed us a long video, from now on referred to as "The Train Video," which I suppose in retrospect was designed to scare us away from playing on train tracks but merely succeeded in traumatizing us. The dialogue went something like this:

Train Guy 1: (examining a hideous, burnt, dismembered corpse on the tracks) Oh no, looks like someone was playing near the tracks again, Steve.

Train Guy 2: It looks like he and his friends thought that it would be cool to jump on the train and grab the electrical wires overhead for fun.

Train Guy 1: (kicking the corpse with the toe of his boot) Now he's burnt to a crisp and the train ran him over and cut off his legs.

Train Guy 2: Too bad they had to play near the train tracks.

Train Guy 1: Yeah, they thought that it was cool to play near the train tracks.

This video was at least a half an hour long, and they showed dead kid after dead kid, all killed by the train in one form or another. One of the kids had thought that it would be a good idea to put a spike or something on the tracks for the train to run over and the train had shot it out and into his head. They called him, "Poor little Spike-Head." There was a slightly older kid of maybe 16 who thought he could play "chicken" with the train, but of course the train is an unstoppable force not to be reckoned with, so it tore his car in two and he ended up stuck in the space between the windshield and the dashboard. I didn't know that people could fit in there.

The teachers watched the kids watch the video with a morbid fascination and probably secret satisfaction. Some of us watched interestedly because there were dead people on the TV and none of us had seen dead people before, especially dead children. Some people didn't take it so well. One girl started crying hysterically and her parents had to be called to get her from school. She didn't like the train video. I assume that she is out there somewhere suffering from a paralyzing fear of trains to this day, perhaps still crying every time she needs to cross tracks in the car or she sees a train on TV or she masturbates to anthropomorphic hot train on train slash fiction.

There were other traumatizing Public Service things. In fourth grade they had a government sponsored visit from the Orkin man, who, for those of you not familiar, is a bug-killer dude representing the Orkin corporation. They distributed to us kids a really lovely coloring book filled with interesting bugs to color, but it included a picture rather like this: 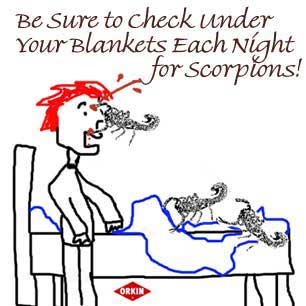 Thanks to Orkin it was weeks before I would sleep with blankets. I would wake up freezing cold but happy that there were no nooks and crannies in my bed in which the scorpions could hide. This was despite the fact that we lived in Wisconsin, where the most harmful thing that exists is probably a deer when you hit it at over 50mph. It was probably more likely that I would have come down with some sort of pneumonia from having to shiver in the cold night for fear of a scorpion attack. It was more likely that a talking gibbon would rouse me from blissful slumber with an offering of delicious and exotic fruits while he sang ToTo's greatest hits (including "Africa" but not "Rosanna") and shaved his armpits.

I'm not sure what the rationale was for the US government to pay Orkin to come to our school and hand out those damn coloring books, but I have a feeling that it was the possibility of the kids seeing it and getting all freaked out only to tell their parents to call the pest control people immediately. I told my parents to call the pest control people but they didn't listen to me, and when I told them that there were scorpions in my bed they agreed and said that they didn't sting unless provoked so that I shouldn't worry... unless I accidentally kicked them while I was sleeping, in which case I was dead. Thank you parents; some day I will pay you back in blood. 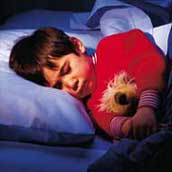 What a shame that this child's happy dreams will soon be interrupted by death.

Another terrible Public Service announcement was one that aired on TV while I was growing up, most likely in the late 80's or because it was on during "Charles in Charge." In this video, a girl lay sick on the couch and her mother worriedly took her temperature. The mother turned out the lights for the girl to sleep and you heard her heartbeat and saw that she was breathing. Seconds later, her heartbeat turned into one of those flatline sounds and the camera zoomed in for a close-up shot of her open mouth to indicate that she had stopped breathing. Her teddy bear fell from her dead and lifeless hands. The mother came in to check on the daughter, turned on the lights, and began screaming. At the bottom of the screen was printed:

Being very young myself, I had absolutely no idea what carbon monoxide was, so the jist of the commercial became: YOU ARE YOUNG AND FEMALE LIKE THE GIRL IN THE COMMERCIAL. PREPARE TO BE SICK AND DIE IN YOUR SLEEP. Thank you, no sleep for me for quite some time. Of course, I asked my parents eventually what carbon monoxide was, and their answer was not very reassuring, "Oh, it's a colorless, odorless gas that can come into people's houses from the furnace. It kills you." I think that the mere fact that I had to breathe or die got me over this fear, but the memory of that dumb teddy bear falling onto the floor stayed with me for a long time.

These things will give you AIDS!

There were a couple of other traumatizing things that they played ad nauseam on TV while I was growing up. Another great one was the AIDS PSA. This featured a young man staring at himself in the mirror and having all of these purple blotches on his face. Text flashed across the screen:

YOU CAN GET IT FROM ANYWHERE

The man in the mirror started looking worse and worse.

YOU CAN GET IT FROM ANYONE

Seconds later, the man having to brace himself against a wall to stand:

YOU ARE NOT SAFE

They showed the man lying in bed, obviously too weak to move.

AIDS WILL KILL YOU

Ta-da! That was it. Hooray for public education about a spreading epidemic. Stuff like this is what caused people to think that they could pick up HIV from toilet seats and mosquitoes and gay people and stuff.

Another good PSA was the one with the kid playing soccer next to a large, fenced in set of power transformers. One of the kids kicked the ball over the fence and they had a short argument about who was going to go get it. The kids went in to get it and, of course, touched the power thingy. They flashed the screen black and white for a second and then gave the dates of his birth and death. No "Don't play around power stuff" message or anything. Just the kid kicking the bucket and the years he had lived. If anything it made me want to purposely kick something into one of those areas and have the kid I didn't like go in after it so that I could see him turn black and white, too. That was sort of neat looking.

Whomever is responsible for these terrible things needs to be dragged out and shot in the stomach, seriously. None of these were helpful to me and in fact they either inspired wrongdoing or they made me cower in fear for long periods of time. I am sure that there are still Public Service Announcements airing that are terrifying a new generation of kids, but they can't be nearly as visceral or as completely over-the-top as those made back in the good old late 80's early 90's when America was coming to terms with the state of its teeming masses. Isn't there some one I can sue over these things? I want to sue somebody.