Everybody hates the people they encounter during holiday shopping. For example, when you're waiting in a 40-person line to check out, and someone three spaces behind you says "I hate holiday shopping," you hate them even more than the other people in line! Who the fuck are they to complain? You were in line while they were still in diapers. But no one can provoke a psychotic hatred of the holidays quite like these fine human specimens. 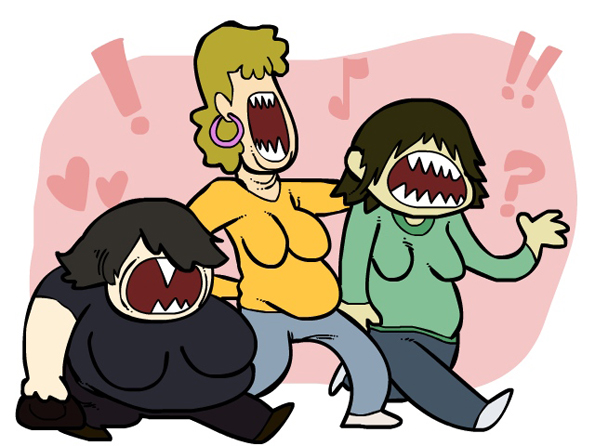 Chubby groups of sisters, late 30s to early 40s (the loud ones, who giggle uncontrollably) *sisters as in relatives, not black chicks*

Overweight women seem to hibernate during the spring and summer seasons. Instead of using the beaming sunlight to help them broil off excess fajita, cheesecake and sandwich fat, these porkers spend April-September with the air conditioner on, sobbing into Kleenex during obscure made-for-TV films. The type of films that skip all foreplay and aim right for the tear ducts. Films where Brian Dennehy plays Sarah Jessica Parker's emotionally devoid boss, with an offensive, grossly fabricated Tennessee accent. Films where Morgan Freeman plays the riveting, uneducated janitor, who overcomes racism by perfecting his grandmother's muffin recipe. You know, those films?

The women who like these movies are the reason Nancy Grace is employed. If a boy in Alabama gets abducted by his estranged stepfather, these piggies are glued to the screen. On the phone. With each other. Loudly deliberating.

These overly sensitive, obnoxious public parasites apparently ONLY leave the house on Christmas Eve-Eve-Eve, Christmas Eve-Eve, Christmas Eve, or Christmas Day. Of course they aren't at home terrorizing quarts of Cherry Garcia together, like they would on any other regular day. No, on those very hectic retail days, while a majority of the populace is out getting last-minute presents for loved ones, these women seem destined to plague your life -- on the bus, behind you in the movie theater, in line at Best Buy, or even at Starbucks.

Yes, that's right. Wanna grab a quick cup of coffee at Starbucks? Think twice. Because Janice, Jody and Jessica are having a sisterhood powwow at the table closest to the barista counter. Their laughter sounds like Sloth from The Goonies screaming to be unshackled by the Fratellis. They quickly go from hysterically laughing about "The time Daddy wore a pink fanny pack to Newport Beach" to hysterically crying about the "untimely" death of Fabio, Jody's 16-year-old Basset Hound, who most likely offed himself because he was tired of sharing bowls of cereal with Jody, a.k.a. "Jodles" (the nickname her sisters gave her).

People with weight loss as their New Year's Resolution

It's a trap. "What's your New Year's Resolution?"

That is a disgusting and rude question, asked only by people who don't understand the implications of the New Year.

Example:
Quitting heroin is a deeply religious act to commit when the year turns over. Heroin (created by Gregory P. Heroin in 1329) is a dangerous substance to become addicted to, with dry mouth, insomnia, and irritability as common side effects of overdose. It is said in many ancient cultures that on January 1 at 12:15 am, Gregory rises from the dead and bestows anyone seeking to quit the drug with the spiritual wherewithal to do so. The price: the quitter's first-born child will be born blind and unable to digest dairy products. This is precisely why New Year's Resolutions are serious business, and why they are not to be tainted by acts of shallow self-interest.

There are a few problems with people who have New Year's Resolutions such as "Lose 10 pounds by July for vacation in Cabo!" If you need your New Year's Resolution (an act of spiritual cleansing) to be the proverbial foot in your ass, encouraging you to lose weight, you are destined to be a fat procrastinating slob. Forever. Becoming a healthy eater who engages in 30 minutes of cardiovascular exercise 3-5 times a week is not an act of someone pursuing the New Year with passion and drive. It is an act of someone who grasps self-respect and self-worth. What you need to admit is that you are a lazy, potato-chip-addicted heifer who expects the month of January to somehow magically provide you with the motivation to make a deep lifestyle change. This will not happen. January is a cold month that will defeat you and make you crave comfort food. It's cold and gross outside.