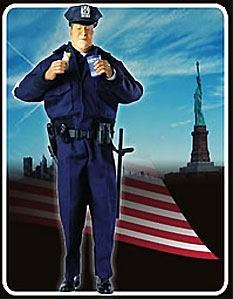 Being a police officer is both exciting and patriotic.Being a police officer is one of those jobs that kids always talk about wanting to have when they become adults. Police officer, fire man, and werewolf are the three professions most likely to be mentioned by children under the age of ten. Somewhere around ten your body goes through a change and you begin to develop strange feelings in your groin. Soon after you realize that being a cop is a dangerous job that doesn't pay very well unless you're on vice squad and stealing drug money from the evidence room. Then, around the time you hit thirty or so, you start to think about your life as a certified public accountant and you realize that maybe it would have been worth it to risk your neck for half the pay. This is caused by watching a lot of TV shows like "Law and Order", "Law and Order: Special Victims Unit", "Law and Order: Rodeo Police", and "Law and Order: Vampire Hunters Division". The excitement you try to produce in your life by doing things like Kayaking, mountain climbing and heroin, are there every day and very tangible for those boys in blue.

Being a precocious twenty-four year old I've already got my middle-aged paunch and my fill of Law and Order two-part episodes to know that being a cop would be just right for me. I want to grab the bad guy by the cuffs and slam him face-first onto the hood of my car. I want to bully the Internal Affairs guy in my department for betraying the "cop code". I want to shoot a fifteen year-old who I thought was going for a gun but was actually reaching for his wallet. Most importantly, I want to solve big time crimes!

Since I'm way too lazy to ever haul my ass to a police academy and get myself a cop education with a gun nut, a black guy who makes helicopter sounds, and Steve Guttenberg, I have instead taken to solving crimes in my every day life. This provides me with the thrill of intrigues minus the danger and hard work of being a police detective. Sometimes I even pocket change sitting on the dresser and pretend it's a kickback I'm taking from a mafia soldier in exchange for letting him run a protection racket out of my bedroom closet. Since I've now got several cases closed under my belt I feel confident in sharing with you my exploits as a police detective of the MAPD (My Apartment Police Department).

The Case of the Baron's Monocle

The Scenario: My first case came to me in the middle of the night, when I was awakened from a sound sleep by a telephone call from the local constabulary. They notified me that during a dinner party at Warren Mansion, Baron Hector Von Elazondo's monocle had disappeared right off his face. I hurried to the mansion where I conducted interviews of the distressed house staff who were searching frantically for the monocle. There were a number of shady characters in attendance including Evan Collier, international rogue and zeppelin racer, and Marissa Dinsdale, whose pen has scribed more ruinous unauthorized biographies than I have teeth in my head. I carefully observed all of these people, even the Baron who might have something to gain from the disappearance of his bejeweled monocle.

The Mystery Solved: I quickly discovered that the absence of the monocle was duly noted during the serving of the second course of the meal, when Mr. Collier made a scandalous comment about hemlines. Shortly thereafter madam Von Elazondo noted that the monocle had vanished. Of interest was the fact that this transpired during the second course, a cold gazpacho being served from a large tureen carried from bowl to bowl by a serving girl by the name of Margaret Hackapple. Ms. Hackapple denied any knowledge of involvement, but a thorough search of her quarters located the monocle, secreted in a small compartment in a snuff box.

The Reality: A box of apple Nutri-Grain bars fell behind the refrigerator and I had to use a broom handle to push it out.

The Case of the Bloody Glove

The Scenario: While visiting my good friend Darvin Buckminster at his estate in Rolling Top I opted out of cigars and billiards in favor of a relaxing stroll across the grounds. After many minutes much to my surprise the glowing visage of a mastiff emerged from the treeline that separates the green from the moor. I was petrified by it and could only watch as it approached and dropped a single white velvet glove at my feet. As it departed I regained my senses and picked up the glove. Upon examining it I noted the presence of stains that were definitely the blood of a human or other red-blooded animal. Without prompting I moved to unravel this mystery and discover whose bloody glove had found its way so strangely into my possession.

The Mystery Solved: Everything was caused by the phosphorescent properties of swamp gas. The glove belonged to a duck.

The Reality: I went to do laundry and forgot to bring the detergent so I had to buy powdered detergent from one of the vending machines at the Laundromat.

The Case of the Torso Strangler

The Scenario: A series of grisly killings in the slums of the old town district had gone unsolved for so long that my expertise was once again required to sleuth out the culprit. Each of the victims was a young woman aged no more than 16 years who had been strangled with incredible strength by compressing her torso. The police believed we were chasing some sort of deranged giant, but my intuition led me elsewhere, namely to the pages of the daily City Times.

The Mystery Solved: After searching for clues at the scenes of the crimes I discovered that all of the bodies had an unusual amount of orange hair clinging to them. While the police took this to signify that a crazed Irishman was the man responsible, and consequently cracked about a number of innocent heads in the Irish ghetto, I turned to the newspaper for additional clues. Most interesting to me was the report of an animal escaped from the zoo, namely a three-hundred pound female orangutan. Even more interesting was the fact that the orangutan, named "Spotty the Chimliest", had recently lost her young child to lion that leapt over the fence dividing their enclosures and tore the poor ape limb-from-limb. Out of maternal instinct, not anger, poor Spotty was crushing the life from girls all across the old town district. Following a series of clues I helped the police locate Spotty and in a bitter struggle she was unfortunately killed by a series of baton blows to her primate skull.

The Reality: I had a jagged edge on the toenail on my big toe and it got caught in the heavy comforter on the bed while I was asleep and pulled half of my toenail off. To prevent further toenail incidents I filed it into a rounded corner.

The Case of the Hat Pin Harlot

The Scenario: My most recent case involved a most personal assault by a lady of the evening. Known among the riff-raff as Bertilda, she was a portly woman, but comely in the face and still quite popular with the drunken sailors just in from Belhapshire. Her crime was the violent and sudden insertion of a hat pin into the fluid canal of one of her more upstanding customers who I will not mention in this report. The man, being most influential in the community and understandably distressed, insisted I be called in to help locate Bertilda, who had gone missing since the incident.

The Mystery Solved: The Freemasons were behind it, but I can say no more than that lest I violate my solemn oath to them and have my tongue plucked out and burned in a fire. Needless to say, Bertilda is not among us any longer.

The Reality: I was grilling out and I realized we were out of charcoal so I had to hurry to the Osco a few blocks away to purchase some.

These are just a few of the cases I have managed to solve with my keen insight into human nature and incredible ability to spot telling clues. I look forward to a long and rewarding career as a detective for the MAPD and hope to one day thwart the plans of my nemesis Dr. Scotty D.

Hello, Livestock here. As you might have guessed or possibly wagered money on, today is Phriday. That means you need to click this link and this one as well. Both links lead to the same place, but you didn't hear that from me. This Phriday's theme ingredient is famous monuments, landmarks, and tourist traps. Here is a sample: 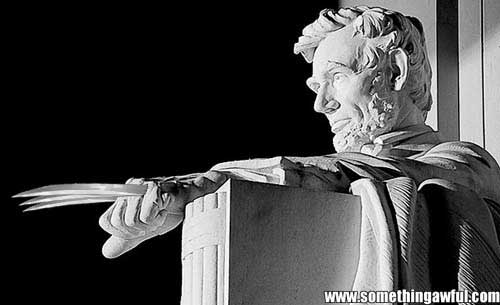 Yeah, so go read Photoshop Phriday! You won't be sorry!