This little explosion is nothing compared to my post office inferno of death. Nothing, I tell you.

While I must say that I fully understand that it is a luxury and an amazing triumph over logistics to have people bringing letters and other things to far reaches of the globe for me, I feel that the US Postal Service is at this point one hair's breadth away from being set on fire by me. When I say this, I don't just mean that I am going to walk up to the local post office branch and sprinkle some gasoline on it. This will not be a campfire. This will be a raging inferno of heat and flame that will selectively decimate all post offices in its path and leave behind nothing but ash, misery, and charred earth where the post offices used to be.

I consider myself to be a fairly patient person. I don't smack crying children when they annoy me in stores or in movie theaters (most of the time) and I put up with Rich "Lowtax" Kyanka cutting his toenails in the bathtub on a regular basis. To my knowledge I have never killed anyone but every now and then there are large chunks of time of which I have no memory and I usually wake up in a dark and filthy alley with blood on my clothes. I don't think that those incidents have much to do with my lack of patience, however. All in all, I am laid back and large-and-in-charge, much like TV's Scott Baio. That is, until I have to deal with the USPS, and even then I wait a long time before my rage causes me to launch into a blinding fury of destruction. 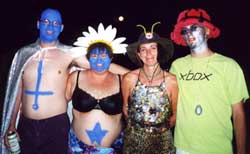 Hooray for the lovely people of downtown Seattle. May they soon be hit by a bus and then hit by the Space Shuttle.

I do all of the merchandise stuff for the site, so I have to mail a lot of envelopes containing shirts, severed fingers, and the like. I don't mind having to mail a lot of stuff, but the post office people seem to have issues with the fact that I actually want to use their service. The post office that has the PO Box for Something Awful is 20 minutes away from our house and is located in downtown Seattle, so driving down there always means being raped up the ass by traffic on the 5 and having to see all of the "alternative" people that parade around the streets like the winners of the relay race for retards at the Special Olympics. It's no fun. So I usually try to drop off stuff at the post office that is two minutes away, instead. Little did I know that this was VERBOTEN!

Apparently the post office close to me wants me to take all of the stuff I have to mail to the post office that we have the PO Box at. This is bad. I don't understand this because last I checked, postage is postage and I should be able to mail things from anyplace, dammit. It wouldn't even be so bad if that were all it was, but the post office here is always crowded beyond belief. Let me give you an example of a typical excursion to mail a package at the local post office, just to set the stage here: 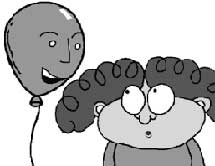 As much rage as this picture causes me to feel, it is nothing compared to the post office.

2:00 PM- I leave home for the post office to mail a package. I am happy to leave because it means that I won't be beaten again for not having made Rich pancakes.

2:05 PM- I arrive at the post office and park in the tiny, crowded parking lot. Four other people arrive at the same time as me and try unsuccessfully to hide the fact that they are racing to the door as fast as possible so that they don't have to be last in line.

2:06 PM- I enter the post office and take my place at the back of the line that stretches from the counter all the way through the large room, out the door, and into the lobby area. It would seem that 23 or so other people also have things to mail.

2:17 PM- A chubby man rushes into the room and yells, "When is the last pick-up time today?!" He is ignored. He shouts the same thing again. He is again ignored. People turn to stare at him. Finally, one of the men behind the counter exasperatedly says, "5:30. It's written on the box." The man leaves.

2:26 PM- I try to contain my rage as a small child bashes his Lego truck into my ankle over and over again. His mother seems to be in another dimension entirely.

2:33 PM- A woman at the counter realizes that she has forgotten to put stamps on all 40 envelopes she is about to mail, so she stands up there and does it. Very slowly and methodically.

2:57 PM- I have finally communicated to the post office worker that I want to mail the package that I have set on the counter in front of him.

3:04 PM- I have finally communicated to the post office worker that I do not need a signature confirmation on the package.

3:10 PM- I have finally communicated to the post office worker that I will be paying with a credit card.

3:20 PM- I complete my tedious transaction and try not to step on anyone on the way through the crowd that is still waiting in line. 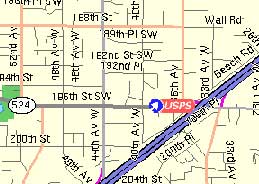 Thank you, US Postal Service.

I know that you will probably think that I am exaggerating about the time that it usually takes for me to mail something, but I assure you that I have never exaggerated once in my life, ever. Going to the post office is less fun than watching a wacky episode of "Golden Girls" while being fed tuna fish and hair on an ice cream cone.

To top it all off, Rich and I went on a search for another post office today in the hopes that they'd let us drop off our box of shirts and fingers without yelling at us. We found a post office locator on the USPS website which gave us this lovely map. NOTE THAT THE POST OFFICE ON THE MAP IS AN ENORMOUS RECTANGLE THAT TAKES UP APPROXIMATELY ONE ENTIRE BLOCK.

We drove around for about an hour and a half looking for this dumb post office and it turned out to not even be on the street that the map said it was on, instead being located in a back alley strip mall with a parking lot full of riced out Geo Metros. When sheer luck allowed us to finally locate it, we took the box of stuff in and the guy behind the counter was creepily friendly. He didn't say anything about having to mail it from the post office that contained our PO Box, but he did smile. He smiled a lot. With teeth. He looked hungry.

I am not sure that there is anything I can do other than blow things up to solve the problems that the US Postal Service seems to have. They are unfriendly, always seem to be understaffed, and seem to have no sense of why things operate the way that they do. I suppose that these problems are what lead postal employees to shoot large groups of people for no apparent reason, but I only ask that they mail my stuff before they do that. Then again, they are a government office, which means that things will not ever get any better but will in fact get worse and that at some point there will be a large tax scandal involving some stamps that don't actually exist. In the mean time, I suppose that I will have to make do with the way things are because my other options (tying envelopes to the necks of bears or shooting them out of a large cannon) would take years to perfect.