Hello, Ryan. You don't know me, but I know you.

I watched last week as you purchased the tablet you're returning. Our sales associate Dan recommended the Samsung Galaxy Tab S4, with its 64 GB hard drive and excellent software bundle, but you insisted that this ASUS Zenpad 10 had all the features you needed. Did you truly believe this, or did you secretly enjoy giving Dan a smaller commission? Don't lie to yourself. Lies brought you to this counter. Only the truth will allow you to leave.

We're going to play a game. If you follow the rules, you might get the $204.99 refunded to your credit card. If not, I'm afraid I'll have to put it on a gift card which will expire in 90 days. Are you ready?

First, I'll have to see your receipt. You probably thought you'd never need it. Funny how people can take something so simple, yet so precious, for granted, as though they've somehow earned it. But you haven't earned anything, Ryan. That earning starts now. I'll also need your protection plan number. You're probably wondering where that is. I'll tell you where it could have been: on your phone if you'd downloaded our mobile app.

Next, I'll need two forms of identification. You only brought one, didn't you? Not surprising for someone who barely knows himself. Until now you've been a consumer, searching for the hottest deals on brand name electronics, but if you searched your own soul what would you find? I see a naive, arrogant man unacquainted with the Oculus Rift and a true home theater experience. I also see a flag on your account. The question is, how far are you willing to go to remove it? 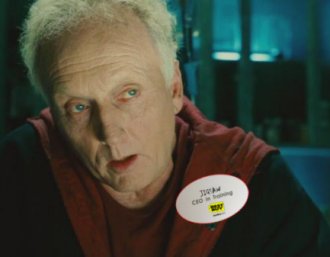 Let me see the tablet. Is the original packaging intact? Many customers return items with the bubble wrap missing, probably because they're missing something themselves. That's why I cut a Best Buy tag from their receipts. Not because it prevents them from filling out the guest satisfaction survey but because what they lack cannot be bought, even with loyalty rewards points. Life, after all, has no loyalty, no rewards and only one point: survival. Those who understand this can endure my tests. Those who don't will be crushed like an old man on Black Friday.

You're frowning at me. You must think I'm a monster, and you aren't the first. Some have compared me to the Geek Squad, but I despise their methods. They leak dick pics on returned tablets indiscriminately. I give my subjects a chance not to have their dicks appear online. You still have that chance, Ryan, just like all the others.

It's time for the final test. The computer is searching your purchase history for past returns. If it finds too many, I'll have to inform my supervisor. The search should only take a few moments. I suggest you savor them. Only when time is finite do we appreciate its infinite worth.

You probably think I'm enjoying this. I'm not. Not any more than I enjoy the cancer eating away at my body, or the larger cancer eating away at our society. I provide a cure for that cancer, but only to those willing to take it. Open your eyes, Ryan. When you're drowning, only another drowning person can save you, especially if they've already drowned. On the inside, that is. Make your choice.

Oh, it looks like your return was approved. But did I mention restocking fees? Oh yes, there will be fees.