Mine Your Own Business, Muckrakers! 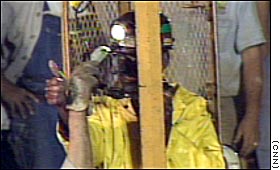 This miner is riding on a damn high horse.A lot of talk has been made recently about a group of nine hip new faces in the world of fame and celebrity. Reporters are hounding these people non-stop, trying to get even the tiniest shred of information on them. Even as they run into strong resistance, the press is covering the group endlessly, hoping to get but a taste of their presence. But what did these people do to get so famous so quickly? Are they the newest pop boy band fad? Could they be a hilarious comedy troupe taking the world by storm? Did they invent the world's wackiest water slide, one that has the perfect balance of full tube and half? No, no, and double no. These people did nothing so glorious. Their fame is the worst kind, that of the ill gotten variety. Not even so much as raising a finger to publicize themselves, reporters swarmed them like flies to doody. The group's sudden and ridiculous rise to fame came as a result of simply being trapped in some stupid coal mine.

By now, one would think the very idea of getting trapped in a mine would be passe. While it may have been ultra rad in 1857 when coal was all the rage, we're living in at least the 1890's, if not beyond. The news community should be over it by now. But lo and behold, they're enamored by it every time something like this happens. Turn on CNN, you'll see the mine. Open your newspaper, you'll see the mine. Get trapped in a mine, you'll still see that stupid mine. If you can show me a person who isn't tired of this played out mine craze, I'll show you a clever ending to this particular sentence. Chalk it up to a lack of stories, but this "news" is getting way too much time in the limelight. So they got trapped in a mine. Big deal. I'm trapped in a life ridden with depression and monotony, but do you see reporters swarming to cover information about me? Just because the miners "lives" were "endangered,"that makes them some fucking big shots? Apparently the muckraking press seems to think so.

Besides the fact that being trapped in a mine is boring news, the entire coal industry itself is stupid and wasteful and deserves no media attention. The secret that Big Coal doesn't want you to know is that the Earth's deposits of the prized fossil fuel were depleted years ago. When the Coal Barons realized their supply was running low back in 1972, they hired a team of brilliant German Nazi scientists to recreate the dinosaurs from secret deposits of DNA hidden in mosquitos throughout the Tri-State area. You see, coal is a "fossil fuel" because it is made of ancient flora and fauna after millions of years of transformation. Figuring the only way to bring back the coal was to bring back the mighty thunder lizards themselves, the Coal Giants funded the highly advanced Nazi research. After tireless hours of work, the team came up with a machine that spewed out living, breathing dinosaurs ready to be turned into sweet coal. Using the advanced technology of the 1970s, they then figured a way to speed up the coalization process, which involved burying the dinosaurs in a mountain which would later be mined clean. While it is all good in theory, the dinosaur machine in practice is a highly energy intensive device which requires large amounts of power to run its massive dual engines. The kind of power that can only be provided by coal. All the coal made from these dinosaurs began to get reused right back into the dinosaur making machines, creating an endless cycle of consumption. Thus, the entire industry is one big sham, endlessly killing dinosaurs and wasting coal at an exorbitant rate. Coal which would better be used fueling steam engines from the 1800's, and dinosaurs which would be better used wreaking havoc on a remote island in the South Pacific or in theaters that perform the terrible musical "South Pacific." Why should such a wasteful industry get such good publicity? "Come get trapped in our mines: You'll be a STAR!" I think not, coal industry! 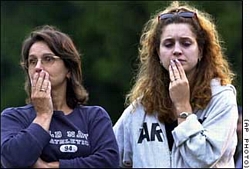 Sexy miner groupies wait outside the mine for their heroes.People work for years to become famous, usually with nothing to show for it but shattered fragments of their pride and dreams. They work tirelessly perfecting their skill at the mandolin, or working to build a better tomorrow out of plywood and love, and it's all for naught. How must they feel when they see some hotshot buried in a coal mine somewhere, sitting on his ass and reaping the benefits of fame? The press is a fickle beast, and any time some fresh faced newcomer gets trapped in a mine, or falls down a well, or gets buried in a prison of ice, or swallows some fantastic object, they become the press' new golden boy. While those who deserve it are starving and rotting in obscurity, these miners are getting the sexy groupies and endorsement deals that we all crave. Of course, this could be used to the advantage of a clever individual, who's willing to take some risks in life. People who know that it might take being buried alive to score that recording contract, or the perfect audition. Think about it...if you got buried in some horrible factory mishap somehow, people would be swarming all over, giving the attention you so very dearly deserve.

Be that as it may, it still isn't right for the press to cover this situation as they are. They're only adding to the problem by glorifying this situation. Kids will see their TV lighting up with action packed shots of mines and drilling and want to be just like their new television heroes. What's to stop them from burying themselves in local tar pits or caverns? Nothing, that's what. The more the press justifies mine-trappings, the more incidents we'll likely see. I know I want to be trapped in a mine already, and my hunger for it will only grow as the days and weeks pass. Sure, the workers may have been rescued, but the dream will live on in the hearts of the youth. Remember how kids responded to the show "Jackass" by murdering their friends and families? Similar crime waves are bound to start relating to this new hit wonder, and when you find your whole neighborhood buried in one huge coal mine, don't blame me. It was your indifference to the problem that did that to you, nothing else.

With all this endless talk of celebrity and fame, one would think it would go to the heads of the nine miners. Well sir, it already has. It used to be about the mining. Now, they seem to be doing everything they can to get away from what made them big in the first place. I guess that's always the case though. When they're in the mine, it seems like nothing can touch them...not even rescue workers. But when they finally leave it behind, the media will forget all about them. Even as they go along on their solo projects, such as getting buried beneath a pile of bricks, or being locked in a bank safe, nothing will compare in popularity to the original event that shocked the world. Sure, these new endeavors might satisfy them better creatively, but by then the press will have a new poster child stuck in an even tinier hole, and he'll get all the attention. Then the Coal Mine Nine will realize that they've been left in the dust for good, turning to booze and drugs. It's better to stay out of that "trapped alive"scene altogether, man. It does bad things to a person.