In November of 2004 a videogame entitled "JFK Reloaded" stirred up a firestorm in the media. The game allowed you to spend roughly a minute in the Dallas Book Depository as Lee Harvey Oswald. The stated intent of the game was to help disprove multiple shooter theories by allowing a person to recreate the seemingly impossible bullet trajectories during the assassination of John F. Kennedy. The usual suspects in the media erupted in the usual outrage. Ted Kennedy was understandably upset and Joseph Lieberman was unsurprisingly even more upset. It was another example of outrageous violence in videogames. Why, it was a trainer teaching kids how to kill the president! 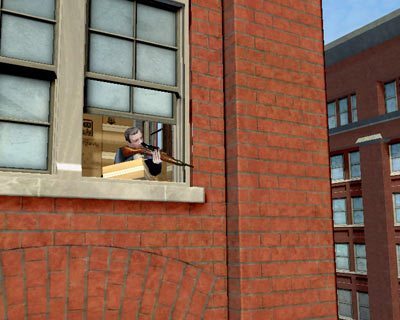 While the politicians flew off the handle the press reported the controversy dutifully. A few editorialists layered on the melodrama in pretentious columns about just how disturbing they found the game. Slate columnist Clive Thompson poured his heart into an article about how utterly wrenching he found the experience of JFK Reloaded.

As a physics simulation, it's remarkable.

But as an experience? It's nauseating.

When I play blood-soaked shoot-'em-up games, the vamped-up violence doesn't really bother me […] But JFK Reloaded is different. When you peer through the rifle scope, the faces of JFK and Jacqueline Kennedy (and Texas Gov. John Connally and his wife Nellie) are completely recognizable.

Bloggers mostly treated the game as a grotesque, although most also mixed this sideshow spectacle attitude with a generous helping of indignation. The blog Subzero Blue lamented:

This is so insensitive and disrespectful!
I can't believe some people have gone this far and this low.

The thought is scary. I can sitting here at my home download and buy the game from the Internet and have fun all day long shooting the ex-president for pleasure. I would not want to be in that seat. There has to be some limit… virtual characters are ok. But JFK: Reloaded definitely crosses the line of decency.

A lively discussion of the game appeared on Sean Hannity's forums and even people who could never play the game commented on it.

Of course, they haven't made a MacOS version, so I can't report on the game for you. What an odd way to, umm, honor someone on the anniversary of his death.

What do the people who actually bought and played JFK Reloaded think about the game? Mostly they're just sort of irritated that the company that made the game abruptly closed their doors, stopped selling or supporting the game, and disappeared off the face of the earth. I got the chance recently to play a copy of the now apparently abandonware JFK Reloaded and I have to say, all of the negative press aside, it is an extremely amusing game. 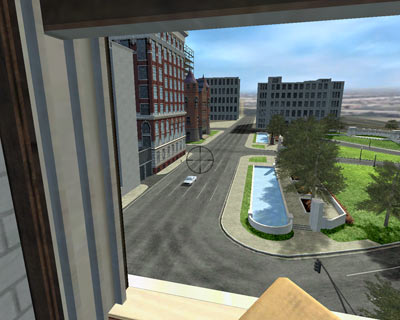 In JFK Reloaded you're supposed to accomplish the nearly impossible task of exactly recreating the JFK assassination, bullet by bullet, wound by wound. But once you realize doing so is nearly impossible you're going to want to just go wild with the game. Holy crap is that rewarding. The JFK assassination is a fertile playground for the imagination. You've got a motorcade, some incidental Dallas traffic, a legion of Secret Service agents, and loads of politicians and dignitaries. The crowds are unfortunately gone, but we can forgive them their crude engine. Not a lot of big money backers were probably interested in funding a massive production budget for a game with one level that lasts one minute. Oh yeah, and the whole "game about killing the President of the United States" thing might have been a deal-breaker as well.

The scenario is loaded with pathos. You saw Jackie O climbing onto the back of the limo or cradling her husband's brain. You've seen that damn flap on JFK's skull pop open a thousand times. Every frame of the Zapruder Film is pretty much burned into every American's memory over the age of about 16. With its simplistic physics and "chaotic traffic" option the possibilities of that one street and that one sniper rifle become nearly endless. 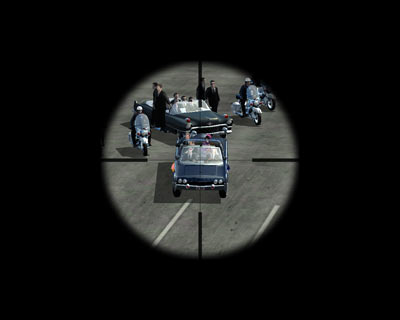 Imagine, rather than Lee Harvey Oswald's bullet flopping JFK's brain open, you get this scenario:

Oswald shoulders his rifle on the sixth floor of the book depository and takes careful aim at the driver of a sedan. The motorcade is still a block away, but Oswald has an itch and he wants to scratch it. He fires once, striking the driver in the throat. The occupants of the car blandly look back and forth as if unable to comprehend their dead companion.

The motorcade rounds the corner. The sound of gunfire is still echoing across the grassy knoll and the Secret Service agents fear for the president's well being. One of the agents rushes from the chase car and leaps onto the back of the president's limousine.

"It will be okay, Mrs. Kennedy," he reassures the First Lady.

She swivels her head back and forth smiling broadly. The president continues to wave to vacant buildings. The driver of the limousine slams on the gas. He has to get the president to safety! But alas, the driver is so focused on the flight that he fails to notice the car stopped directly in his path. The limousine slams into the idling vehicle at great speed and the occupants are hurled from the vehicle. President Kennedy slumps on the ground. Jackie O sprawls across the pavement like a pink stain. The governor is dead and has lost his hat; his wife has speared through the windshield and buried her face in the limousine's hood.

The chase car containing the Secret Service agents respectfully stops just before driving over President Kennedy's lifeless body. They wait, hoping that the man they are charged to protect leaps to his feet miraculously unharmed. A motorcycle cop zooms to a halt before the body of the governor. He wonders if Dallas will ever be the same.

Further back in the motorcade panic erupts. A car full of dignitaries careens out of control and zips around the chase car. The driver sees the motorcycle cop but he can't stop in time. Car and motorcycle collide. The motorcycle tears through the remains of Governor Conally and then slams into Jackie O. Her pink corpse is propelled straight up into the air like a rocket. Oswald watches with amusement as she cartwheels thirty feet into the air. She never loses that pillbox hat. More cars keep coming. Some strike the limousine; others crunch over more hapless motorcycle cops. They all manage to somehow avoid the chase car, but nothing else will stand in the way of their escape. Then come the busses and all is lost.

It's a dark day in Dallas.

JFK Reloaded is so simplistic and limited that it's amazing you can have this much fun with it. The only experience I can really equate it to is when I found out you could stand on the roof of the parking garage in Grand Theft Auto III and pretty much endlessly attack pedestrians and police on the streets below. Almost every play-through of JFK Reloaded is hilarious. Even just shooting a single driver can turn the whole thing into a mess of flying cars and airborne ragdoll politicians. The stock grins on the faces of Jackie O and others are frozen amid the chaos. Unlike giant pussy Clive Thompson I find the pleasure they take at the madness surrounding them somehow heartwarming. The way Kennedy just waves and waves to absolutely no one amid gunfire and out of control mass transit busses is a tribute to his stoicism.

If you can find a source for the now abandoned JFK Reloaded I highly recommend that you check it out. In the meantime you can enjoy some videos of me causing havoc in the streets of Dallas. The third video shows the incredible power of the replay system to allow scholars to relive the direction of skull fragments bursting from JFK's exploded brain. If only all of the people's heads would explode in this game!

Save those videos rather than streaming them or they may not play correctly.