The Chronicles of Jasper (Act III) 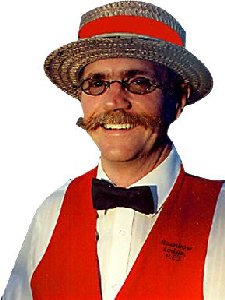 "Every existing thing is born without reason, prolongs itself out of weakness, and dies by chance." – Jean-Paul Sartre

The horror of my existence is only offset by the delicious ice cream that sustains me. I owe much to this cold confectionary treat, for not only does it fill my coffers with bundles of cash, but its sweet frosty taste whisks me away from this terrible planet to one filled with sunshine, giant seahorses, and elephants throwing snowballs with their trunks -- if only for just for a moment.

Alas, my hatred for little children is growing. They do not care for ice cream like I do. Sure, they hand over their miscounted change everyday at the jingle-jangle of my bells, but they do not respect the ice cream. Rather, they smash it into their filthy maws, not even bothering to savor the taste. The little beasts only consume, like an endless colony of chubby termites. They seem to reproduced overnight, feeding off the ice cream and then going off to some dark hole where their back bubbles with tiny embryos, growing quickly until they burst forth, creating soulless replicants whose sole purpose is to eat ice cream and drive me mad. If their parents and local police weren’t watching me closely, I would throttle their little necks until their misshapen skulls snapped off, or just smother them with my blustery mustache. I don't know how much longer I can take this.

The only thing that was keeping me sane was my good friend Fitzgerald, who I adopted last winter when I was feeling lonely and needed some help in the truck. He had been my anchor, my rock, always there for me in my darkest moments. Sure, he doesn't talk much unless his Spongebob Squarepants program is on, but he is the only living entity who will share my company, and that I greatly appreciate. Even my guinea pig committed suicide after I finished reading chapter 14 of my manifesto to him one rainy night. I feed, clothe, and discipline him, and besides a few outbursts here and there, I felt that he appreciates what I've done for him. 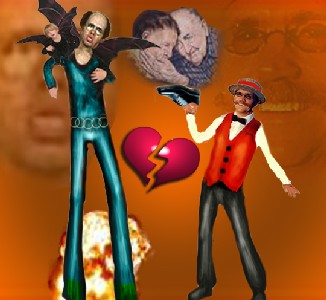 This all changed with one troubling incident. Fitzgerald was showing a streak of independence quite unlike his normal behavior of submission and fear. Last week I found an Otter Pop wrapper in the garbage, and questioned Fitzgerald about it since he isn't allowed to have any Otter Pops because it gives him the plop plops. He let out a high-pitched bray, his signal that he felt threatened by this confrontation. Still, I pushed on with the interrogation, refusing to be unnerved by his bared teeth or foaming mouth. It was obvious that he had broken Moses' law, so I disciplined Fitzgerald with my usual method: 50 blows to the face and arms with my shoe. Normally he cowers before me, whining like a mule and taking his punishment, but this time was different. After a smack of my shoe right between his eyes, he looked at me at defiance and rose to his full height of 9'4". The gills on the side of his neck flared, a warning that he was about to strike. I took this as a cue to flee, locking myself into the bathroom for the rest of the weekend. I had to survive on tap water and a bar of soap shaped like an apple.

After that I kept a safe distance from Fitzgerald. He didn't seem angry with me anymore, but clearly something had changed in him. While I was exiled in the bathroom he chewed my shoe into small tatters of leather, probably as an act of aggression towards the object of his turmoil. Those days of subjugation are over. For now on, Fitzgerald will be treated with respect and reverence, for I know he has the power to destroy me if he so wishes. A revolt is slowly churning in the oatmeal slurry that is his brain, so for now I will let him have his power. That is, until it is my turn to strike back and put him in his rightful place, for I am the master of the ice cream, and he is only a lackey to the frost god. You know what they say about flying too close to the sun? My anger burns like a thousand fiery stars, and I fear soon Fitzgerald's wings will falter, causing him to tumble into the black chasm of oblivion.

Besides the troubles in the Jasper homestead, things are going fantastic on the romantic front. I joined the Internet last winter and posted my picture on a website called Myspace. I was surprised how fast I was able to find friends, but most of them thought I was a joke or "gimmick" and applauded my dry wit. This was very upsetting to think everybody saw my life as an ice cream vendor as a joke, so I dumped all my friends and was alone once again.

Then I saw her. She was like a flaxen doll, discarded by a careless society that didn't have the vision to recognize her true beauty. Her black hair and makeup only accentuated her woeful demeanor, and although our styles of clothing were much different, I felt an instant bonding of our souls. It's like we have felt the same fears and cried the same tears. She says she cuts herself to see if she can still feel in this corrupt world, and this alarmed me greatly. She needed somebody to hold her close and keep the demons of this world away, while feeding her sensitive little mouth some cold ice cream. I felt that person was me. I could feel it in my heart and sometimes in my testicles. 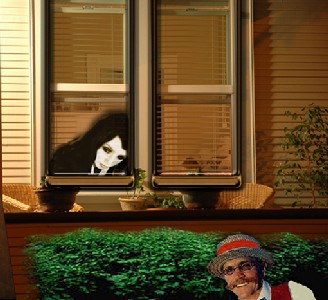 I wrote her many heartfelt messages over Myspace, telling her how I really liked her poetry and profile background of the little devil breakdancing. I do admit that I fibbed a little and told her that I was a fireman instead of an ice cream man, but both professions involve driving a truck into neighborhoods and saving lives, so as far as I'm concerned it was a white lie.

She played hard to get, as most tricky women do. And I should know. Before I shunned the temptations of the flesh during my spiritual cleansing in the late 80's, I would play these amusing and childish games with women in the park. They would sometimes run from me, kick me in the breadbasket, or spray me with irritating chemicals, but in the end I almost always won them over. My romantic escapades were put to the stop by the local police and taskforce looking for the "ice cream stalker", and after a few years of making road signs, I swore off women forever. I decided they were Satan's messengers, whose goal was to bring about the downfall of mankind by making fun of our deformed and crooked extremities.

But this one was different. She never answered any of my messages, but know that she felt the same way I did. Thanks to the help of my robot "Lord Buttons", I was able to track down her address so I could pay her a visit. I brought her a bouquet of dead roses, but I was too nervous to knock on her door, and besides her parents were home. I could see her large drunken father scratching himself and watching some pagan sport. I hid in the bushes underneath her window, savoring the sound of her confusing electronic music and the sound of her sobbing. I wished I could take this little angel of sorrow away from this terrible planet to my ice cream fantasy world with the seahorses, elephants, and dancing snowmen. I sat there all night until she left in the morning to go to the mall for her job as a cashier at Hot Topic. Then I snuck into her bedroom and ate a pair of her dirty socks. I think I'm in love.

Despite my newfound love, God is still tormenting me for having sworn my allegiance to the fallen angel, Lucifer. Our war continues unabated, invading my life on a daily basis. As I am serving the young goblins cold snacks from my truck, I am struck with an agonizing pain my stomach and groin. I scream out profanities towards the Lord, refusing to fall to my knees before him. This scares the children and they flee, for I think they have the ability to see the angels of vengeance striking my belly and groin with their flaming swords and giving me painful ingrown toenails. These are just some of the blights that our so "gentle" Lord has smote down upon your gentle Jasper. Welcome to reality, kids. How do you like your God now? Why would I follow such a cruel entity, when my lord Satan gives me great power? My heightened senses of smell, taste, and dust mite allergies are just some of the new powers granted to me. I also can jump 10 feet vertically and chill ice cream with my mind. He cares for me and loves me, unlike the Jesus ghost or my alcoholic, abusive mother. Even my retard, Fitzgerald, has turned against me. There is nobody left to depend on.