Stock in flopsweat was taking a sharp upward turn at CNBC studios, and that could only mean one thing. Mad Money with Jim Cramer. The studio lights illuminated his Leninesque visage. Five minutes till showtime and alreay beads of sweat were queuing up on his forehead and cheeks. Usually they waited until the Lightning Round before finally making the plunge down the sides and back of his shirt, or off his craggy beak. Jim reached under the desk on set, and into a drawer labeled "100,000 SWEAT TOWELS FOR JIM. SHEESH."

"The latest figures indicate that as the line goes up

"Five seconds Jim." He braced himself against the desk and bit his tongue as hard as he could to piss himself off.

"I'm Jim Cramer! Today on Mad Money I'm going to scream at a telephone, throw a chair across the studio, belittle a CEO and come one hour closer to my inevitable coronary! Somehow this is going to result in you making money! I burst a blood vessel in my eye last night during a relaxing dream! Let's take some calls!

"It looks like we've got Ann Marie from Roswell, Georgia on the line. Get me someone with a shorter name, I'm living on borrowed time here! Tad from Newport Beach you're on Mad Money!"

"Sun Microsystems, keep it or dump it?"

"Tad have you been huffing paint thinner? Dump it like it fucked your brother! Folks, Tad here is proof that three's a crowd on the 21st chromosome. Andrew from Cambridge, talk to me!"

"Boo-yah Jim! The wife and I are huge fans. We've been watching you every day, and we think-"

"Andy? In the time it took you to say that, I made enough money to buy your house! Did you need something or did you just call to let me know how your day was going?"

"Should I be bull or bear on Aventis?"

"AVENTIS! The pharmaceutical company! I've been sprinkling their hypertension medicine on my cereal every day for the last two years and it tastes like victory! I say hang on to it, but let's get a second opinion!"

Jim executed a textbook elbow drop onto the bright red buttons of his sound effect board. The sound of sirens, cannon fire, and a stuck pig erputed in unison.

"That sounds like yes to me buddy!" Surprisingly enough, the cacophony that sprung forth in that instant actually did sound like a garbled version of the word "yes."

"Alright, these calls are causing my blood pressure to drop below that of a fire hose, and it's pissing me off! The Lightning Round is over!"

"Thanks for having me Jim."

"Shut up Terry! You haven't earned the right to speak on Mad Money! Terry, your company is developing a new treatment for rabies. Back in the 1960s, you used to treat rabies with a series of shots in the stomach! Have you ever had a rabies shot in the stomach before?"

"Well I have!" He screamed triumphantly. "Didn't do shit!"

"With the capital we've acquired so far, we've made great strides in develop-"

"I don't want to hear about it Terry! I didn't invite you on here to promote your little tea party, so let's cut to the chase! When are you going to start making money and stop making me sick?" 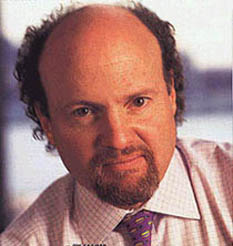 "Terry, you seem to have all the answers, so riddle me this, smart guy: Why can't I talk to you without yelling?! Terry, you can bleed out in an alley, I'm taking some more calls! Josh from Philadelphia, you're on!"

"Boo-yah Jim! My wife and I think you really are the Michael Jordan of the stock market, man!"

"You are what you eat Josh, what can I help you with?"

"Josh, don't you dare finish that sentence! You're turning my HIV into AIDS here! Ford Motor Company? They make the Ford Focus Josh! Have you ever played Project Gotham Racing 2 for X-Box? That car sucks! Get rid of it or get stomach cancer!"

Jim clawed at his face for about 30 seconds, and then began sniffing deeply.

"According to the pounding of my sinuses, I'm about 90 seconds away from one of my high pressure nosebleeds, and that means we're all out of time on Mad Money! There's a bull market out there somewhere, and I'm gonna help you find it right after I go outside and power wash the bird shit off the side of the building with my own blood!"

These are Dirty Days we live in

Do you like boredom? Great! I've got about three paragraphs worth sitting on the other end of this link!