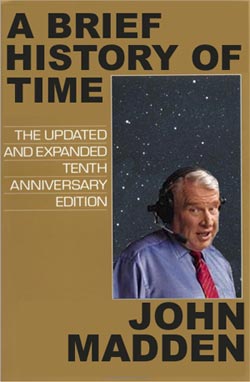 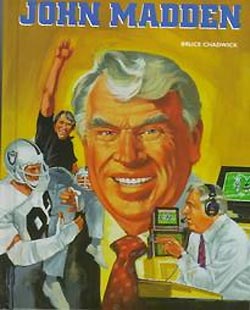 This is one of my favorite paintings ever it was done by Kurt Warner while he was riding on the back of a gazelle. A football player was giving a press conference. It was Daunte Culpepper during that blowout '04 season on the Vikings and he had just played a game where he threw for over 300. The press conference was winding down and Daunte started talking about the nature of the universe and how it relates to time. Daunte tends to do that when he's really in the zone. Really philosophical guy. Great guy.

So Daunte is giving this press conference and I'm sitting there eating a soft pretzel with cheese, these great pretzels from Ricardo with the jalapeno cheese, and I'm watching the press conference. Most of the media guys were packing it up. Daunte is talking about how the earth orbits around the sun and the sun orbits within the galaxy and all that stuff. We called him Professor Culpepper that year.

So this old lady stands up right after he finishes talking about quasars or something and she says, "This is all big time BS! The universe isn't like that at all! The Universe is really sitting on the back of a giant turducken." Daunte gets this far away look in his eye like the kind he gets when he has a torn ACL and he sort of smiles and he asks, "But what is the turducken sitting on?" The lady scowls at him and says, "You think you're so smart Daunte Culpepper, but you're not. It's turduckens! Turduckens all the way down!"

I gotta tell you I almost spit my pretzel out right then and there. Daunte just thanked the lady and left, but I was really moved. It was like the time Tyrell Owens jammed a towel into the vent on the top of the outhouse I was using and I blacked out from the methane gasses and hit my head and thought I was a cartoon. It was an epiphany! So then I wrote this book about the universe.

Welcome to the 2007 John Madden book about the universe! 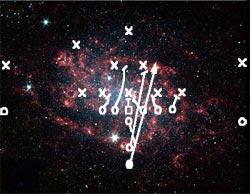 This is basically what the Universe did in the first quarter. The thing about the universe is that it's everywhere. You can't get away from it because the universe is all around us. That chair you're sitting on? In the universe. Pick up the phone and call Dan Marino who is in Tokyo right now doing a commercial for a Japanese car that drives upside down. He's in the universe. No matter where you go you're in the universe.

We need to go back to the beginning to really understand the universe though. Back before there was a universe and there was just this big exhibition game between the Steelers and the Bears and they're both running goal line ground plays. No matter what they just keep running these goal line plays. Nobody is passing.

The ball isn't moving. One or the other gets maybe a yard on a QB sneak but they don't run them much because it's preseason and there's no point risking your starter QB's neck on some expo game with a quarter capacity audience. Then all of the sudden the Bears, or the Steelers if you're a Steelers fan, decide to all of the sudden run a I-form fullback blast.

BOOM! Everything changes. The field opens up. You've got long yardage passes going every which way, long runs, both teams are racking up TDs. It's wild. That's the universe expanding, right there.

Hang on, you like corn nuts? I can explain it with those too. That's how I explained it to Marc Bulger when we got trapped together inside an abandoned refrigerator while we were hiding from ghosts. Let me go get a bag so I can remember how it goes. Back in one second.

You know I drive across America more than anybody else and to do it in style I have the Madden Cruiser (formerly the Doritos Madden Cool Ranch Cruiser, I'm working on a deal with Pizza Hut right now). When you travel as much as me you like to get everything in there that you need. I've got a double gas propane oven, a fold out grill, three refrigerators, a triple bathtub or something, an entire drawer full of dice, a machine that you pour nacho cheese into and it sprays it on my face to make me look good, all that stuff. It's all gotta travel with me.

Some people say, "John, I can't believe you fit all that in here" and I say back to them, "Pat," because most of the time I was talking to Pat Summerall, "it takes a lot of work to cram all this stuff in here, but I don't have anything on Troy Aikman." Then, if we're at a Cowboys game, we get out of the bus and walk over to where Aikman parks his Ford Bronco. It doesn't look like much but then when Troy starts it everything goes all bendy and there's this whirly type doodad that absorbs all light and matter. Troy can kinda reach into it and pull out whatever he wants.

I eventually got one of them for my bus and they're made by Nokia or one of those Scandinavian countries. They're called a wormhole and you can use them to travel through time and space. Basically its like a door. You go in one side and it's in one room and then you come out the other and you're in another room. Only with a wormhole it can be a billion mile long hallway that you can just reach across. I mean doorway. It's complicated. 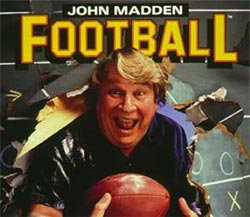 Did you know that I am the ultimate video game icon? Yeah, I hate those things. Bleeping and blooping, can't see anything. It reminds me of the time that Ahman Green was doing a cardio test and I was eating fried pizza. He watched me take a bite and he had a stroke and the thing behind him with the green dots started moving around all crazy and bleeping and I yelled It's only natural to want to understand the world around everybody and the universe around everybody. It's important. Our mind wants to unravel the mysteries like the sasquatch and Indianapolis running a play action pass on fourth and fifteen from their own 23. This is a good thing to try to understand.

Yesterday I was talking to Drew Bledsoe about raising rabbits. We were at the botanical garden eating these great schnitzels with black pepper and jack cheese. Drew got the cheese all over his long white beard and I started wiping it up but his beard was like steel wool and it was just shredding all of my emergency paper towels I keep in my fanny pack. Drew says to me, "I love rabbits so much" and he got this really intense look in his eyes. I stopped wiping the cheese out of his beard and I said back to him, "Yeah, it's like the universe."

Drew asked me, "What do you mean?" and I told him that it was just like a few weeks ago when Steve McNair was deep frying rattlesnake with me on top of a microwave transceiver in Brazil. I said to Drew, "Steve was just about to put the cream cheese in the rattle snake head and he said to me, 'John, this reminds me of the time that you, me, Donald Sutherland and Jerry Rice were rolling sushi in an Egyptian tomb and you had the seaweed soaking on a sarcophagus and Jerry Rice was deciphering cartouches and he said-"

And every time I remember that part where I tell Drew what Steve reminded me that Jerry Rice told us my vision starts graying out and I have to take a Haldol I got from someone on the Ravens and lay down. That's pretty much what the universe and it's bigness is like. So think about it.

Ah man, I feel like I have to use the john just writing all that down.