Horseshit of the Year 2006: Time Magazine 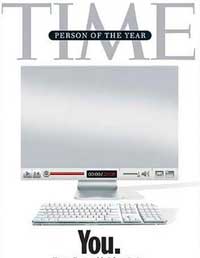 Thanks but no thanks! Time Magazine recently named us the most important person of 2006. At first I felt flattered and began to write my thank you speech but then I realized that the title was not entirely accurate. In fact if you read the article it's downright misleading.

The person of the year isn't me at all. It's the people who upload videos of themselves doing monumentally retarded things to YouTube or leave racist comments on blogs. The person of the year is anyone who has ever vandalized the Wikipedia entry on Sonic the Hedgehog to say that Tails takes it up the ass from Knuckles the Echidna and Sonic is jealous. Finally, the bread and butter of the Internet are getting the recognition they deserve.

The Time article embodies everything that is wrong with the Internet. I've never seen a bigger load of crap in my life. How much of a douchebag do you have to be write this kind of nonsense?

But look at 2006 through a different lens and you'll see another story, one that isn't about conflict or great men. It's a story about community and collaboration on a scale never seen before. It's about the cosmic compendium of knowledge Wikipedia and the million-channel people's network YouTube and the online metropolis MySpace. It's about the many wresting power from the few and helping one another for nothing and how that will not only change the world, but also change the way the world changes.

It's about the many wrestling power from the few? MySpace is owned by Rupert Murdoch's News Corp you journalistic clown. All those MySpace profiles featuring 16-year-old camwhores and pictures of you and your friends getting hammered on a Tuesday afternoon only make a giant corporation more money and make it harder for you to find a job. Thnx 4 da add!! BTW check out Family Guy tonight at 9PM eastern / 8PM central! its soooo rofl!!!

No see, MySpace was totally created by this computer programer who worked out of his basement with a couple friends who had a dream and it was just a small thing at first with a few pages but it got so popular and it's really a great coming of age story of a guy who never gave up and trusted his instincts like Fox McCloud in Star Fox 64. Fight the power! Oh give me a break. The few are still manipulating the many just as they always have.

The new Web is a very different thing. It's a tool for bringing together the small contributions of millions of people and making them matter. Silicon Valley consultants call it Web 2.0, as if it were a new version of some old software. But it's really a revolution.

Web 2.0 is the philosophy that creating content is for faggots so let your users do it for you. Those small contributions by millions of people add up over time to make something worth slapping an interstitial flash ad for LOW ASS MORTGAGE RATES onto. Long ago there used to be web sites run by people who actually created the things that were on those web sites. And you just read or looked at whatever it was. You didn't find links to 50 different web sites to discuss the article with other morons or post it on your blog for horses.

Oh god, it's become self aware. If there's one thing the Internet has taught me it's that people love to link to and comment on web sites. With Web 1.0 you could only link to a web site or comment on it. You could never do both. Now that the Web 2.0 revolution is here you can comment on links and then rate every single goddamn comment on the web site. Since Digg convinced users that their vote matters they spend all day voting down comments and registering multiple usernames to vote up their own links and I guess that serves more ads per click or something. Don't ask me how this crap works. I'm still trying to figure out Web 0.2a which came with 50 free hours.

I'm going to turn on my computer and make a movie starring my pet iguana? I'm going to mash up 50 Cent's vocals with Queen's instrumentals? I'm going to blog about my state of mind or the state of the nation or the steak-frites at the new bistro down the street? Who has that time and that energy and that passion?

The answer is, you do. And for seizing the reins of the global media, for founding and framing the new digital democracy, for working for nothing and beating the pros at their own game

I'm not sure this guy is clear on who is beating who here. The pros have finally figured out how to dupe the Internet into making content and money for them. Your dumb little video isn't worth creating a whole web site to slap ads on in an attempt to make a bit of change to spend on anime wall scrolls. But hey, you still want people to see it because you are thirsty for attention so you upload it to YouTube. It won't make them a whole lot of money but those little videos submitted by thousands add up as people go searching for them.

If you are okay with someone else making money off your work then by all means have a blast and upload the next episode of your videoblog masterpiece so you can get the attention you deserve, which mostly consists of Josh "Livestock" Boruff making fun of you. Eventually we'll find out that you're just a marketing scam designed to sell U.S. War Bonds.

These companies know exactly what they are doing. They are taking advantage of people's bloodthirsty desire for attention in order to make money on their work. I'm not saying it's a bad thing. I don't think it's unethical nor am I speaking out against it. But this idea that it's some kind of David vs. Goliath story and a revolution in world culture as Time paints it out to be is laughable. It's just another way for the "pros" to make money!

This revolution should be more accurately described as Corporate 2.0. These so-called social communities are thinly veiled platforms for massive advertising campaigns. More and more often Internet users are becoming confused about what's genuine and what is really a marketing scheme. Some do it well and are even welcomed by their targets and others get what they deserve. Next year the person of 2007 won't be us. It will be the viral marketer.

This is an opportunity to build a new kind of international understanding, not politician to politician, great man to great man, but citizen to citizen, person to person. It's a chance for people to look at a computer screen and really, genuinely wonder who's out there looking back at them.

I didn't know that the key to building international understanding was posting my cock pics on the Internet. I liked it better when I didn't know who was looking back at me through the computer screen. Well it turns out it's this very not worksafe guy. Behold, Time Magazine's Person of the Year!

The fun doesn't stop at the end of the article. Now it's your turn to shine! Just click any of the links below to share this Time Magazine article with the Web 2.0 community, effectively doing our advertising for us!

You can Sphere it, which makes something pop up with links to other Time articles not worth reading. You can Digg it, where you can make valuable comments for others to criticize. The next three told me to either log in or register an account, neither of which I did. And I don't know what an RSS feed is. I guess if you're in the kitchen and can't wait to haul your fat ass to your computer to get the latest news feed you can have it directly delivered to your deep fryer.

I guess the cultural revolution that Web 2.0 provides can be summed up in a billboard I saw the other day. At first I thought it was for a movie about a horse that nobody believed in but goes on to win the big race and surprise everybody but then I realized it was just a picture of Hilary Swank. It was for a movie called Freedom Writers and I noticed they were pushing a link to a YouTube page apparently sponsored by the movie. I'm glad that social networking exists so we can enjoy corporate sponsored discussions like this one. Finally, a movie engineered not only to be a box office disaster but a social disaster as well.