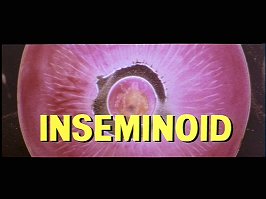 The Case For: You can watch the surprisingly decent first few minutes and then turn it off, leaving your imagination to fill in the rest of the story with something imaginative and wondrous and thought provoking.

The Case Against: Or you can actually watch the rest of the movie and feel another small portion of your soul die forever, replaced by the memory of a floppy rubber costume that pumps lager into women's wombs. 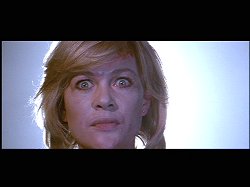 This stare encompasses about a third of the movie.People can have all sorts of crazy and irrational fears: the number 13, peanut butter, being ripped in half by a malfunctioning elevator. I am pretty sure that one of my greatest fears is fairly unique: every two weeks, I am afraid that I am going to watch a decent movie. Luckily to date this nightmare has not come true, but "Inseminoid" gave me my greatest scare yet. Despite the Z-grade title, the first fifteen minutes or so of "Inseminoid" resemble nothing more than a boring run of the mill 1970's sci-fi picture, the kind that people might catch on AMC and watch silently, unsure if they're allowed to express any displeasure or if doing so would make them look like an uncultured boob unversed in American cinema. Luckily, this doesn't apply to this movie, since a) I am pretty sure it's actually British in origin, so it can eat me; and b) it ended up sucking, much to my great relief.

Despite the initial scare, "Inseminoid" does succeed in fulfilling my two expectations for a movie of that title. First, that there's an alien that kills some people, which kind of sort of happens. Second, that there's some hot interspecies sex, which helps validate my existence by reminding me that at least I've never had to pretend to be knocked up by a big floppy piece of spray-painted latex. This sort of happens too, although it's not as hot as I had been hoping for. Nonetheless the title is a step up from the movie's original title, "Horror Planet," which while equally accurate as far as titles go, doesn't conjure up images of some sort of hulking alien monster ravaging helpless women and spraying his space-semen around. Not that I specifically look for that in movies, but hey, at least it's interesting.

The movie opens with some psychedelic imagery stolen straight from the nearest kaleidoscope and quickly moves to an alien world. "This is report 105 from xeno-archaeological expedition team seven," a voiceover intones. Shots establish some sort of rocky red planet which is never named, so I am going to just assume it is Mars. The voiceover continues, explaining that a scientific team has discovered a "vast tomblike complex" under Mars or whatever, presumably built by an ancient alien race. Surface temperature remains 89 degrees below zero, despite "the presence of two suns." OK, maybe it's Tatooine, I don't know. Inside a dark cave, an explorer in a biohazard suit named Ricky wanders around, shining his head-mounted flashlights at nearby walls while a cheap synthesized score blares. After marvelling at some rocks for a while he eventually comes upon a big piece of quartz, which starts flashing colored lights and then explodes, because what better way to ward off scientists than by doing something curious and unexpected? 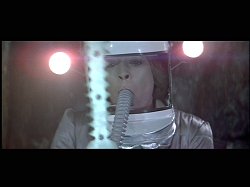 Next you pull the... no, take that out of your... no, stop, don't hold it that way... fine, I'll just trim the hedges myself.The other scientists quickly drag him out of the tunnels and while getting him out of his hazard suit they notice that he's holding on to a handful of small crystals, which they scrape into a jar. Then a couple of scientists go back down to the accident site and dig up another scientist, Dean, who I guess they finally noticed was missing when they did their buddy checks. They drag him out of the caves too and throw him on a gurney, where a doctor checks his pulse with a stethoscope, producing what sounds like a stable of screaming donkeys trapped inside his chest. The doctor pronounces that he's done all he can do and can merely hope Dean stays alive in time to be rescued, which is facilitated by shoving him in a bag and throwing him in a freezer, similar to methods used at many rest homes.

After everyone calms down, the scientists sit around talking about the ancient alien civilization they're researching. "The planet seems to be ruled by twins," one says. Apparently the scientists have found wall carvings indicating that everything on the planet seems to happen in pairs. "Maybe it's the two suns," another scientist pipes up. This dualistic symbolism is then used in exactly one instance in the rest of the movie, suggesting that while the writers remembered it later on, they just didn't care.

A little while later another scientist, Mark, is lounging around in his quarters when a fortyish woman named Sandy spontaneously enters the room and hugs him. "I love you," he immediately says, and she responds in turn, possibly because that's an accepted greeting in the future or because the writers wanted to beat us over the head with their relationship and couldn't be bothered to actually show it. While the two embrace, the lights in the room begin flickering on and off, and the two glance around and laugh it off, unaware that the wiring is rated for everything except inseminoids. As the two begin tugging at each other's clothes, the movie quickly cuts to the injured Ricky lying in bed having a wet dream for some reason, and then when the movie cuts back, Mark and Sandy are both naked from the waist up, hugging each other tightly. They continue to stand perfectly still with their arms winched tightly around one another for about ten seconds, possibly indicating some sort of love scene instead of a bizarre ritual, before the camera moves off them and zooms in on the crystals in the jar, which start glowing and spontaneously making Geiger-counter clicking noises. Ricky suddenly wakes up from his wet dream, which was so good that his hair has started falling out.

The next morning, all the scientists are sitting around when Ricky wanders through the habitat wearing a sealed space suit and makes for the airlock. "I have to find Dean," he chants, because no one told him that Dean was convalescing in the meat locker. The other scientists scream at him to stop but the kryptonite rays have given Dean superhuman strength, for he shoves the scientists out of the way before having second thoughts and running out through another door. All the scientists chase him around the habitat for about five minutes before Ricky finally manages to circle around back to the airlock and go outside into the caverns. Once outside he seems to forget what exactly he was looking for and ends up stumbling around in circles. I hate it when that happens.