Stop being mean to Joss Whedon!! NO 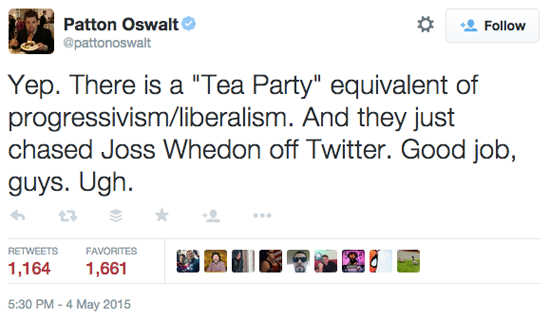 Here's an important story that real news sites have been covering: Joss Whedon got kicked off and BANNED from Twitter recently because of a ruthless cadre of trolls who said shit fuck about his big leather titty sarcasm teen girl secret agent from the latest joss whedon movie or tv show or whatever.

Some of Joss Whedon's previous projects have also attracted some controversy. For example, in firefly, the unpopular tv show where cowboy bebop and his pals have to buffy all the star treks, people said the robot character with the leather boobs was overtly sexualized. Supporters of Joss Whedon counter by saying she flips around and kills all the bad guys pshh pshh bam bam ahhh yeah fuckin sweet.

Another source of controversy was in Joss Whedon's TV show The Vampire One when a lesbian got killed by a big bazooka. Again, supporters of Joss Whedon deny this, this time by saying "Uh, Yeah, OK" in a sarcastic voice and holding up one hand in a "talk to the hand" gesture.

Joss Whedon has come a long way from getting Sarah Michelle Gellar to say sarcastic quips to monsters on the tv - now he gets Robert Downey Junior to say them to monsters on the silver screen, i'm talking movies baby!! As you can see, not only has the screen size evolved from tv-screen-sized to movie-screen-sized, the people saying the sarcastic lines have evolved from women to men. Who knows what people with three names Joss Whedon will be making say funny sarcasm owns in the future, and how much bigger the screen will be!

In conclusion, I think what all this shows is th- wait a minute. Apparently Joss Whedon said he didn't leave Twitter because of any allegations of sexism. But... but that can't be right. That would mean ostensibly legitimate news outlets spent actual resources reporting on the deletion of a Twitter account based on something that wasn't even true, and that's obviously impossible. haha