The Kennedys Mini-Series Is Bullshit 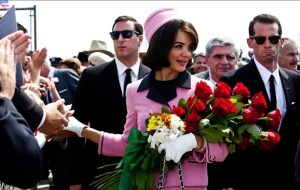 Ma'am, please hurry. Karl had another accident.I was looking forward to The Kennedys. After all, Oliver Stone's JFK was a pretty good movie, so a prequel was certainly welcome. Greg Kinnear as John Kennedy was an inspired casting choice, and Katie Holmes seemed like a natural fit due to her real world experience with ineffectually containing her husband's exploding brain.

Unfortunately, the finished product is so riddled with errors and creative liberties that it not only made me hate the actual Kennedy family, but my own family as well.

Take, for instance, the opening scene, where JFK wins the presidency. Barely three frames into the mini-series, we encounter our first inaccuracy as the presidential election has been replaced with a contest in which twenty candidates each plant one hand on the United States constitution, staying put until only one remains. The scene is certainly tense, with dramatic flourishes such as JFK pretending to sneeze on the constitution, goading Richard Nixon into raising his hand to protect the sacred document. 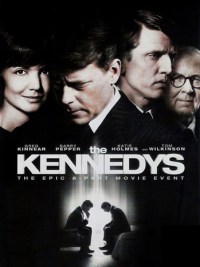 As entertaining as it might have been, that scene set the stage for eight hours of poorly researched trash. Don't even get me started on the vice presidential selection process. Ugh I'm pretty sure they didn't even have Laser Tag in the 60s.

Let's skip ahead to the mini-series' version of the swearing-in ceremony. After researching historical photographs, I can say with a fair amount of certainty that JFK was NOT wearing a blue prom tuxedo. As I recall, he was in fact shirtless, with a pair of sensible jean shorts and a tasteful green poker visor. As the ceremony concluded, Satan did not nod to himself with a smile, and there was certainly no cgi rabbit tearfully whispering to himself "This man is so inspiring, I can only hope that fifty years from now there will be a movie named 'HOP', a delightful comedy for the whole family."

To be honest I don't know a lot about Bobby Kennedy, but the subplot where he was being hunted by velociraptors didn't seem very likely. First of all, time travel is impossible. Second, he would have had to travel to the past to encounter dinosaurs, not the far future. Finally, I doubt that Bobby would have the strength and speed required to shove all three velociraptors into the path of a meteorite before diving to safety behind a car door.

The most touching moment in the mini-series comes when Jackie comforts her husband, uncertain about the future following the frustrating Vienna Summit. It is a sweet, humanizing look at two larger than life figures. It is also, however, highly unlikely that the couple owned bear suits. Even if they had, would they have transported the garments (complete with oversized heads) to Vienna? I don't know. Somehow that part didn't ring true.

Perhaps the most blatant bit of history rewriting comes in the portrayal of the Cuban Missile Crisis. In reality, it was a thirteen-day period in which the U.S., Cuba, and Russia teetered on the edge of nuclear war. In the mini-series, it's a zany adventure in which Fidel Castro and JFK wake up the morning after throwing a party, only to find their missiles missing. With only hours until mom and dad get home, the unlikely partners are forced to clean up the house and find the location of those pesky missiles. 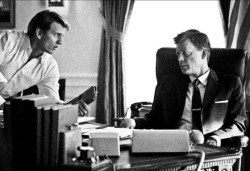 Sir, it's the robots. They've become too smart. We need you to destroy them with your karate before humanity is enslaved.What makes this segment beyond awful is the fact that it never comes to a conclusion that makes any sense. Halfway through, JFK and Castro throw a battle of the bands fundraiser to erase the national debt, and the missiles just sort of show up in the audience with a pair of hot bikini babes.

One of Kennedy's passions was the exploration of outer space. Though he didn't live to see his vision through, he strongly believed in the importance of sending a man to the moon. This is not brought up at all. In fact, there are multiple scenes in which Greg Kinnear replies to a wholly unrelated line of dialog by scowling, shaking a fist, and stating his severe dislike for discovery and space.

Finally, there's the assassination. It's understandable that the scene in question did not actually show Kennedy being shot. After all, turning that moment into a graphic display would be insensitive. I just wonder why they chose to use a slow-motion shot in which the camera circled the first bullet until just before the moment of impact, then cut away to a woman in the crowd vomiting then being eaten by a dragon.

If you go into The Kennedys expecting an accurate portrayal of history, you'll be disappointed. If, however, you're a fan of anything with an end credit sequence with lots of funny outtakes set to banjo music, you might just have the time of your life.