Kent was nicknamed "Tree City" due to the unappealing quality of other proposed nicknames that were much more accurate, such as "Sootsburg" and "Satan's Child Bride." But it's not the few remaining trees that make Kent the city that it is; it's what's in the trees. The complex ecosystem of Kent, Ohio relies on the substantial amount of trash thrown out of car windows and dropped onto sidewalks by busy college students with environmentalism on their minds. The topmost layer of earth in our city is a pure, rich compost made out of a mix of discarded Taco Bell menu items, chicken wing remnants, and first-year frat hopefuls who didn't quite make it through their elaborate hazing rituals. And two characters in particular take advantage of nature's bounty: 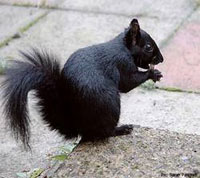 Move over, Carl! You've got some competition!The Black Squirrel

Kent may be missing the cosmopolitan touches of bigger cities, but that doesn't mean we don't have our own vermin! If the black squirrel looks familiar, you're not crazy; Kent's squirrels are just like your squirrels, except darker and stripped of any qualities that might make them not repulsive. And they're friendly, too; don't be surprised if you come to Kent and watch one of these mischevious little devils run up to you just to see what human flesh tastes like! Like all frisky woodland creatures, the black squirrel can normally be found cavorting and capering from tree to tree, or in the parking lots of large apartment buildings, lapping beer out of the hands of drunken fashion merchandising majors.

A fully-mature red cup. Take notice of the distinct markings.Each fall, thousands of tourists come to Kent to watch the migration habits of red cups as they nest on the lawns of student housing. We ask you, gentle visitor, to tread carefully, lest you step on any of our local treasures. If you should happen to come upon an injured red cup, please take the following steps to ensure the preservation of this proud species:

With your help, you can ensure the prosperity of Kent's most notable species. 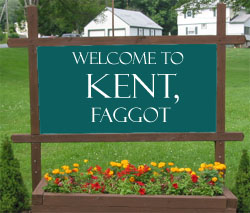 A proposed addition to our town sign.What would a city be without its own flavor? Much like how the Eskimos have 40 words for snow, we have a single word for everything: "faggot." At home, work, and Church, you'll find "faggot" shouted at passersby even if ol' Mr. Sun is nowhere to be found. Why, take a simple walk down any of our city streets, and you're sure to be greeted with a friendly "faggot," followed by a "motherfucker" or even a no-nonsense "I'll fucking kill you!" Sociologists may call this behavior the act of mental infants under the spell of sexual confusion and repressed rage, but what do they know? If boys will be boys, they can't get any more boyish than within the safe borders of Kent!

And ladies, don't think you'll be neglected. A simple strut through our neighborhoods in even the most modest of clothing is sure to draw loud, angry responses of how our men would like to violently rape you--and these fellas aren't shy about giving explicit details! But there's no need to be afraid; we simply have a much more traditional view of romance in our sleepy little town, and we'd much rather have you comply than tour the Cuyahoga River from the inside of a burlap sack!

We'd like to hear one good reason why you refuse visit the town where Mr. Mister's tour bus broke down on two non-consecutive instances. That's right; from our culture to our cuisine to our Carl, there's never been a better time to see what Southwestern Northeast Ohio has to offer. Oh, and we also have a University. But you probably don't want to go there.