It's no secret that reality television producers have been scraping the marrow of the barrel. They've been doing that since the first boiled horse anus passed between the glossed lips of a Playboy Playmate on Fear Factor. Now CBS television has reached a new and abyssal low with their latest offering.

Kid Nation, debuting this Wednesday, excretes 40 children between the ages of 8 and 15 into a "ghost town" in the middle of nowhere for a duration of 40 days. Together, mostly without adult supervision, they'll have to figure out how to live and rule over a suspiciously theme park like Wild West town stocked with jars of candy and tumbleweeds. According to the Wikipedia article on the taping of the show's first season, it also came fully stocked with unmarked bottles of bleach ready to quench children's thirst. 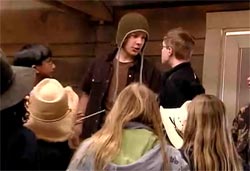 You have to give CBS a lot of credit for this ingenious idea, because no one is known for being more level-headed or less prone to violence than children. They're always rational and they never punch, hit, claw, bite, or spit on each other.

The kids come from all walks of life and backgrounds. The only commonality among them is that they all have horrible parents willing to sell their children's lives cheaply; each kid was paid a stipend of $5,000.

The outcome of the first season of Kid Nation is a closely-guarded secret. Despite the free form nature of the concept there will be winners, losers, and prizes. I have carefully analyzed the biographies available for the 40 children participating in the show and I am prepared to offer the most thorough and accurate predictions I can.

Jared Age 11 Telling Quote: "In the right hands power can be a very good thing." Why: Jared will be the first, or among the first, to die in Kid Nation. He is ambitious and hungry for power, but his young age and love of artwork do not give him a competitive edge. If he can swallow his hubris, he may survive for a time as a lackey or lickspittle for one of the bigger kids, but eventually his dumb face will get him on their bad side. How: Expect to see him dragged off by one of the ruler's guards in the first five to ten days. He'll be screaming, "I made you who you are! I believed in you!" No more will be seen or heard from Jared, until escapees from the pleasure pit find his sun-bleached bones beneath a pile of bloodstained rocks.

Nathan Age 11 Telling Quote: How would you change the world? "Eliminate the terrorism." Why: Every entry on Nathan's biography points to clarity of purpose and a strong belief in militarism. Nathan will "eliminate bullies" just as he promises to "eliminate the terrorism" and he also indicates he would like to trade places with the President so he can "edit the laws". Even though he is the same age as Jared, Nathan has what it takes to become king. How: Nathan will devise a simple message to focus hatred and suspicion on an individual or minority. A likely target is Anjay, the lone child of Indian decent, who will be placed in a reeducation or detention camp as a lesson of both power and mercy. Those who speak out against Nathan will be crushed ruthlessly, either by targeted whisper campaigns or through the use of violence. Nathan will keep two or more of the older children as his protectors, probably the easily-manipulated Blaine and the proto-stoner Greg. His rule will not be easy. There will be those who mount an insurgency against his oppressive regime.