Your Guide to Internet Criticism 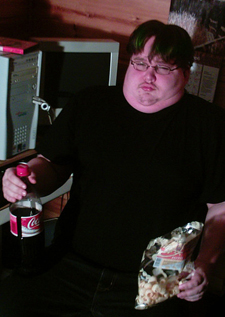 Raymond "Pillow Pants" Huffman at the Criticism Control Command CenterHello, all. Raymond "Pillow Pants" Huffman here, bringing you some shocking news. Are you aware that, at this very second, people on the Internet are criticizing things that you enjoy, or possibly enjoyed during your childhood? Even back in 1994, when a young "Pillow Pants" was enjoying the 14.4 kilobaud sights of Compuserve, this young Internet champion spent upwards of eight dollars a minute informing idiots that the episodes of Goof Troop which aired on ABC Saturday mornings were just as good as the episodes that aired as part of The Disney Afternoon programming block.

Today, we call this art "pwnage." And The Raymond "Pillow Pants" Huffman Institute of Pwnage, located in computer lab B43 of the St. Louis Assisted Living Community College, seeks to bring an end to criticism, the perverse art of people who only wish to make us feel bad about our passions: television shows, comic books, video games, and all other interests of those who can appreciate the entertainment of the elite.

We have no room for haters here -- or, as I say to my comrades, THIS. IS. SPARTA!

My humble Goof Troop-related origins soon escalated to the landmark 2005 case of Darkwing Duck v. Chip and Dale Rescue Rangers, when several morons on Toonzone's message board tried to argue that Chip and Dale was somehow an inferior show. So I employed my elite pwnage skills to the battle, showing that both series were equally as good as every other cartoon that has ever existed, ending my final post with the immortal, "You are made of shame and fail. FOR THE LOSE."

Arguments like this are the very foundation of the Insitute of Pwnage, which is why I bring my teachings to you today. The following five techniques I have developed over almost 20 years of protecting my hobbies from those who would speak ill of any facet of them. Used properly, these techniques will completely shut down all criticism, protecting your precious nostalgia and providing justification for your tastes that are so refined, everything is enjoyable. Let's begin. 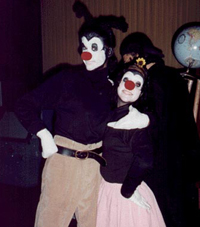 Even these fools cannot best me.Nothing infuriates a critic more than realizing that they will never aspire to create the very art that they criticize. For example, the only thing I'm fully able to criticize is boxing, since I have been repeatedly punched in the face on multiple occasions. But unless you, a single person, can outperform an entire production team of artists, writers, musicians, and Lorne Michaels, well, don't step into the ring with me -- unless you want to suffer 3rd-degree pwnage on 90% of your body.

Allow me to cite a 2004 Internet battle in which I was the clear victor. The subject at hand? The immortal battle of Tiny Toon Adventures v. Animaniacs. For those of you not deep in the trenches, like me, the tension between fans of these two shows can only be matched by the tension between the two kinds of people in the Middle East. A certain poster, fifi_lefume97, dared to claim Animaniacs was clearly inferior. Here, from the Institute of Pwnage's archives, is my response:

Inferior? The only thing here that is "inferior" is your attempt at criticism. After all, fifi_lefume97, what position of authority do you hold? Have you produced 99 episodes of an acclaimed animated series, ending with the masterpiece film, Wakko's Wish? I think not. Until you can come up with something that has the biting satire of Pinky and The Brain, or the sheer eroticism of Minerva Mink, you'd best hold your tongue. In other words,

A LOSER IS YOU. HOP ON TEH FAILBOAT

After this, most posters left the thread and it was locked hours later, leaving me the clear victor. 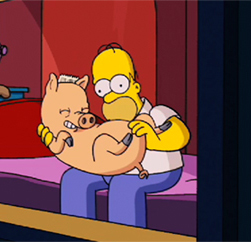 You don't like this? Keep it to yourself. I know all of you monsters out there thrive on negtivity."If you don't have anything nice to say, then don't say anything at all. Otherwise, you will be pwned."

As you should be aware, all critics on the Internet are bullies. Luckily, I've dealt with my share of bullies throughout high school and most of my twenties, so I know how their brains (heh, or lack of them) work (heh, or don't work). For me, someone detailing continuity errors in Mighty Max is the same as when Chuck Cardigan told me "You're a fat faggot" in ninth grade and then threw me down the bleachers several times. And whenever someone mocks the delicious wordplay in Firefly, I'm brought back to the multiple occassions when my mother tells me that my father shot himself because I was such a disappointment, and that maybe I should do the same thing he did before she comes home from work. Criticism is just the empty words of sad, sad people looking to hurt the feeling of those with the spirit of creation in them. How can anything constructive ever come from hurt feelings? You should know as well I as do that constant sobbing can hamper most basic activities.

I'm sure we all remember the anticipation leading up to the release of The Simpsons Movie just a few months ago. I was psyched for it, almost as much as Transformers (which the best movie I have seen this year, but equally as awesome as every other movie this summer). When I returned home from the cinema to write a glowing review -- and look for a hilarious Spider-Pig desktop wallpaper -- I couldn't help but notice that the haters were out in full force, as expected. Of course this group of miscreants only spent between 8 and 10 dollars each to see this movie just for the sake of hating it. They may have brought up "plot," "characterization," and "jokes," but all I saw was "hate," "hate" and "italicized hate." Did they not even think of the hurt feelings that they would produce if someone who worked on the film read their bile?

I only hope that Matt Groening wasn't on the Internet that night. And if he was, I hope that, like me, he has his own special place to cry.