KRUT-5 News: Is Your Man Cheating?

Bestselling author tells you how to catch a cheating man

Update: Since we originally printed this story, KRUT-5 News has learned that the individual quoted extensively throughout was not Lizzie Harcourt, author of The Guy Paradox: How To Catch Cheaters, Dump Losers & Survive The Dating Scene. Due to an error in communication, KRUT-5 News mistakenly interviewed Russell Barguss, a raving, undermedicated street person. KRUT-5 regrets the error, and we extend our apologies to Ms. Harcourt, Mr. Barguss and any reader who may have followed our flawed advice in good faith. 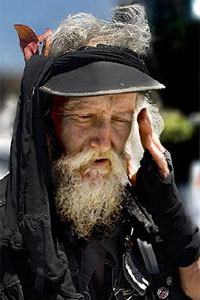 Author Lizzie HarcourtWhen it comes to cheating men, Lizzie Harcourt has seen it all: workplace flings, late-night calls and even red-handed catches. She may be unlucky in love, but she's spun her romantic misery into publishing gold: her new guide to the perils of dating, The Guy Paradox, is a top-ten bestseller.

KRUT-5 News persuaded Lizzie to take a moment out from her whirlwind book tour to give all the ladies out there some quick tips on sniffing out a cheater.

Does he freak out when you ask to see his phone?

Sexy texts and unfamiliar numbers have brought down countless affairs, but that doesn't stop cheaters from using their cell phones to plan hookups -- it's just too hard to cheat without them. If you're in a committed relationship, there should be no reason you can't borrow your beau's phone to make a quick call. If he's weird about giving it to you, there's probably a reason: "You never use them, can't use the phones," Lizzie tells us. "I call up my dead brother, what do I hear in the phone? I hear breathing, ticking sounds, then I smell chemicals coming out of the phone. The next day my brother was dead. The next day, my brother had been dead for six years. The whole time."

But even if you can't find any suspicious texts, he may not be innocent: "You ever look closely at a dollar bill, you try to read the numbers on the dollar bill? You can't. The numbers move around, reading is impossible. See that pyramid? Satan is a horse."

Does he come home looking a little too fresh?

Don't bother checking for lipstick on his collar or perfume in his hair -- we all know men can be forgetful, but few cheaters are thick-headed enough to come home reeking of another woman. Instead, check for subtle changes in hygiene: coming home freshly showered or with a different pair of boxers, for example.

Does he have a million excuses to avoid making love?

It's simple math: if he's getting his jollies on the side, he'll have less loving left for you. He may not be a cheater just because his sex drive decreases -- he could be stressed out at work or just getting older -- but the cagier he is about the reasons, the more suspicious you should be.

Says Lizzie, "The Shadow White House, White House Number Two. The real White House is not the real one. The president is a wax statue. They never elected a new president. George W. Bush = WAR GUSH BORGE. You think he gave up his power? Spell out the letters. Obama spelled backwards is ZOMBIE. You add up all the letters and it's 1212, which is 666 plus 666. He's made of wax. The REAL antichrist is Goro. Obama is an illusion, George W. Bush = Mortal Kombat = Goro = 666. This is principle 1, the secret war."

There's one important caveat, according to Lizzie: "I have proof. When I die, Agent Leguizamo will send a letter to every American newspaper. They kill me, secret war is exposed. Secret system to decode their secret war is The Pest. They kill Leguizamo, the vampires can't call home base, system breaks down."

Is he moody, distant, or constantly on edge?

Being a dog is a stressful occupation. The guilt, the secrecy and the fear of getting caught weigh heavily on a cheating man, so he's bound to crack up under the pressure. If your once-sweet man becomes gloomy and defensive, there might be a big problem.

Does he accuse you of cheating?

It may sound crazy, but guilty eyes always see the worst in others, too. If he's getting jealous and paranoid about absolutely nothing, Lizzie tells us he might just be projecting his own guilt on you:

"The Pest. T-H-E, P-E-S-T = 5-5-5, 2-2-2-2 = 777. Now look up that same number in the US Constitution. It doesn't exist. Redacted by secret war council, 1977. I am restoring pre-secret war constitution, dictated to be through radio signals by unknown parties sympathetic to Leguizamo movement. You must not interfere with my work."

You can pick up a copy of The Guy Paradox in any major bookstore -- but before you do, Lizzie Harcourt has one last piece of advice on how to catch your man cheating without driving yourself up the wall or acting like a stalker.

"Two parts salt water, two parts your own pee, plus pepper. You throw it on him, and if he's a vampire he melts."