Reno, Nevada. The city that is considered one of the best places to live hides one dark secret: The Reno Rollers. The littlest big wheel gang in the biggest little city.  While normal children were playing with action figures, the boys of Reno were playing a bloody game of monopoly as they creating a mobile empire on three wheels.

April 14th, 1984. A day that went from joyous to disaster in a blink of an eye as Luke Graves celebrated his seventh birthday. 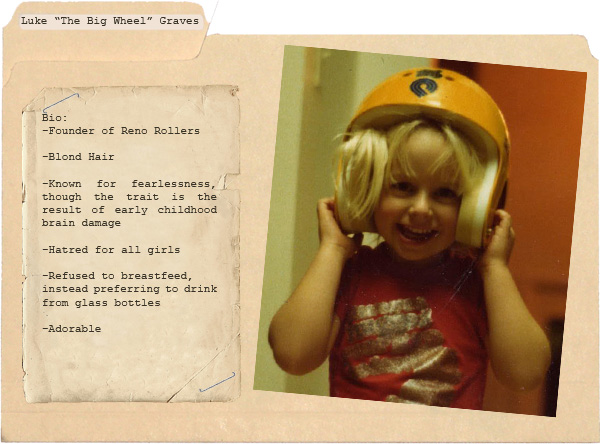 At around five p.m. Luke’s grandmother gave him his special present; forever changing the young man. Later, as cake was served, another young boy took the corner slice that was ornately decorated with extra icing and an edible flower. Luke, upset that the child took the superior piece of cake, broke off the tongs of his plastic fork in the boy’s eye. While the parents were trying to resuscitate the child, Luke took off using his new toy and escaped any sort of punishment. When he was finally caught by his parents, his endearing charm convinced them to let him off. Thereby starting the Reno Rollers.

Originally thought of as just a bunch of ornery kids, the gang quickly gained a reputation for stealing candy from gas stations and reselling it to children. Luke and his early followers were able to facilitate the majority of their crime through the use of Big Wheels.