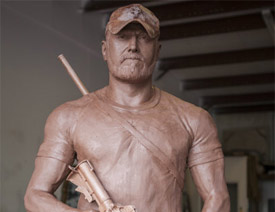 US Navy SEAL and number one most killingest expert sniper Chris Kyle was taking college classes between deployments in Iraq popping melons from record distances.

One of his courses had two professors and they were Bill Maher and Rachel Maddow. One day, Bill Maher told everyone that they would be having class outside. When class started, he shocked everyone by walking up onto a stage, looking up and stating, "God, if you are real, head shot me from 1.5 clicks using a 338 Lapua Magnum-chambered McMillan Tac-338 sniper rifle despite a strong crosswind. Go ahead. Sniper me off this platform while I stand here and do an illegal drug. You have ten minutes."

Sniper Chris excused himself from class, donned a ghillie suit, crawled onto a firing position overlooking the greens, carefully adjusted for windage and even temperature, waited for nine minutes and fifty-nine seconds to elapse, and then he sent 250 grains down range. Perfect head shot on Bill Maher. Red mist down to the lower jaw. Confirmed range 2.2 kilometers. He said a little "Booya!" to God before calmly returning to his seat. 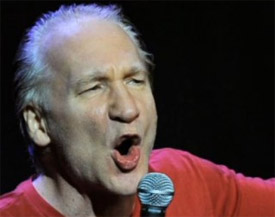 Rachel Maddow jumped down off the stage and jabbed a finger in Sniper Chris's chest.

"Why did you perfect head shot my atheist friend from a record distance and why is my witchy hag pussy so wet?"

Sniper Chris said, "God has his hands full protecting America's patriot warriors who are out protecting Bill Maher's right to say stupid shit like that, so he sent me down here to take the shot. Now put on a wig and pull down those man pants, I've got king hard meat after that topper and I'm about to go diesel raw on your fish pit."

So Sniper Chris went to town on Rachel Maddow, for his country, and he convinced her to renounce being a lesbian and to marry a baptist minister and have seven kids and spend her spare time researching her heritage as it relates to the confederacy.

Sniper Chris didn't have time to rest. He heard there was a flood in New Orleans and looters were running wild listening to vulgar rap music and breaking into the stores of hard working people. Sniper Chris Godzilla HALO dropped onto the top of the Super Dome. If it were up to him he would call in a couple of JDAMs on the place and let God sort them out, but all of God's air support was over in Afghanistan making sure dirt people who worship the moon get their hearts filled with western democracy.

Sniper Chris took out his sniper rifle and started dialing in targets. There were a lot too. It was like the jungle down in the streets of New Orleans. A real target rich environment and hunting season was open. First he spotted some armed teenagers disrespecting an American flag. He took them out with extreme prejudice. Then he saw some gang members with a drill trying to break open a bank vault.

"Oceans Three-Three-Eight," he said and head shotted them all. 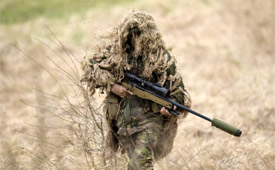 Later, at the Navy SEAL bar in Baton Rouge, all the SEALs were buying Sniper Chris drinks to celebrate his one millionth snipering and two super fine strippers had accidentally given him their real names. He was about to show them how he can put his 16 inch penis into two women in missionary position at once when the door to the bar banged open.

It was Navy SEAL, WWF superstar and former Minnesota governor Jesse Ventura. "Well if it isn't one of Dick Cheney's trained assassins," said Jesse Ventura. "Just another puppet in one of the Illuminati wars."

Sniper Chris's jaw tightened in anger, because he had heard Jesse Ventura rant about Dick Cheney and George W. Bush before. He got especially mad when Ventura talked about there not being WMDs. Because Sniper Chris had seen them before.

"I'm glad you're here, Ventura," said Sniper Chris. "I've got something to show you."